Dennis Manos picked up a Sharpie marker, a blank sheet of paper and looked at Aidan Connor ’22. Manos was thinking of an equation.

“The equation has to be smaller than this rectangle,” Connor said, demonstrating the size with his hands. “So don’t make it too big.”

Manos is William & Mary’s vice provost for research. A few minutes earlier, Jonathan Frey, the director of the Small Hall Makerspace, had stopped into his office to describe one of the makerspace’s latest creations.

“Well, I have to see this,” Manos said, moving down the hall to the Small Hall Makerspace, where Connor was putting in a shift as an MSE — makerspace student engineer. Now Connor, with no advance notice, was being asked to put on a demonstration for the university’s top research officer. 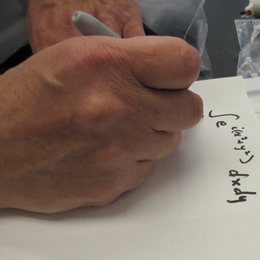 Connor took Manos’s handwritten equation — it wasn’t too big — and placed it under a gantry, a metal benchtop framework topped by crossbars that carry instrumentation horizontally across the working area. Connor took his time, carefully aligning and adjusting the paper in a room of people that had suddenly grown very quiet. Frey broke the silence.

“Yeah, that’s fine,” Connor said amid the resulting laughter. “My life is an instrument of your will.”

Connor pressed a key on a laptop and the gantry arm began to move, the scanners buzzing over the equation that Manos had just written. Almost immediately, an orange-colored marker driven by a second gantry assembly began rewriting Manos’s equation, adding an “equals” sign — and the correct solution.

It may seem that Connor and his group had put together the miraculous answer to the prayers of millions of struggling math students, but their mathbot is a product of creative engineering, not supernatural intervention.

“So what happens?” Connor said, sitting at the laptop to walk through an explanation for Manos and other visitors to the makerspace.

“This line is just a command for the camera to take a picture of the equation,” he said. “There’s some more, some other functions, but basically it sends that picture off to Mathpix API.”

Mathpix API, short for application program interface, converts the graphic into a equation in LaTeX, a widely used computer markup language. The coding then forwards that LaTeX equation to Wolfram|Alpha, which actually solves the problem. Wolfram|Alpha is a cloud-based multi-function analytical utility.

“At first it was just basically a computational engine,” Connor explained. “So you could give it a math equation, or ask what's the weather today? You could like, kind of look for trends or ask, what's the population of Detroit? And it was just like a knowledge engine. But since then, it's grown a lot.”

The entire class worked on gantrybot systems. Other group projects included a batterbot — a gantry-framed device to make custom-shaped pancakes. There also was a bot that converts a photograph or other image to g-code and then draws it. They used the William & Mary cypher for a demo.

The mathbot and others came out of a makerspace brainstorming session “at that table right there,” Connor said, indicating the birthplace of many an idea.

“We were talking about project ideas,” he said. “We were asking, well what would you want a robot to do? Someone said, ‘Solve math problems.’ So...”

Frey’s reaction to the mathbot demo didn’t seem to leave any doubt about Connor’s continued career as a MSE and his teammates can likely rest easy about the success of their project.

“It’s impressive,” Frey said. “From the mechanics to the implementation of the APIs to the homogenous construction of a system. It’s full-system design.”

“And,” Manos added. “It takes chicken scratch and turns it into something you can actually read."