In only 16 years, the Piney Grove Preserve, managed by The Nature Conservancy in Sussex County, has shifted from receiving woodpeckers from other populations to donating woodpeckers to establish a second population in Virginia.

This transition, accomplished in the timeframe of 2001 to 2017, represents an amazing turnaround in a very short period of time and is a testament to the valuable work of the Center for Conservation Biology.

From the 1950s through the 1990s, the red-cockaded woodpecker in Virginia experienced a catastrophic decline due to the harvest of old-growth pines and the lack of fire as a management tool. 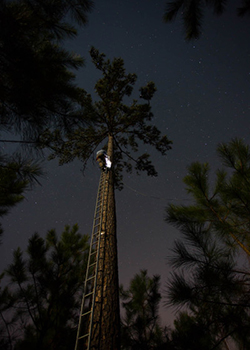 During the 1970s, 23 breeding groups were known across five counties. By 1998, when The Nature Conservancy purchased the first tract of timber to establish the Piney Grove Preserve, the birds were effectively down to one site with three breeding groups supporting 11 individuals. The species was in imminent danger of loss within the state – a loss that would represent a further and demoralizing contraction of its northern range boundary.

By 2001 with only two active pairs, it was clear that in order to stabilize the population aggressive management would be required. A fire management program was established to improve habitat quality. In order to reverse the decline and expand the small gene pool, birds would need to be brought in from other populations.

The first of what would become six recruitment clusters, with four trees each supporting artificial cavities, would be created to receive translocated birds. During the fall of 2001, researchers from CCB traveled to Carolina Sandhills National Wildlife Refuge, caught two hatch-year females and one hatch-year male, and moved them to artificial cavities within Piney Grove. Over the next four years, CCB researchers moved an additional 22 birds into Piney Grove Preserve.

Intensive habitat management and the addition of new birds bent the curve and turned the population around. The initial management goal for Piney Grove was ten breeding groups. By 2017, the site supported 13 breeding groups including 56 adults.

By 2019, the site supported 16 breeding groups, including one group on the new Big Woods property, and is arguably bumping up against saturation. Breeding groups have become “top heavy” in recent years often holding eight to ten individuals through the winter. 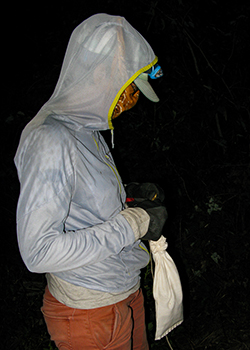 In 2015, the CCB began efforts to establish a second population of woodpeckers in Virginia within the Great Dismal Swamp National Wildlife Refuge. After extensive habitat management and the establishment of several recruitment clusters with artificial cavities, we moved the first birds from Carolina Sandhills National Wildlife Refuge in South Carolina and Palmetto Peartree Preserve in North Carolina. Birds have been moved from the Carolinas to Great Dismal each fall from 2015 through 2019.

The movement of these birds marks a milestone in the recovery of this species in Virginia and a sign that investment in aggressive management during the early 2000s has paid off.