Maria Donoghue Velleca, an accomplished scholar and award-winning educator who served as senior associate dean for faculty affairs and strategic planning at Georgetown University’s College of Arts & Sciences, has been selected as William & Mary’s dean of the Faculty of Arts & Sciences, President Katherine A. Rowe announced today. The president will recommend her appointment to the W&M Board of Visitors at the board’s April meeting.

“Professor Donoghue Velleca brings an impressive track record of thoughtful and creative leadership,” said Rowe. “I am very much looking forward to working with her to advance Virginia higher education.”

Donoghue Velleca, a specialist in brain development, will begin at William & Mary after Kate Conley steps down from the role of dean at the end of June. Conley, who served eight years, will return to the classroom in fall 2020 to teach French and Francophone studies.

“Maria Donogue Velleca’s impressive scientific accomplishments have undoubtedly prepared her well for her new role. “Yet the qualities that make her the perfect choice for William & Mary are her people-centered leadership style and personal warmth — a strong match for our institutional philosophy and values,” Provost Peggy Agouris said. “Professor Donogue Velleca brings evident joy to her partnerships with faculty and staff colleagues and to her work with students at all levels. She will build on the momentum in Arts & Sciences and record of success over the past eight years under Kate Conley’s leadership as dean.

“I am also grateful for the hard work of the search committee, led by Professor Lizabeth Allison,” added Agouris. “The committee assembled an inspiring field of candidates. In Professor Donoghue Velleca, we have someone who understands the value of liberal arts & sciences in the 21st century and who is deeply committed to our success in all aspects of our mission.”

The dean of the Faculty of Arts & Sciences leads the largest of William & Mary’s five schools. In that capacity, the dean oversees approximately 650 faculty — in 11 graduate programs and dozens of undergraduate majors and minors ­— as well as research centers and administrative offices that support the university’s teaching and research missions.

William & Mary’s undergraduate and graduate degree programs involve close collaboration with faculty and provide robust opportunities for interdisciplinary study. All Arts & Sciences faculty members pursue research to advance knowledge within their disciplines, in close collaboration with undergraduates as well as graduate students. The dean is a key partner to chairs and directors of programs in Arts & Sciences, deans of the schools of education, law, business and marine sciences, and the provost.

“As I have come to know William & Mary, I have been struck by how well this institution knows itself,” Donoghue Velleca said. “It is an honor to join a university with such a strong sense of community among its accomplished faculty, graduate and undergraduate students — and where staff, alumni and parents feel such deep allegiance.

“I am thrilled to have an opportunity to lead William & Mary’s Faculty of Arts & Sciences, with its vibrant mix of disciplines. When undergraduates, graduate students and faculty mix freely in a liberal arts setting, all of us reach new truths. The forward-looking vision of administrators and trustees is equally compelling. I am eager to begin collaborating with the president, provost, deans, faculty and staff -– and to join you all in strategic planning for the next decade.” 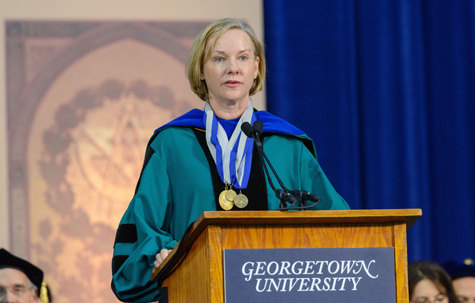 As a professor of biology at Georgetown, Donoghue Velleca directed a neuroscience research laboratory funded by numerous National Institutes of Health, National Science Foundation and an Howard Hughes Medical Institute university grants. Widely published in leading scientific journals, she has mentored dozens of undergraduate and Ph.D. students as well as post-doctoral fellows. She is the recipient of multiple awards within Georgetown College for excellence in undergraduate teaching as well as mentoring awards in each of the graduate programs in which she served.

As a member of the Georgetown College dean’s office, Donoghue Velleca oversaw faculty recruitment and retention, mentoring, evaluation and promotion for 26 departments and 11 interdisciplinary programs. With the college chief financial officer, she managed a $93 million operating budget and $60 million in endowments, strategically assigning resources for undergraduate and graduate programs with more than 500 faculty members and roughly 1,700 students. In that role, she worked in close partnership with offices across the institution, from the president, provost and counsel’s office, to the Office for Institutional Diversity, Equity and Affirmative Action. During her tenure, Donoghue Velleca helped to launch the Department of African American Studies and programs in creative writing and disability studies and supported the university’s working group on slavery, memory and reconciliation.

“Donoghue Velleca shares William & Mary's commitment to interdisciplinarity and to excellence in teaching and research at every level,” said Chancellor Professor of Biology Lizabeth Allison, who chaired the 13-member search committee. She added that Donoghue Velleca has a long track record of successful faculty recruitment and hiring, program-building and leading diversity and inclusion initiatives –- both within her institution and with K-12 and community college partners.

“The search committee was impressed by her commitment to transparent faculty governance, as an administrator and during her six years of service on Georgetown University’s Faculty Senate Steering Committee,” Allison said. “We are confident that she will be an extraordinary partner for our faculty and program chairs, provost and other senior leaders in all aspects of our Arts & Sciences mission.”

Holly Gruntner, a Ph.D. candidate in history who served on the search committee, emphasized Donoghue Velleca’s strong sense of connection with students.

“We were impressed by how curious she was to learn from students from across the institution –- about what students value about William & Mary, about the opportunities and challenges here,” said Gruntner. “Professor Donoghue Velleca places great emphasis on student success and well-being.”

Donoghue Velleca was recruited to Georgetown’s College of Arts & Sciences to co-direct a new undergraduate major in neurobiology. She collaborated to create the curriculum for and led that program from 2007 to 2015. From 2010 to 2015, she served as the director of the university’s Howard Hughes Medical Institute program, which focused on undergraduate research, as well as partnerships with Washington, D.C., public schools and a local community college.

“Maria has a sharp mind that identifies the way forward in complex contexts. She seeks only the best of herself, while inspiring the best in others,” observed Georgetown’s provost, Bob Groves, who worked closely with Donoghue Velleca. Reflecting on her leadership values, he added, “She appreciates the diverse ways of thinking that the disciplines exhibit and treasures the life of the mind that unites them all.”

Chris Celenza, professor of history and classics and dean of Georgetown College, said, “Maria Donoghue is a forward-looking thinker and a brilliant institutional citizen.” During her time as senior associate dean in the College of Arts & Sciences at Georgetown University, he credited her with playing key roles in every faculty hire and driving the college's strategic planning. “William & Mary is fortunate to have her leadership,” he said.

Donoghue Velleca earned her B.S. at Boston College and Ph.D. at Washington University in St. Louis. Before joining the faculty at Georgetown University, she served as assistant professor at Yale University School of Medicine. As a trustee of St. Albans School in Washington D.C., she fundraised for its $50 million campaign and served for two years as board chair. Donoghue Velleca and her husband have two grown children, one living in New York and the other a junior at Davidson College.