Immigration. Abortion. Guns. Name a third-rail conversation topic and chances are Xiaowen Xu is talking about it – and she knows you are, too.

Xu, an assistant professor of psychological sciences at William & Mary, researches political ideology. Her lab inside the Integrated Science Center is currently studying ways to foster constructive dialogue in an era of increasing political polarization.

“We’re running studies looking at hot-button issues,” Xu said. “If we want to have people from different parties, from different ends of the political spectrum, discuss these issues in a constructive way, we have to ask ‘what are ways to help improve that discourse?’” 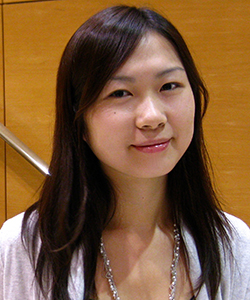 Xu’s research group, composed entirely of undergraduate students, is currently studying the effectiveness of political messaging tailored to personal characteristics. For example, the students may show a study participant a political message arguing for support for increased gun control, which is usually a stance endorsed by liberals, she explained.

However, the message could be written to emphasize how such policies will increase societal order and structure, which is generally valued by conservatives. She said the students will examine whether framing a “liberal” message to emphasize conservative values will make the message more palatable to conservative individuals, and vice versa.

“We're trying to see if we can reframe political messages to address a person's personality and see if that makes them more receptive to that message,” Xu said.

Garret Walker ‘19, who worked with Xu as an undergrad and currently serves as lab manager, says the study is ongoing, so the team is limited in what they can share about their methods. The data they collect will come from a series of surveys administered to participants online and in the lab. He hopes the results will shed some light on how to break down ideological barriers.

“This work feels especially relevant today, when everything is so divided and bipartisanship seems really difficult,” Walker said. “If we can reframe a political argument and it’s able to reach the other side, that may help heal that rift.”

The students have been central to the research process from the beginning, Xu explained. They helped design the study, established ethics protocols, are currently running the study and will be charged with making sense of the data they collect.

“I cannot give enough praise for William & Mary undergrads. They are just fantastic,” Xu said. “The students are involved from the inception to the end of this project.”

The goal in reframing political messages, she says, should not necessarily be to persuade that person to come to the other side, but rather to get them to understand the motivations behind the other side’s thinking. The first step is seeing someone as a full person, not an opponent, she explained.

“Unless you can understand the things that they value, the things that are central to who they are as people, it's going to be hard for them to listen to you -- and even harder be persuaded by you,” Xu said. “You might not see eye-to-eye, but you should be able to recognize their humanity.”

Xu describes her work as examining the psychological origins of political orientation. She studies how dispositional and individual differences work together to shape a person’s political ideology. Her most recent published research takes a look at the conservative end of the spectrum.

Last fall, she co-authored a paper on the influence of media consumption on political attitudes and voting preference. In the spring, she was the lead author on a paper examining the link between sensitivity to disgust and political conservatism.

In her study of disgust, Xu found that individuals who are more easily disgusted tend to be more politically conservative. Her data suggests that disgust-sensitive people tend to display a preference for physical order that extends into the sociopolitical environment, which could be one reason conservatives tend to value the strengthening of traditional norms, she explained.

“From an evolutionary perspective, disgust evolved to help us avoid things that could kill us,” Xu said. “There’s a reason we are repulsed by rotten meat, but there is a social component to disgust as well. The idea is there are those who use disgust as a way to reject people for certain social transgressions. They may not bring physical harm, but they are disrupting the societal order and that can be threatening.”

Xu’s findings illustrate the ways in which emotional, cognitive, and personality processes work together to influence political orientation. They show that political ideology is deeply nuanced and may have more to do with a person’s daily life than any given political stance. For example, she found that media preference can predict the types of conservative attitudes people endorse and, in turn, can even predict the candidate they endorse.

“Let’s say you hacked into my Netflix account and saw the types of shows I watch,” Xu said. “From that data, you should be able to see a general pattern and get a sense of what my political ideology might be. The media that people expose themselves to reveals a general ideology. Knowing that, you should have some predictive power for voting preference.”

Xu and her co-authors found that preferences for media genres that focus on action-based topics predicted stronger libertarian-independent attitudes, which generally emphasize self-reliance and decreased support for government-funded programs.

“The media products need only to contain general values and concepts that resonate with consumers’ political intuitions,” the researchers wrote.

Much of the team’s results are not surprising. For instance, those individuals with strong libertarian-independent attitudes tended to value traditional masculinity, freedom from government control and protection against foreign threats. When asked, they said they were less inclined to endorse Clinton or Sanders in the 2016 presidential election, but were more likely to endorse Trump, as he projected similar beliefs and attitudes.

While Xu’s research and analysis has revealed insights about past elections, she is clear she’s not in the business of forecasting results.

“What makes ideology such an interesting topic is that there are so many little factors that come into play. You never really know what could influence an election outcome,” Xu said. “I see it as this one piece of a giant puzzle. Even if I’m going to add just a tiny little bit to that puzzle, it’s still going to help me understand ideology better and why people endorse certain candidates or certain policies.”

For Walker, understanding the science behind political ideology is one step toward shaping a better society for the future.

“Ultimately, I find this work interesting because there's the promise of change,” he said. “If we can just change how we talk to each other, then maybe as a culture we can function more holistically. I realize that’s a far-fetched goal, but we do research in the hopes of improving ourselves and improving the societies that we create, and this work has the potential to do that.”