A new study based on careful analysis of 90 years of scientific catch data from the South Atlantic Ocean shows that the geographic distribution of Antarctic krill has contracted nearly 300 miles southward in concert with ocean warming, raising concerns for international fisheries managers.

Krill — free-swimming, shrimp-like crustaceans — play a central role in Antarctica’s marine food web, transferring energy and carbon from phytoplankton and zooplankton to fish, penguin, seals and whales. Changes in krill distribution are thus of considerable concern to both scientists and commercial fishery interests. 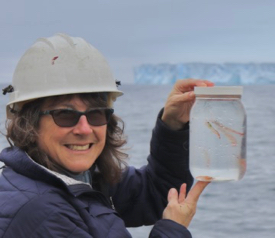 The study, in this week’s Nature Climate Change, was authored by an international team comprising scientists from the United Kingdom, Canada, Germany and the U.S. The lead authors are Angus Atkinson of the U.K.’s Plymouth Marine Laboratory and Simeon Hill of the British Antarctic Survey. The U.S. authors include Deborah Steinberg of William & Mary’s Virginia Institute of Marine Science, a member of the National Science Foundation’s Palmer Long-Term Ecological Research program. PAL-LTER examines the long-term effects of climate change on the ocean ecosystem west of the Antarctic Peninsula.

“We found that the geographic distribution of krill has contracted southward by about 440 kilometers since the 1920s,” says Atkinson. That contraction matches a pronounced warming in the team’s study area — a part of the Southern Ocean known as the Scotia Sea — where ocean surface temperatures have increased by 1.6 degrees Fahrenheit during winter and 3.6 F in summer between 1925 and 2006.

“The northern waters have warmed and conditions throughout the Scotia Sea have become more hostile, with stronger winds, warmer weather, and less ice,” says Hill. “This is bad news for young krill.”

“Antarctic krill are adapted to the cold,” adds Steinberg. “Due to global warming, the habitat they can survive in has shrunk and moved farther southward where waters are still chilly enough. Krill are central to the Southern Ocean food web as the main food source for whales, penguins and seals. This decrease in the northern part of their historical range will thus affect this sensitive polar ecosystem.” 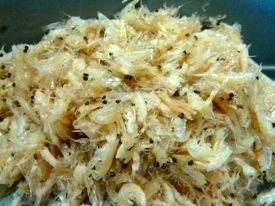 The team based their analysis on a unique dataset called KRILLBASE — itself the result of a multi-year, multinational effort by many of the same scientists. “This is a nice example of international cooperation in Antarctica,” says Atkinson. “It’s only when we put all our data together that we can look at the large scales of space and time to learn how populations of key polar species are responding to rapid climate change.”

The full dataset — compiled from old notebooks, the authors’ datasets, published reports and submissions by both researchers and commercial netters — comprises data from 10 nations and includes more than 1 million measurements of krill length.

A substantial part of KRILLBASE is the zooplankton data collected by Steinberg and colleagues as part of the PAL-LTER program.

“The Palmer Long-Term Ecological Research program is now in its 27th year, and combining its data with these other datasets allows for an even longer term and geographically broader analysis of climate impacts on this important species,” notes Steinberg, who is currently at sea on the program’s annual research cruise. 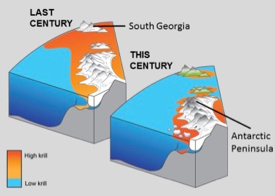 Whereas analysis of KRILLBASE shows a poleward contraction and decrease in the species’ geographic distribution, it also shows an attendant increase in mean body length. “Individuals in the current krill population average 6 millimeters longer than those in the 1970s,” says Atkinson. “That’s about a 75 percent increase in their mean body mass.”

This discovery contradicts the more common finding of reduced body size of species in response to warming, but the team’s findings support mechanisms to explain this — an increasingly unfavorable climate leading to much fewer young krill replenishing the population, coupled to increasing survival rates. This has led to a smaller population dominated by older and larger krill.

“Our analysis reveals a species facing increasing difficulty in replenishing itself and maintaining high numbers at the northern edge of the Southern Ocean,” says Hill. “These changes appear to be driven by the global climate. Continued precautionary management of the krill fishery is important but is no substitute for global action on climate change.”

One feature of global climate that appears to have an outsize impact on krill populations is the Southern Annular Mode, or SAM, a periodic north–south shift in the westerly wind belt that circles Antarctica. During positive SAM events, the wind belt contracts towards Antarctica, bringing warmer temperatures and reduced sea ice, conditions unfavorable to the survival of young krill.

“The sharp decline in survival of young krill over the last 40 years coincides with a trend towards increasingly positive SAM anomalies,” says Steinberg.

Because climate models project a continued increase in positive SAM anomalies over the next 50 years, the researchers warn of the potential for further contraction in krill distribution in the decades ahead due to continued warming and sea-ice loss.