Kenny, a biology master’s student at William & Mary, has spent the past two years studying the parenting behavior of bluebirds. Specifically, she is working to understand how human-made noise influences nesting and productivity.

She does this by maintaining experimental speakers, which play traffic noise on loop next to bluebird nest boxes. The goal is to see if birds are less likely to nest near the noisy boxes – and to see what behavioral traits are common in the birds who do decide to nest there. 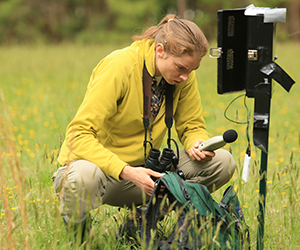 “A previous study in our lab found a correlation that birds nesting in noisier areas raise fewer babies than the ones in the quiet areas,” she said. “My study is following up on that and doing an experimental manipulation of noise to see if it’s actually noise that is causing this difference in reproduction and if so, why?”

“We found from last year’s data that they were not really responding to noise directly,” Kenny said. “So, this year, I set up the speakers before they started building their nests to see if it influences where they decide to nest. I’m also examining the timing of their nesting and egg laying, as well as keeping track of how many eggs they lay and how many chicks fledge.”

“That’s one thing that has been especially fun this year,” she said. “I am able to see what’s going on in their relationships, if the returning birds from last year are in the same pairs or have found other mates.”

For instance, one of the female bluebirds she observed last year is raising chicks on her own this year.

“I don’t want to gossip,” she said. “But there’s been a new guy hanging around the nest.” 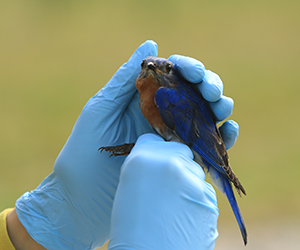 On a recent Tuesday morning, Kenny set out to catch and band the pair of bluebirds living in nest box 26 at York River State Park. It’s a process she has finetuned over the years, but there is still a great bit of excitement, especially when it comes to catching the males.

“The females are pretty easy to catch, because they sit on the eggs,” she said. “Males don’t help incubate, so I have to catch them with nets.”

The matriarch of nest box 26 was quietly incubating five blue-tinted eggs when Kenny arrived. She reached in and gently removed the bird from the nest, placing a bag over the bird’s head to keep her calm. Then she took measurements and banded the bird with an identification tag from the USGS Bird Banding Laboratory. After letting mom go, she got to work catching dad.

Kenny unfurled two giant nets, suspended between three metal rods in a v-formation, which she hammered into the ground next to the nest box using a rubber mallet. Then she called on the help of Decoy Dan, a homemade bluebird decoy she built with material from a craft supply store. Decoy Dan looks surprisingly realistic, considering he’s a piece of Styrofoam covered with an array of blue-tinted feathers. 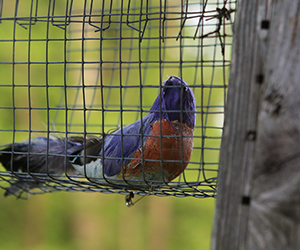 “Hopefully the male will get territorial and come and attack, because he thinks there is an intruder,” Kenny said, watching the male bluebird stare down at his nest from a nearby branch. She placed the decoy next to the nest box and played a recording of the bluebird song through a small speaker.

In less than two minutes, the male bird took a divebomb at Decoy Dan, catching the net on his way down. Kenny was ready and skillfully removed the bluebird from the net and placed a bag over his head. She readied her measurement station and got to work collecting data.

Kenny weighed the bird while he was still in the bag and recorded the figure: 31.5 grams. Then she examined the pattern of blue and white on the wing feathers to determine the bird’s age.

“We can’t tell the precise age, but we can tell a first-time breeder, which is a second-year bird, or we can tell older than second year,” Kenny said.

In this case, Kenny determined the mom was a second-year bird, meaning this was her first clutch of eggs as a rookie parent, but the dad was older, meaning this likely wasn’t his first time breeding. Next, Kenny examined and recorded the bird’s overall size and body condition.

“You can know if they are heavy or light for their size by looking at the ratio between wing length, leg length and weight,” Kenny said. “It seems like size might also influence behavior, based on my data from last year.”

A key behavioral metric Kenny charts is a bird’s willingness to approach a novel object – specifically, a stapler belonging to her advisor, Chancellor Professor of Biology Dan Cristol. She places the stapler on top of the nest box and observes the birds’ response.

Her research indicates larger bluebirds approach novel objects a little bit quicker, on average, than smaller birds. She uses that behavioral data in her statistical models to help her determine if noise really does influence behavior. 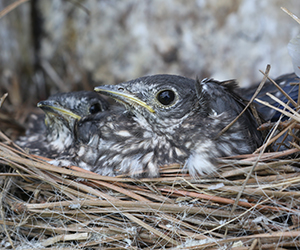 “I’m interested to find out if birds that are particularly risk averse are more impacted by noise than other birds in the population,” she said. “So, I’m measuring neophobia, which is how they respond to a novel object. I’m also measuring aggression, so I can see if the birds that settle in noisy boxes share particular characteristics.”

“When I look at the difference in egg-laying date between these pairs, the difference is even larger with birds at noise boxes laying an average of 11 days later than the ones in control boxes,” she said.

The difference in egg-laying date could be related to population health, Kenny explained, because across many songbirds species, individuals that begin breeding earlier in the season have more time overall to raise their chicks and tend to have higher reproductive output. But, she added, the results are just preliminary and further analyses are needed to determine whether the differences in egg-laying are statistically significant.

“It's really important to continue to push forward with our education and research agenda in a safe way -- and Heather has done just that,” Cristol said. “This is a very opportune time to be examining the effects of noise pollution on birds, as the entire pandemic world has just noticed the birds singing in their neighborhoods in the absence of traffic.”

After the chicks hatch, Kenny turns off the volume on the speaker, but not the volume on her research. She continues to observe the birds. She monitors how well the parents feed their chicks. She also sees how well they protect their home, using a taxidermized tree swallow, which she places near the nest.

“Tree swallows are also cavity nesters, so they will use the nest boxes and compete with the bluebirds,” she said. “I record whether the bluebirds try and attack the tree swallow or just ignore it. Some birds are really protective, they will strike it and knock it off the nest box.”

Aggression is not a trait that the average person would ascribe to a bluebird, Kenny says, but it’s a behavioral characteristic that is much more common than we think.

“It’s funny because bluebirds have a reputation in popular culture of being sweet and gentle and happy all the time,” Kenny said. “But there is plenty of drama going on.”