Plastic ingestion by aquatic life is well documented. Less well known is the damage plastic does to the immune systems of fish.

“There's very little research done on that,” Patty Zwollo said. “A lot of studies have focused on the larger pieces of plastics. I think the field is still trying to figure out where the microplastics are in different animals, including fish.”

Zwollo is an immunologist, a professor in William & Mary’s Department of Biology. Immunologists study the body’s mechanism that provides resistance to disease. Her lab has discovered that just as whales swallow plastic thinking it’s food, some cellular components of the immune system in fish “swallow” bits of microplastic that they mistake for invading pathogens.

Zwollo compares the immune system to an army: It’s a complex organization that has evolved to protect the body from invaders. 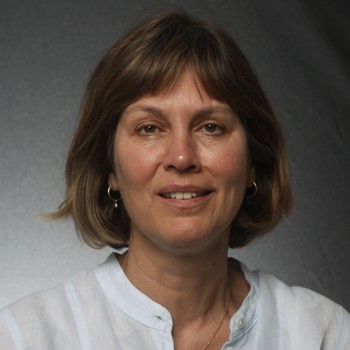 “First, an army needs to be trained to recognize the enemy,” she explained. “And then when it's trained to do that, it has all kinds of different ways of fighting the enemy.”

“When B cells recognize a pathogen or a toxin or whatever, they will bind to the invader,” Zwollo said. “They’ll start to make antibodies and then remove the pathogen from your body.”

Once bits of plastic get small enough — the size of a bacterium — they can be mistaken for bacteria or viruses and ingested by certain cells in the immune system army. An immune cell’s act of ingesting a foreign body is known as phagocytosis. Those cells are called phagocytes.

“And once the plastic gets inside of the cell, they can’t be digested because they’re not organic. They’re plastic, so the plastic stays inside the cell,” Zwollo explained.

She says that lab studies have shown that if an immune cell absorbs a great deal of microplastic, the cell will die pretty quickly. “But that’s probably not biologically relevant,” she added, explaining that in the natural environment, the levels of microplastic are almost certainly much lower than what the cells were getting in the lab.

“So now that my students are feeding cells very small amounts of those microplastics, really low levels,” she said. “And then we see that they do survive longer, but they still die. So probably that is more realistic in comparison with what happens in the oceans.”

When it comes to B cells, things get a little more complicated. B cells in mammals differ in a number of ways from B cells in fish, Zwollo explained. It’s one of the many complexities in the study of the immune system. For one thing, mammals produce B cells in their bone marrow.

“Fish don’t have bone marrow,” she said. “So all their immune cells are made in this weird organ, the anterior kidney. The kidney of fish is very different from our kidney.”

More to the point, mammalian B cells are not phagocytic — they do their antibody work without engulfing the invading pathogen (or errant microsliver of plastic). Our B cells bind to the invader, then start producing antibodies.

“But in fish, B cells can also be phagocytic,” she said. “So that, to me, is the most interesting thing about it. It doesn’t seem to just affect phagocytes.”

Zwollo stressed that her lab’s results are preliminary. She recently received funding from the National Oceanic and Atmospheric Administration to continue her studies on the effect microplastics are having on the immune systems of trout and salmon, commercially important fish.

After Zwollo’s lab completes its work, the second aspect will be conducted at William & Mary’s Virginia Institute of Marine Science, where researchers will expose whole fish to microplastics.

“I’ll be involved in that part too,” she said. “But most of my contribution will be in the first aspect.”

She said she expects her investigations to take another year. Much of the work in the Zwollo lab is done by students. She has a graduate student, Fatima Quddos, working on the project. She also has an undergraduate, Lauren Abderhalden ’22 involved.

“Lauren is culturing cells,” Zwollo said. “I’ve given her a lot of freedom, so she can learn the effect of little tiny plastic beads versus beads that are a little larger. What is the effect of concentration? And time, she is looking at how long you have to leave those cells with the microplastics.

Zwollo is teaching two sections of Immunology Laboratory this semester with eight students in each section. She’s launched her lab students loose on a journey of discovery.

“I basically told them, all right, you get to decide what sizes of beads you want to work with,” she said.

The lab students set their own course, deciding on all the conditions for their own experiments. Then, of course, they will analyze the data.

“The students are really engaged,” Zwollo said. “I’m interested in anything that comes out, pretty much. Because we really don’t know much about this situation.”