The Center for Conservation Biology has compiled 2019 survey results for bald eagles nesting along the James River.

CCB Director Bryan D. Watts reports that the breeding population has increased to 302 pairs, making the James the most significant tributary for eagles throughout the Commonwealth.

“This new milestone is particularly gratifying since the James is the only major tributary of the Chesapeake Bay where the species completely disappeared as a breeder during the 1970s,” Watts said. 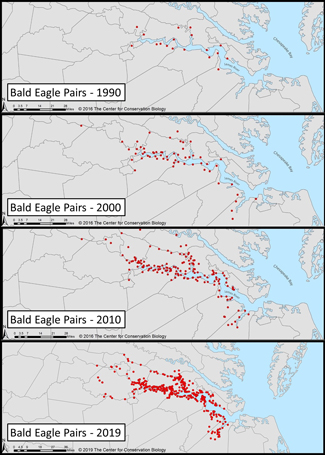 Watts added that the 300-pair mark represents a symbolic milestone: In 1990, the United States Fish and Wildlife Service Bald Eagle Recovery Team established 300 pairs as the recovery goal for the entire Chesapeake Bay.

“For the James River alone to have surpassed this goal is a remarkable achievement,” Watts said. “The James now supports one of the densest breeding populations found anywhere throughout the species range.”

Based on subsampling, the population for the tidal reach of the broader Chesapeake Bay is now estimated above 3,000 breeding pairs — ten times the initial recovery goal and the largest in eastern North America.

The CCB has been conducting annual census surveys of the bald eagle population since 1977. The Center for Conservation Biology is a joint program of William & Mary and Virginia Commonwealth University.