It’s a new era for bald eagles in the Chesapeake Bay drainage — and the end of an era for a veteran team of eagle researchers.

The A-Team has signed off after 30 years of flying at treetop level along the Bay and its tributaries, counting nesting eagles and their chicks. The three-man team based at William & Mary’s Center for Conservation Biology completed its last flight on April 17, counting chicks in nests up the Chickahominy River. They’ve documented an astounding comeback in the regional population of the national bird from virtually zero to today’s point of saturation.

“You know, it has been a really good team since the very beginning, mostly because the three of us have always believed similarly in the mission,” said Bryan Watts.

Watts is the director of the CCB and has been the A-Team leader for the past 20 years. The senior member of the team is Mitchell Byrd, Chancellor Professor of Biology, Emeritus. Their pilot invariably introduces himself as Captain Fuzzzo. “Spelled with three ‘z’s,’” he adds. “The middle ‘z’ is silent.”

Byrd is 92 and has been studying eagles since the 1960s and began the census flights in 1977. Watts, Byrd and Fuzzzo became a team in 1991. Each spring they would conduct two sets of flights to get a handle on the regional bald eagle population. The first set of flights aims to count and log nesting eagles, usually beginning with the James River, home to the earliest nesters. The second set is a productivity flight, counting chicks in their nests.

“There is a lot of land to cover out there,” Watts said. “But there is an economic threshold for eagles; they can’t live more than five miles from a source of fish. So they are bounded ecologically to a narrow corridor around water.”

Early on, the A-Team developed a methodology perfectly suited to the efficient and accurate recording of nesting eagle activity. Fuzzzo flies the plane just above treetop level. Watts sits in the back, spotting, calling out the numbers to Byrd in the co-pilot seat who logs the data.

The bald eagle was placed on the federal Endangered Species list in 1973, about the same time that the toxic pesticide DDT was banned. When Byrd began the census flights four years later, there were 33 pairs nesting across all of coastal Virginia, and none on the James River.

This year’s census found more than 340 pairs on the James alone, Watts said. The eagle population expansion has resulted in the researchers reporting behavior they’d never expected to see.

Byrd said that in his early days, bald eagles were notoriously people-shy. For example, he said human activity would often cause eagles to fly off and even abandon their nests.

“Back in the 60s, we had an eagle nest on a big pine tree on Jamestown Island,” Byrd said. “They had a nearby pine that died from bark beetle and they came in and cut it down. Those birds immediately abandoned the nest.”

Over the years, eagles have come to tolerate human contact, which is a benefit to eagle researchers, who sometimes need to get up close and personal with bald eagles. Byrd said that CCB personnel can now band eagle chicks by climbing the nest tree and extracting the chick.

“It’s not something you can do in five minutes,” he said. “And the whole time, the adult is circling around overhead, giving that whimpering little call they have. Then, as soon as you leave, they’re right back on the nest.

“That wouldn’t happen 50 years ago,” Byrd said. “Fifty years ago, they probably would abandon the nest.”

Byrd added that another raptor he has studied, the peregrine falcon, doesn’t go in for the whimpering-and-circling stuff when a researcher is working a nest.

“With a peregrine, his primary goal is to take your head off,” he said.

Byrd and Watts share latter-day anecdotes of eagles nesting in places where they believed no eagle would dare. Byrd notes that a big loblolly near water is still a prime nest spot for bald eagles, but the birds nowadays are making do with nests on cell towers, electrical transmission towers and osprey platforms. He said on the Eastern Shore, eagles are even nesting right on the beach, and added that one pair has nested just above the surf line. 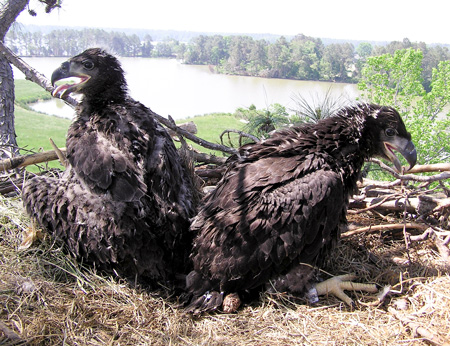 And in defiance of their predictions, the eagles also are moving into residential neighborhoods.

“Back when Mitchell started, you’d never guess that eagles would become yardbirds,” Watts said. He said the CCB did a study in the early 1990s that modeled eagle distribution in Virginia showed what they believed was the status quo.

“Basically, you had people and you had eagles, with no overlap in the habitat,” Watts explained. “That’s why we were so concerned about development, with all the shoreline areas being built up.”

Byrd said they first began to see the phenomenon when they noticed that bald eagles were nesting closer and closer to other pairs — unexpected behavior in birds believed to be highly territorial.

“And that was leading up to the present time, with eagles actually nesting in people’s yards,” he said. “We had one nest up on the Potomac where the landowner was very unhappy because the eagle nest was right over his house and they kept dropping fish on his roof.”

The population of eagles in the region has climbed steadily since the early 1970s and Watts talks about how easy it has become to see a bald eagle on the Peninsula — if you know what to look for.

“Just about anywhere in Williamsburg, you can see eagles every day,” he said. “You can hear them calling. You just need to be aware of them overhead.”

(A tip for Williamsburg eagle seekers: Check out the sky above Eastern State Hospital. Watts said there are no nests nearby, but he sees bald eagles there frequently.)

The steady rise in eagle population was paced by an increase in productivity, or the number of chicks raised. Then, around 2000, productivity began to fall — and it kept falling.

Watts said that’s when the CCB began investigating the ecological mechanism that regulates eagle population. Research at the center, including work by graduate student Courtney Turrin, took a deep dive into what might be called eagle sociology.

“We have these boom periods in the late 90s and early 2000s, when just huge amounts of young were produced. And they reach a point where there's no more space available for them,” he explained. “This creates a class of birds that are of breeding age, but they don't have territory — they’re what we refer to as ‘floaters.’”

Some floaters seek out new territory inland, but Watts said enough floaters stay around to outnumber the breeding population six to eight times over. Floater behavior cuts into the productivity of the breeding eagles in two ways, he said.

“The first is that you get fights for territory,” Watts explained. “That’s been going on now for a few years.”

Territorial scrapping and other eagle-on-eagle violence has led to an increase in injured birds being taken to wildlife rehabilitation centers: “It’s puncture wounds and those types of combat injuries,” he said. “And we see mortality; the birds are picked up, bloody; they’ve been killed.”

This year, a bird nesting at Virginia Beach under close observation was killed in combat. “And there were four birds to take his place,” Watts said. “They fight it out and the winner gets the nest.”

Watts said the second way that floaters depress productivity is how they upset the domestic life of the nesters. His census database logs the presence of eagle parents in relation to the nest. He said in the 1990s pre-floater era, the female was typically on the nest, while the male was usually not seen, as he was out catching fish. 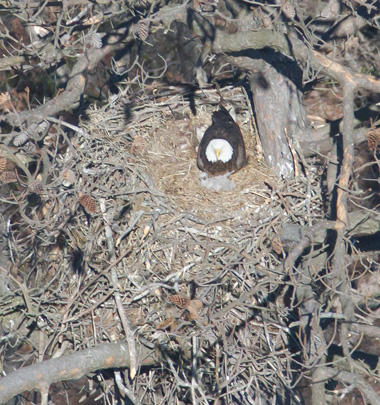 “Now, the male is almost always there,” Watts said. “He’s forced to guard against these floater intruders, playing a trade-off with his responsibilities to get food for the nest. He’s being squeezed.”

The resulting decline in productivity plays out in a couple of ways. For one thing, Watts said they’re seeing more and more failures: nests that don’t produce any fledged offspring. And the brood size is running smaller.

“In the late 1990s, the Chesapeake Bay would have three-chick brood rates that would go up 15 to 20 percent,” he said. “That was unheard of throughout the entire range of the species. Now that’s much reduced.”

And Watts said the reason for the reduction of the brood rate is because the male eagles are squeezed.

“He’s having to stay home, rather than going out to make a living,” he explained. “That has really impacted productivity. We never expected this to happen, and we’ve tracked productivity since the late 1970s.”

Watts said the recent work of the A-Team amounts to the first pages of the final chapter of the recovery of the Chesapeake bald eagles. It’s a big anniversary year, the 60th year of the aerial survey as well as the 30th year for the Watts-Byrd-Fuzzzo lineup.

Byrd saw the eagle population grow from that 33-pair baseline to around 1,500 pairs, more than 20 times the original recovery goals established when the flights began.

“As a biologist, you don’t expect to see that arc of recovery,” Watts said. “Mitchell has been able to witness all of that. I came on later.”

Watts got involved with the flights as a graduate student — he received his master’s from William & Mary in 1986. Over the decades, the eagle project has gone through a number of phases.

“It started with the conservation focus: What is the population doing? Where are the nests? How can we get the eagles to thrive now that they’re federally protected?” he said.

Bald eagles were removed from the Endangered Species List in 2007, but still are protected by an array of laws. Likewise, the CCB’s focus has evolved from conservation to ecology. Just as the eagle researchers have witnessed behavior they’d never thought they’d see — eagles nesting in neighborhoods and on beaches — they’ve found themselves taking positions on eagle policy that were unthinkable 30 years ago.

Watts and Byrd had a recent encounter with a couple who wanted to build a home up on the Potomac. The couple bought the land when they were younger, intending to build a retirement place.

“They wanted to build their dream house on this property, and a pair of eagles moves in,” Watts said. “And it was an unpleasant thing to sit there and talk to them about eagles and the lady is crying, because they still want to build the house, but they’re restricted from doing that.”

Watts said it’s time to review the protections on the birds: The recovery of the bald eagles has been spectacular, and the eagles have demonstrated willingness to nest near humans.

“I think these protections need to be rolled back. There needs to be a balance,” Watts said. “And, no, I didn’t think I would ever be saying that.”