The Faroe Islands, an archipelago between Norway and Iceland, were once believed to have been settled by Viking explorers in the mid-9th century CE. Thanks to new analysis of ancient sheep DNA, the remote, North Atlantic islands are now shown to have been inhabited by British Isle shepherds centuries before the Vikings arrived.

“Until recently, the prevailing theory was that the Faroe Islands were first settled by Vikings on their westward migrations across the North Atlantic to the British Isles, and then on to Iceland and Greenland,” said Nick Balascio, associate professor of geology at William & Mary, who was part of a team of scientists studying biogeochemical markers left in lake sediment to chart environmental changes and reconstruct human activity patterns on the islands. “Using sedimentary DNA and molecular biomarkers, we were able to establish more firmly when the presence of humans first started on the islands – and it was at least 300 years earlier than previously thought.” 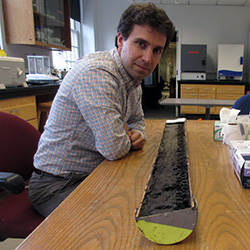 Balascio is a co-author on a study recently published in Nature: Communications Earth & Environment that used a combination of sedimentary DNA and biomarkers produced in the digestive tract of sheep, fecal biomarkers, to show conclusive evidence that humans had introduced livestock to the Faroe Islands three to four centuries before the Viking-age Norse settlement period documented in the existing archaeological record.

He explained that the islands represent an important “stepping stone” in the westward migration of Scandinavian and Hiberno-Norse peoples into Iceland, Greenland and beyond. The timing of the settlement has larger significance for understanding the history of human exploration and colonization, he added.

“We knew that when people first showed up on the islands, because it had been uninhabited, we should be able to see the impacts of the changes they were making to their environment, specifically through the introduction of grazing animals,” Balascio said.

By analyzing hundreds of years of layers of soil deposited on island lakes, Balascio and his co-authors were able to find traces of ancient DNA or and other molecular evidence that they demonstrate “unequivocally identifies the signature of human presence on the Faroe Islands.”

“In the broad sense, we were looking for signatures in these lake sediments that showed people being on the landscape,” Balascio said. “But in a practical sense, that’s actually hard to do. We can't necessarily see human DNA, because there weren’t high enough concentrations of people living within a watershed that would flow into a lake. What we did find was a large amount of sheep DNA within a catchment of a lake.” 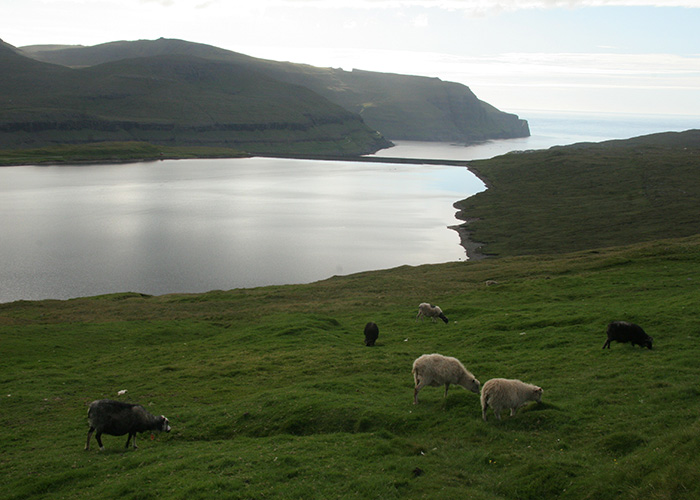 Balascio and his co-authors first had the idea to analyze Faroe Island lake sediment after a 2013 paper announced the discovery of charred barley grains in an archaeological site on the island of Sandoy that were found to predate Viking settlement.

“It just seemed like a question that we could really tackle with our expertise,” said Balascio. “We came in thinking that we could use lake sediments, which are continuously accumulating material through this interval of time, to try to date when people showed up.”

The team of scientists from the William & Mary, the University of Massachusetts and Columbia University specialize in paleoclimatology, using new molecular techniques to reconstruct the past history of environmental changes. For this study, the team also collaborated with DNA specialists at the University of California Santa Cruz’s Paleogenomics Laboratory.

Funding for the project was provided by a collaborative grant from the U.S. National Science Foundation’s Division of Behavioral and Cognitive Sciences to William & Mary, the University of Massachusetts Amherst and Columbia University.

“Over the last handful of years, we have started to understand more and more the impacts humans have on landscapes early in the establishment of agricultural settlements that eventually grow into larger civilizations,” Balascio said. “We realized that we have these tools that reconstruct past environments and we could use them to answer more anthropological questions about where people were and how they were living in certain environments throughout time.”

In this case, the team analyzed molecular remains to determine that there were shepherds,  likely from the British Isles, grazing their livestock on the Faroe Islands beginning at 500 A.D., before the Vikings even had the sea-faring technology to make the voyage to the islands. They also used lake sediments to provide a detailed history of the vegetation changes that followed as a consequence of human arrival and land use.

Before the sediment can be studied in the lab, a field crew is responsible for coring the lakes, taking long tubes of sediment from the lake floor. The core tubes are lowered over the sides of inflatable rafts with ropes, filled with sediment and hoisted back up from the depths.

Back in the lab at William & Mary, Balascio and his students analyzed the samples to try to piece together a historical record where one didn’t exist, dating deposits in the sediment using radiocarbon and volcanic ash from Icelandic eruptions.

“With this kind of work, one of the most important things is the chronology – how well we know time – and Icelandic volcanic eruptions can be used to actually date the sediment,” Balascio explained. One of his undergraduate students, Genevieve Pugsley ’18, was a key member of the research team developing the volcanic ash timeline and was a co-author on a previous publication based on the lake sediment record.

“One of the main hindrances in attributing earlier settlements on remote islands like these is the lack of a physical, archaeological record,” Balascio said. “With that kind of evidence limited, we have to get really creative and develop new interpretations and methods to understand and constrain time.”