"Nothing but a tick."

"What'll you take for him?"

—Tom and Huck, in Tom Sawyer

Ticks were evidently so rare in Samuel Clemens’ Hannibal that a single live specimen had value enough to tempt Tom Sawyer to part with his newly shed tooth. Matthias Leu says it was the same in the Switzerland of his more recent youth.

“When I was a boy, I spent all my time in the forest,” Leu said. “I never saw one tick. And in Switzerland now, you should not leave the trails because there are so many ticks. So, it's not just in North America; it's global.” 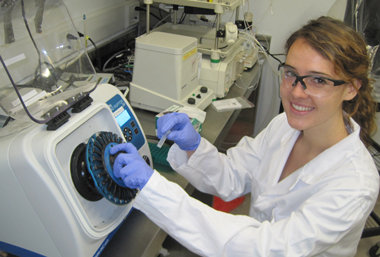 Leu and his colleague Oliver Kerscher are associate professors in the Department of Biology at William & Mary. They are among the co-authors on a new paper in the journal Landscape Ecology. The other authors are Brent Kaup, associate professor in the university’s Department of Sociology; Dylan T. Simpson, a former graduate student now in a Ph.D. program at Rutgers University; and two former undergraduate students, Molly Teague, ’15 and Joanna Weeks ’13.

Their paper in the journal Landscape Ecology is titled “Habitat amount, quality, and fragmentation associated with prevalence of the tick-borne pathogen Ehrlichia chaffeensis and occupancy dynamics of its vector, Amblyomma americanum.” It looks at the relationship among deer, a single species of tick and a single tick-borne disease.

The tick, Amblyomma americanum, is commonly known as the lone star tick and the disease it carries is ehrlichiosis. Leu said little is known about the ecology of the Ehrlichia chaffeensis bacterium. Most of the research that has been conducted focuses on the black-legged tick, the vector of Lyme disease. Lyme is better known than ehrlichiosis, and they have similar symptoms, but Leu says it may or may not be more common.

“A decade or so back, the medical world was not in tune with these tick-borne diseases,” he said. “There probably has been a lot of ehrlichiosis that was misdiagnosed as Lyme.”

Diagnosis is a clinical question, though, and Leu and his colleagues are more interested in similarities and differences of the ecological relationships that drive Ehrlichia chaffeensis and those of the more-studied Lyme pathogen. It starts with habitat.

“Fragmentation occurs when a contiguous patch of forest is subdivided into smaller patches” he explained. Fragmentation can occur naturally, through forest fires or other disturbances, but most forest fragmentation today is done by humans. Some of the patches are cleared for farmland, or low-density housing. Other patches remain forested.

“And with fragmentation we increase the length of the edge,” Leu continued. “What once was a contiguous forest with an edge along the boundary, but now by subdividing that large patch of forest into smaller forest patches and mixing that area up with farmlands you now are creating lots of edges.” 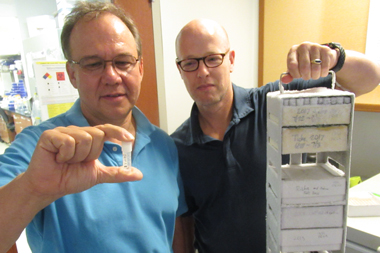 He went on to explain that in ecological terms, the “edge” of a forest extends 250 to 300 yards in, at which point the habitat is known as the forest core or interior. Leu said researchers have found that microclimates often develop in forest interiors. And as originally vast forests become increasingly fragmented, there are many areas that have a great deal of forest, but those wooded areas are in patches, each less than 250 across. “So, it’s all edge,” Leu said.

And forest edges are prime deer habitat, he explained. “Deer love edges,” he continued. “If you think about it, there is more light, which means there is less competition among plants for sunlight and so the total plant biomass increases.”

Plus, there is a handy forest to jump into when a predator shows up. “It’s a combination of feeling safe and having food available,” Leu said.

Habitat that is attractive to deer makes for easy living for ticks. The lone star tick’s life cycle goes like this: Hatch out of the forest leaf litter as a larva. Find something to feed on. Have a blood meal for a few days. Drop off into some vegetation and start molting, emerging from your larval skin as a nymph. Find another something to feed on. Feed for a few weeks. Drop off and have a little rest. Molt into an adult, find another host, feed until full, drop off and make more ticks.

That something to feed on is usually a whitetail deer, although Leu says rabbits and raccoons are possible tick targets. But deer, Leu said, are, in ecological terms, “competent hosts,” serving not only as a meal for the tick, but also a reservoir for ehrlichiosis, capable of infecting the next feasting tick with Ehrlichia chaffeensis. He added that they believe that fawns and yearling deer are especially important in transmission of the bacterium.

“The older deer have antibodies,” Leu explained. “So they were infected at one point, but they no longer have the bacterium in their bloodstream.”

If whitetail deer are on the competent end of the tick-hosting spectrum, the other end is anchored by the possum, Leu said.

“They actually are kind of a dead end for ticks,” he said. “First of all, possums are very clean. They actually groom themselves so well that they have hardly any ticks on them. And secondly, they’re not a competent host. If they get infected, they can shed the bacteria.”

The William & Mary researchers monitored 16 study sites comprising a total of 130 plots in southeastern Virginia over a five-year period. Tick selection is done in the hot, humid summer. It’s tedious, it’s boring and, well, there are ticks. Leu says it’s sometimes hard to find a student willing to do it. But at least it’s easy to collect ticks.

“We drag a meter-square cloth across the forest floor,” Leu said. “And every three meters we pick the ticks off of the cloth.”

The picking off isn’t so easy. The researchers use tweezers and resort to pulling the larvae and nymphs off the cloth with duct tape.

The ticks go into a 75 percent ethanol solution. “We ‘pickle’ the ticks,” Kerscher likes to say.

Kerscher and his team take the pickled ticks to the lab. The ticks are “disrupted,” he says. They go into an instrument called a bead ruptor that shakes the ticks with tiny glass beads, cracking open the tough tickly exoskeleton. The cracked ticks are placed in a denaturant that gets rid of the proteins and the RNA.

“The goal,” Kerscher said, “is to get out the tick DNA. We want to make sure we have the type of tick in the vial that we think we have. You can tell the adults, but when you have the small nymph, it’s very hard to tell the species.”

DNA analysis showed that around 90 percent of the ticks harvested for the program were members of the target species, the lone star tick. Leu said that such figures don’t necessarily indicate an absence of other tick species in the collection areas. He suggested that there might be a physiological effect at work.

“The black legged ticks, they really don’t like hot weather,” he said. “In the heat of summer, when we’re collecting, they’re going under. The lone star tick doesn’t like cold weather, so they come out later.”

They ran additional tests to identify the DNA of the Ehrlichia chaffeensis bacterium and the lab team found it in .8 to 2.9 percent of the ticks sampled across all sites. But Leu points out that the prevalence of the bacterium varied greatly over the years, one year going up to 3.7 percent, then dropping down again.

The paper comes to some conclusions. For instance, deciduous forests are better incubators of Ehrlichia chaffeensis than coniferous ones.

“This means that forests managed for timber may be relatively safe, but areas like suburban parks may have a higher risk of disease,” the paper notes.

The research also raises some questions, such as the mysterious “turnover” or annual variance of the bacterium. The team is seeking funding to continue the studies. There are a number of new questions posed by work described in the paper. Kerscher says sequencing has shown evidence of endosymbionts and other related organisms living in the ticks.

“There is a lot of things going on inside these ticks,” he said. “And, remember, we were only looking for one single bacterium.”

Another question to be addressed is turnover, or the mysterious way Ehrlichia chaffeensis has of disappearing from a study site, only to pop up the next year.

“In two of the sixteen study sites, we never found the bacterium,” Leu said. “Those sites were out in the New Kent area where there is a lot of deer hunting. And you know, it’s a rare occasion to see deer out there. If you’re just looking for droppings, they’re hard to find, because there are very few deer out there.”