A consortium of 14 shellfish geneticists from 12 East Coast universities and government agencies has won a five-year, $4.4 million grant funded by NOAA Fisheries through the Atlantic States Marine Fisheries Commission to develop new tools to accelerate and localize selective breeding in support of oyster aquaculture.

The project team was assembled by Stan Allen, professor and director of the Aquaculture Genetics and Breeding Technology Center at William & Mary’s Virginia Institute of Marine Science; Ximing Guo, distinguished professor and shellfish geneticist at Rutgers Haskin Shellfish Research Laboratory; and Dina Proestou, a scientist with the USDA’s Agricultural Research Service. Guo will serve as the consortium’s principal investigator. 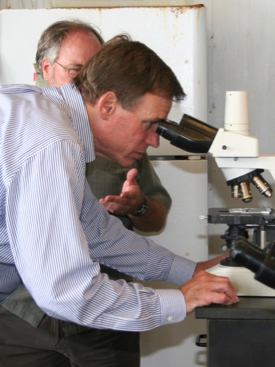 Allen says, “Our respective breeding programs at Rutgers and VIMS are at the core of the new consortium approach. The project is a terrific opportunity to develop further ground-breaking approaches with Ximing’s team and our other East Coast collaborators, and will hopefully deliver all the more results for industry.”

Guo and Allen previously partnered to create the world’s first tetraploid oysters at Rutgers in 1994.

From measurements to markers 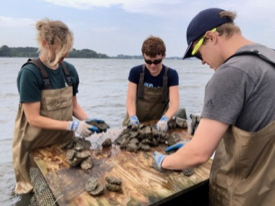 During the past two decades, researchers in Allen and Guo’s labs have used traditional methods of artificial selection to develop varieties of the eastern oyster Crassostrea virginica that are now quite tolerant of MSX, the parasite that devastated the oyster harvest in the mid-Atlantic beginning in the late 1950s. These selective breeding programs have also substantially improved other traits, leading to faster growth and meatier oysters.

The sequencing of the oyster genome in 2012 unlocked a flood tide of new possibilities.

“Now that the oyster genome has been sequenced,” says Allen, “there’s a lot of raw material to work with. We want to take that from sequence to consequence, and use that information in a modern way in our oyster breeding effort.”

The consortium partners plan to advance the pace of genetic improvement by identifying the specific genes responsible for desirable traits. They will then strive to develop and share domesticated lines whose traits are customized to local conditions. With a native range from Atlantic Canada through the Gulf of Mexico, eastern oysters are exposed to significantly different conditions among regions. 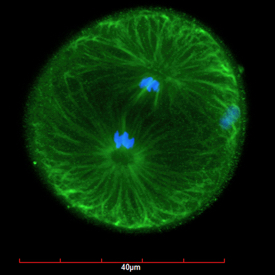 Allen says there are a number of different genetic approaches that could yield improvements more quickly than those provided by traditional breeding methods.

“Geneticists and bioinformatics researchers can distill the sequence information and build a ‘SNP chip’ that we all can use as a reference in our breeding work,” he says.

SNP-chip technology will allow consortium scientists to detect thousands of small segments of DNA from samples of oyster tissue. Through a process called genomic selection, they can then use these tiny marker regions of DNA to help identify genes associated with important traits. 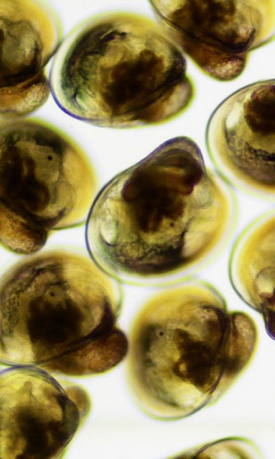 “While disease resistance is the most important trait for the Eastern oyster, we hope to use the technology to select for other desired traits, such as fast growth and hardiness,” says Guo.

Allen says the team will also look for markers associated with resistance to ocean acidification and Dermo disease, and a tolerance for low oxygen and low salinity. He notes that the latter became a major issue last year in the Chesapeake Bay, when record high rainfall and runoff diluted normally salty Bay waters to levels that were detrimental to oyster growth and survival.