“The nice thing about black holes is that they used to be the objects of science fiction novels,” he said. “These mysterious objects in space. Once you fall in, you can’t get out anymore. Yadda yadda. We’ve all heard the stories.”

Today, Boos is a post-doctoral researcher with the High Energy Theory group in William & Mary’s Department of Physics. He recently was awarded the 2021 P R Wallace Thesis Prize of the Canadian Association of Physicists (Division of Theoretical Physics) and the Winnipeg Institute for Theoretical Physics. The award recognizes his doctoral thesis “Effects of Non-locality in Gravity and Quantum Theory.”

The black-hole guy’s career as a physicist was getting up to steam as black holes moved from the “theoretical” to the “observed” column in the ledger of natural phenomena. In 2015, when Boos was a graduate student at Perimeter Institute in Canada, the LIGO Collaboration announced the detection of gravitational waves from the collision of two black holes. The Event Horizon Telescope Array documented its first black hole in 2019, when he was a graduate student at the University of Alberta.

“But now there is a huge sort of problem, right? Albert Einstein’s theory of gravity predicts the existence of black holes, and now they have been observed,” Boos said. “That’s fantastic, but it also means that you have to take them more seriously.” 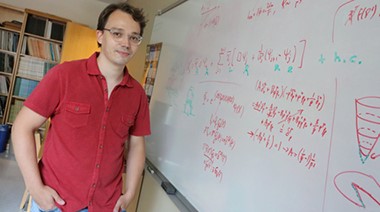 Boos and other theoretical astrophysicists are taking black holes seriously — very seriously. They’re working on potential explanations of the physics inside a black hole. The edge of a black hole is known as the event horizon, and inside the black hole, Boos explained, is a thing called a singularity. But it’s a bit problematic to refer to a singularity as a “thing.”

“It’s a place in space and time where something bad happens,” Boos explained. “It’s where space and time cease to exist. That’s how I like to think of it.”

He explains that physicists consider space and time as a single concept: spacetime. “These four numbers, latitude, longitude and elevation, then the time on the clock — the combination of these numbers makes up spacetime,” Boos said.

Spacetime is central to causality itself, Boos writes in his abstract, making us capable of “distinguishing the past from the future, and the cause from the effect.”

In short, spacetime rules. Except when and where it doesn’t, like the singularity inside a black hole. Mathematically, Einstein’s theory describes gravity as the curvature of spacetime. For example, massive bodies orbiting a star are not actually attracted by a gravitational force: They’re rolling in a curved, sloping gravitational field.

“And what happens at the singularity is that the slope becomes infinitely strong. Not large, but really infinity,” Boos said. “And we physicists think that’s highly unphysical. How can anything really be infinite?”

He explained that “infinity” is a common bugaboo for physicists. Infinity has never been observed and may not even exist in the physical world. Boos said the math in many physics theories leads to infinities and theorists work hard to refine the theories to remove that problem.

“People think that these infinities inside of black holes, these singularities, are just an artifact of Einstein’s theory,” Boos said. “Einstein’s theory could be incomplete. It is a classical theory; it doesn’t know about quantum.”

Boos said that he and many other theorists believe that a fully realized theory of quantum gravity will resolve the infinity problem.

“The problem is not so much to find a theory of quantum gravity, there are several promising candidate theories that people came up with,” he said. “But you have to think about a way to experimentally verify them.”

Boos’s thesis suggests a potential way to get around the singularity-infinity paradox. Instead of inventing an entirely new theory it centers on a concept called “nonlocality.”

“The laws of physics that we know, almost all of them are local laws of physics,” he explained. “That means that if you want to predict what happens at one point in time and space, all you need to know is what’s going on right now or at some time in the past. If you see waves in a pond, for example, you know somebody threw in a stone. That sort of thing. But when you have nonlocality, all that can be very different.”

He went on to explain that the concept of nonlocality has been part of physics theory for some time. “People were talking about nonlocality in the ’30s,” he noted. At a basic level, Boos said nonlocality means conceptualizing a state in which you can no longer distinguish two neighboring points.

Boos addresses nonlocality through something he calls “mathematical sandpaper,” drawing on mathematical concepts such as Green functions and incorporating elements of string theory and non-commutative geometry.

“Nonlocality takes off all the sharp corners, right?” he said. “It makes everything more smooth. And that’s the idea. If you take the idea of a singularity as an infinitely sharp needle that pierces a hole into spacetime, you could take your mathematical sandpaper and make it more dull. It would still be sharp — but not infinitely sharp. But that’s all we want. We don’t want infinity, and spacetime will be safe.”

At William & Mary, he is applying the concept of nonlocality to particle physics as well, working with another theoretical physicist, Professor Chris Carone.

“What I love about nonlocality is that it challenges the way we think about space and time, in many different areas of physics — not just gravity. It really keeps you on your toes! ” Boos said.