Diamondback terrapins have always found it hard to catch a break.

Up through the first third of the last century, terrapins were at the top of the list of luxury foods. Joseph Mitchell had a 1930s piece in The New Yorker reporting on a firm in the Fulton Fish Market that sold 2,000 quarts of diamondback terrapin stew a year.

A patchwork of state and federal regulations keep America’s only truly estuarine turtle from being served up as seafood, variously classifying terrapin as endangered, threatened or species of concern throughout the species’ East Coast range.

Randy Chambers explains that diamondback terrapins continue to be unintended victims of the seafood industry, as they end up drowning as bycatch in crab traps. Chambers, the director of William & Mary’s Keck Environmental Field Laboratory, is leading a team that’s trying to find a way to keep turtles out of the traps in the first place .

Much of the effort to keep terrapins out of traps has been concentrated on bycatch reduction devices, or BRDs. Chambers said that the crabbing community has been resistant to adopt BRDs voluntarily and also has resisted any proposed regulations.

Chambers, Reinsel and two William & Mary undergraduates hope to win over even the most hard-shelled BRD skeptics. This summer, they have been testing a new BRD, designed by Reinsel. Her design has an oval opening, a departure from the usual rectangular BRD.

“The oval BRD design was originally dreamed up by J.D. Kloepfer of the Department of Wildlife Resources, who asked me if anyone had ever considered using oval BRDs on crab traps,” Chambers said. “I thought this was an excellent idea, and decided that it would be useful to compare the efficacy of the oval BRDs vs. rectangular BRDs.”

Reinsel created the original 3D print design on Tinkercad, and then worked with students and employees at Swem Library’s Makerspace to print around 50 oval BRDs for use during the summer experiment. 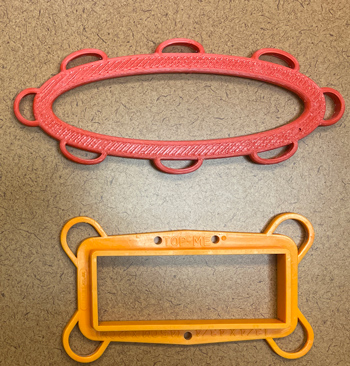 The principle of a BRD is to narrow the oval opening in a crab trap so that crabs — even the jumbos — can enter, but terrapins can’t. Chambers explained that there are no good statistics on the toll of crab traps on Virginia’s terrapin population. Reinsel added that there are several reasons for the dearth of data, beginning with the fact that because any Virginian can run two crab pots without a crabbing license, there is no way of knowing how many recreational crab pots are out there, especially in the shallow, estuarine waters where blue crab and terrapin habitat overlap.

“We don’t know whether more terrapins are killed by recreational crabbers or by commercial crabbers who venture into shallow waters to crab,” Chambers said. “Another issue is that commercial crabbers lose a large number of their traps annually because of storms, propellers slicing through float lines, etc. These ‘ghost pots’ may be death traps for terrapins, especially when the traps get carried into shallow water by storms.”

Michael Gibson ’23 and Natalie Klesch ’23, spent their summer working in the field to collect data for a study comparing rectangular BRDs against the oval design. They received funding from William & Mary’s Charles Center and Committee on Sustainability for their research; the project itself benefited from support from the PADI Foundation.

Gibson and Klesch worked from a canoe at Indian Field Creek and Felgates Creek in the Yorktown Naval Weapons Station on the York River, an estuary of the Chesapeake Bay. Chambers noted that the group received special permission to conduct the study in areas closed to both commercial and recreational fishing.

The study used traps much like a commercial or recreational crabber — but fitted with a snorkel that allows a trapped terrapin to swim up to the water’s surface and breathe. Working with Chambers and Reinsel, Klesch and Gibson tended the traps every day, pulling up the traps, extracting crabs and terrapins, rebaiting and re-setting. They measured their catch — crabs as well as terrapins — and recorded the data.

“At the end of the summer, they did a preliminary analysis of the data and presented their findings at the Mid-Atlantic Diamondback Terrapin Working Group conference in late August,” Chambers added. Reinsel documented the work in a video, which has been submitted to the Coastal and Estuarine Research Federation’s film festival.

Preliminary results show that the oval design was just effective as the traditional rectangular designs at terrapin exclusion, but the new design has one significant advantage.

“It is much easier to install,” Reinsel said, “because the oval shape of the funnel lends itself better to an oval BRD. Unless you have very small hands, it can be difficult to install rectangular BRDs in crab traps — it’s literally, a square peg, round hole phenomenon. It takes about half the time to install an oval BRD vs. a rectangular BRD per funnel.”