Jonathan Allen has good news and bad news for Australians regarding the crown-of-thorns sea star.

The bad news is that the fecund and voracious destroyer of Indo-Pacific coral reefs has a previously unknown method of reproduction.

The good news is that the Australians might be able to limit the outbreaks of these coral-munching echinoderms by using this new knowledge.

Emily Richardson, a 2018 M.S. graduate in biology, is a co-author; her work was supported in part by a grant from William & Mary’s Reves Center for International Studies. She is now in a Ph.D. program at Monash University in Australia. Other authors are Dione Deaker and Maria Byrne of the University of Sydney and Antonio Agüera of the University of Brussels. The project was funded by was funded by an Ian Potter Foundation Grant from the Australian Museum's Lizard Island Research Station. 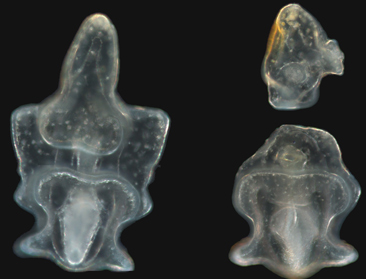 The crown-of-thorns is an infamous pest, responsible for the loss of immense stretches of coral throughout the Indo-Pacific region, especially on Australia’s Great Barrier Reef. It’s been the object of concern and media exposure for a couple of decades. Many people assume that because it does so much harm, the crown-of-thorns must be an invasive species, but it’s not.

“It’s native to the Pacific,” Allen said. “They’re widespread and we now know that there are four species.”

From an ecological standpoint, the crown-of-thorns has the same impact whether it’s a single species or four, he added. They’re all corallivores —coral eaters.

“And they pretty much exclusively eat coral,” Allen added. “They eat a lot of coral.”

“They get in what they think is a good spot,” Allen said, “then they kind of throw their stomach up out of their mouth and just lie there and digest the coral outside of their body.”

“What causes an outbreak? That is the big question. That is the question everyone wants the answer to,” Allen said. “There have been multiple hypotheses going back decades.”

Explanations for outbreaks are classified generally as either “top-down” or “bottom-up.” Allen said that “top-down” ecological hypotheses were au courant in the 1960s among scientists trying to explain crown-of-thorns outbreaks. He explained that the top-down hypotheses suggested that the starfish numbers were exploding in response to decreased predation. He gave the example of large sea snails, commonly called tritons and helmet snails. They are predators of the crown-of-thorns.

“They are long-lived, slow-growing animals, and they make good additions to shell collections,” Allen said. “Divers and tourists have collected them — probably going back to Cook.” 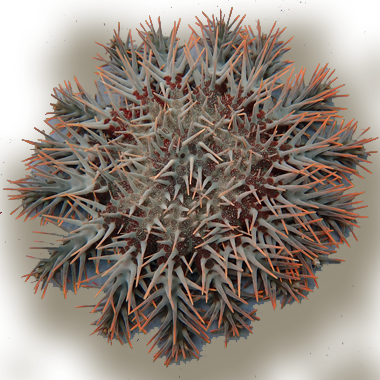 Allen said the most recent thinking is that, while the decreased number of crown-of-thorns predators has some impact, a bottom-up explanation has more to do with the cause of outbreaks.

Bottom-up hypotheses simply suggest that the crown-of-thorns are reproducing and/or growing to maturity much more rapidly than anyone realized.

Mature crown-of-thorns reproduce sexually, a process that, like its feeding, is crude, but effective. Allen said the COTS have distinct genders, but there is no boy-meets-girl stuff.

“They’re basically bags of gametes. The males just emit sperm,” Allen said. “The sperm drift around on the current, along with chemicals that prime the females. The females release their eggs. Fertilization has a large random element to it.”

COTS sex won’t inspire many poets. And random and crude as the process is, it works quite well: The team’s paper points out that a single mature crown-of-thorns female can produce as many as 100 million eggs each year.

Scientists have found that many of those countless eggs were getting fertilized. Allen explained that advances in technology have allowed researchers to get a handle on the population of crown-of-thorns larvae, which are microscopic in size and drift along with the phytoplankton they eat.

“Through the ease of genome sequencing, you can go out on the reef, take a water sample and see the DNA in the water,” Allen explained.

After reading a couple of estimates of crown-of-thorns larvae population, Allen said he retained one comment in the literature: “‘There is essentially a continuous cloud of larvae over the reef,’” he quoted. “They’re everywhere.”

Allen and his collaborators started thinking about larval cloning: What if those baby, microscopic starfish were out there on the reef in their uncounted gazillions, making copies of themselves?

“The phenomenon of larval cloning is well known,” Allen explained. Other echinoderms — even other starfish — reproduce through larval cloning. Even coral larvae clone themselves. “But no one had thought to look at crown-of-thorns before.”

It was an understandable oversight. Sexual reproduction of crown-of-thorns is so successful that larval cloning seemed superfluous. But, Allen and his collaborators were curious enough to begin watching larvae back in the lab at Orpheus Island Research Station in Australia.

They only recently were able to witness an act of crown-of-thorns larval cloning, even though they knew it was happening: “You put one larva in a beaker,” he said. “You come back the next day and there are two.”

They wanted to witness the stages of cloning, and clock the process. Despite their assiduity, for over a year they were unable to see an act of cloning. The watchword in the lab became “A watched larva never clones,” Allen said. Then one day, Allen was in the microscope room with one of the Australian co-authors.

“We were taking photographs and measuring these larvae,” he said.  He was wielding his pipette, “And while I was putting this larva on a microscope slide, it just cloned! Right in front of me.”

“And it happened like that,” he said, snapping his fingers. “It explains why we don’t usually see it. It was essentially instantaneous. I was yelping and screaming.”

Allen described the larval cloning process, which he says takes less than a second and starts at the head.

They’ve developed an understanding of some of the cues that prompt larval cloning. Chief among them is a correlation with high-nutrient water. Allen said many of Australia’s eastern rivers have become loaded with fertilizer used in growing sugar cane. The rivers bring the nutrients out to the ocean reefs, a process — known as eutrophication — that he said is similar to what is going on in areas of the Chesapeake Bay.

In abundance, phytoplankton — microscopic algae — not only feeds larvae, but also prompts them to clone. Other larval-cloning echinoderm species were known to respond to high levels of phytoplankton blooms by cloning at higher levels. Allen and his group discovered that the crown-of-thorns had a similar response.

“It makes sense,” he said. “From an adaptive standpoint, if you’re a larva in a low-nutrient environment, you’re not going to want to split your resources. But if you're a larva, and there’s plenty of food around, well then — bink! You split into two and there’s plenty of phytoplankton here for both of us to eat.”

Allen said the team is moving on to address questions that remain about various aspects of larval cloning. For instance, he believes that there is some plane or hinge below the larval mouth that facilitates the cloning split. He also wants to map out the adaptive cost-benefit analysis of larval cloning.

“Obviously there is a big benefit, which is there are two of you, rather than one of you, but there also are costs,” he said. “For instance, it takes time to rebuild the larval body that you’ve split from.”

Allen said his team’s discoveries pointing to the connection between excess nutrients and crown-of-thorns outbreaks can help Australians make decisions that can help alleviate crown-of-thorns predation on the Great Barrier Reef, a source of national pride as well as tourist dollars.