An industrial steamroller may seem a curious tool for producing art, but its presence at William & Mary signaled the culmination of a piece produced by many creative minds.

Steve Prince, director of engagement and distinguished artist in residence at the Muscarelle Museum of Art, culminated his yearlong Links Steamroller Project with the event Nov. 7 beside the Wren Building. Hundreds of people contributed pieces to the community art project, which commemorates the 400th anniversary of the first enslaved African people to arrive at Point Comfort in Hampton, Virginia.

Prince said this was just the first “spark” of a planned annual event.

“So we can continue to remind of what took place in the past, that we do not forget the dirge of that past,” said Prince, referencing his native New Orleans’ jazz funeral tradition. “But with the hope that we all can receive a second line together.”

The finished piece was transported and installed at the Muscarelle, where it will be part of the “1619/2019” exhibition that runs through Jan. 12. The exhibition, organized by the museum for the 400th anniversary, features works by emerging and established African-American and Native-American artists that address the complex experience of slavery and forced migration, according to museum officials.

African drumming and dancing provided celebratory accompaniment throughout Thursday’s event, which began with W&M Professor of English Hermine Pinson reading her “Libation poem.” She said she had added to and revised an existing poem, adapting it for the occasion.

“Our hands make a human bridge suspended between love and love on this earth and beyond. …  Arise now, it’s time to begin the dance of days to come,” Pinson recited. 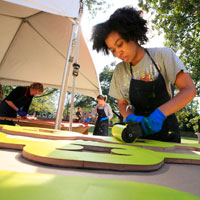 She poured water on the ground for a libation ceremony, and then Prince gave opening remarks with a nod to the 400th but a look forward.

“But hopefully as creatives and as people who are thinkers and people who are lovers of life and lovers of the blood that flows through all of our veins, we will know that the links are not about the limitations of slavery or the stifling nature of slavery that took away people’s humanity. But we know that these links basically define who we are and how we are all connected.”

Prince has been gathering pieces for the project for the past year. He engaged people from various cultures and age groups, both in the U.S. and internationally, to create small woodcuts that were inserted into a large-scale, puzzle-like matrix.

Participants designed, cut and colored their own blocks that would eventually become part of the four larger 8-foot by 4-foot pieces. A chain of links runs through the middle, with assembled interlocking pieces above and below it.

Prince tried to involve as many people at W&M and the local community as he could in the creation. That totaled more than 500 people from more than 20 countries, he said.

Earlier this semester, for example, students in W&M Instructor of Africana Studies Mei Mei Sanford’s Black Speculative Arts and African Religions course made pieces at Prince’s workshop in Merchants Square. Students drew designs on the wood pieces, cut the designs in using electric tools and then painted their pieces.

Prince said the culminating event beside the Wren was designed to “basically rewrite the history that was sown into this ground.”

“And so when we see this piece come together and we’re pressing it all together as one, as these chain links symbolic of all of our bodies connected together, we’re making a statement bold today in 2019 on this campus because, again as I said, we want to rewrite that history and create something new in our connections.” 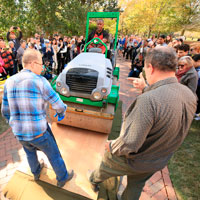 W&M art students, led by Professor of Art Brian Kreydatus, inked the four panels with rollers under a tent in preparation. The panels are individually dark blue, black, red and green with bright yellow links running through the middle.

Each of the panels was laid down on the brick walkway, and attendees helped press paper down on top of the block, then blankets, followed by plywood. Driving the steamroller over the woodcut pressed the paper into the ink, producing the print.