Practice was over, and William & Mary men’s basketball coach Tony Shaver had given the Tribe his final instruction of the day — don’t stay up until 3 in the morning; rest up for the Colonial Athletic Association tournament – when Nathan Knight ’20, the team’s 6-10 center, picked up a basketball. Walking over to talk to a stranger, and with a flick of the left wrist, Knight launched the ball from about midcourt toward the basket at the closed end of Kaplan Arena.

Passing through the orange hoop, it became apparent that they call it “swish” for a reason.

He didn’t stop to admire his artistry. Nonchalantly, as though it’s his norm to make jumpers from 45 feet, he glided over to a waiting chair and sat to talk about life as a budding college superstar. Then again, as two announcements on Friday signify, perhaps he’s already in full bloom.

In addition to being named first-team All-CAA, the Naismith Memorial Basketball Hall of Fame announced that Knight is one of five finalists for the Kareem Abdul-Jabbar Center of the Year Award, the winner to be revealed in late March.

The panel of judges was obviously impressed, as they should have been, that Knight leads the Tribe in scoring, blocked shots, field goal and free-throw percentage. He’s half-a-rebound away from leading the team in that category and, at 103, he’s a mere four assists from being the team's best at setting up others to score.

If you don’t think that in the span of about one month an already excellent player can transform himself into a dynamic focal point that is every opposing coach’s worst nightmare, you haven’t been following Knight and the Tribe lately.

In the last six games, Knight has increased his scoring average by two points, a monumental achievement given that there were 24 games preceding it. It started with a 39-point effort in a loss to Hofstra, followed by 35 against Elon, 30 against College of Charleston, 18 against UNC Wilmington, 19 at Towson and 29 at James Madison. It’s no coincidence the last five were W&M victories.

Neither is it coincidence that Knight has ramped up his scoring. It’s the culmination of three years of cajoling, berating and encouraging by the coaching staff.

“One of the things we loved about Nate in recruiting was his ball skills, his vision; he’s a great passer,” Shaver said, mindful that Knight was briefly a 5-11 guard as a high school sophomore before sprouting eight inches in three years. “He loves to pass. What’s changed about Nate in the last month is that we’ve finally convinced him to be more aggressive. His assists are still high, just not as high. He’s much more of a factor inside. 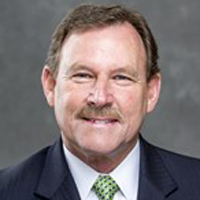 “We definitely have met with him a lot and talked to him about those things. But if you listen carefully in practice and game day, he used to catch it on the block and look to pass it. We get on him if he does.”

“Usually coaches get mad at players for shooting too much, but I was getting into trouble because I wasn’t shooting enough,” he said. “The coaches broke it down to me: ‘I understand you want to get your teammates involved. You want to get them shots, but for us to be at our best we need you scoring at a high clip.’”

“Sometimes, I get a little more pleasure than I should,” he said, a trait he said that goes back to his freshman season in which he averaged just 17 minutes a game.

“I knew as a freshman I wasn’t expecting to get a lot of shots but watching the glow my teammates got from knocking down a good shot is something that you can’t put a price on,” he said. “For them to feel like they’re making a contribution to the game is something I value more than scoring points.”

Then came a Feb. 2 game in Hempstead, N.Y., against league-leading Hofstra. Knight attempted 24 shots, made 16 of them, and 7-of-10 free throws in scoring 39 points, the fifth-highest scoring game in school history. The only downside was that the Tribe lost.

“Being able to go in there and play at such a high level … that 39 felt good because coach wasn’t mad at all; he was happy that I was putting up shots,” he said. “Just seeing the impact that 39 had not just on me but on the emotions of my teammates and coaching staff allowed me to make that step.” 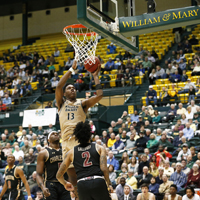 Another critical factor in Knight’s development this season is his acceptance of leadership responsibility. The Tribe lost seven players after last season, endured a rash of injuries early this year and Shaver and Knight concede there was a leadership vacuum. The player has stepped into the breach.

“The last six weeks, Nate has been a fabulous leader,” Shaver said. “He's much more vocal, much more consistent in his effort. He realizes the young guys are going to do what he does, and if he’s not playing hard, they’re not going to play hard.”

It’s a role Knight has craved all the way back to his recruitment, when the coaching staff told him they more than wanted him. They “needed” him to come to Williamsburg.

“That’s a tall task (to ask) of any player, but it also opens up a great opportunity to prove yourself,” Knight said. “The things I want to do with the sport of basketball and my life in general … it was almost divine intervention for me, just the opportunity to come to play high-level collegiate basketball as well as get a high-level education. Any kid would dream of this coming from Syracuse, but even more when they tell you that they need you to play a big role for therm. It’s one thing I’ve loved about this place.”

Playing in the National Basketball Association is an obvious goal for Knight. As he says, “Anyone who loves the game as much as I do wants to play it at the highest level.”

Yet it’s about more than that.

Knight wants to be a role model for kids back in Syracuse, a city whose athletes he said are often overlooked if not plain ignored. It may have been a goal of his all along, but a family tragedy brought it into even clearer focus.

Knight’s sister, Yeisha Howard, then 18, was one month into a new job and one week from taking her GED in December 2008. With their mother working two jobs to support the family, Howard made sure the other children were fed and doing their homework. However, she was fatally stabbed during an altercation in the lobby of a Syracuse apartment building in what the senior assistant district attorney described in court as a long-standing feud. Eleven months later, the perpetrator of the attack was sentenced to seven years in state prison.

“Whether they realize it or not, players can have so much influence on their community,” said Knight, who was 11 at the time of his sister's death. “That’s one thing I want to do, be a positive influence. Syracuse gave me a lot of things. It not only showed me the things I need to do but the things I shouldn’t be doing. As much 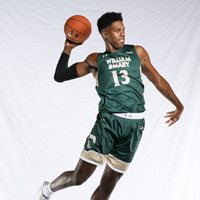 as that hurt me and my family, experiences like that put you in places to have great success.”

Of more immediate concern to Knight is winning a CAA championship and what would be William & Mary’s first-ever NCAA tournament appearance. There’s something about this surging team that separates it from the other two on which he’s played.

The Tribe is eighth in the CAA in defense, hardly great on the surface. But they’re surrendering five points a game less than two years ago, and during the five-game winning streak, their 70.4 points allowed would rank second in the league.

“There’s that old saying that defense wins championships,” Knight said. “Our ability to play defense is going to put us in a good place in the tournament. That’s for sure.”