Perhaps what most bothers Professor Chitralekha Zutshi of William & Mary’s history department is the world’s insistence on viewing Kashmir through the lens of conflict and security studies alone, ignoring its rich and interconnected past, diverse people and complex cultural identities.

“Kashmir is not just a conflict; its history needs to be understood in more complex ways,” said Zutshi, painfully aware that India and Pakistan have been fighting over Kashmir since both countries gained their independence from Britain in 1947. They’ve gone to war three times over this region, in 1947-48, 1965 and 1999, not to mention countless skirmishes in between and since.

Kashmir is nestled in the Himalayan and Karakoram mountain ranges. It is bifurcated by what is known as the “Line of Control,” which runs 435 miles and divides it between India and Pakistan. The Indian-controlled portion totals about 45 percent. Pakistan-controlled Kashmir totals about 35 percent. China controls the other 20 percent.

Zutshi, the winner of the Plumeri Award for Faculty Excellence in 2014, has been at the forefront of a seismic shift in scholarship on Kashmir, dating back to her 2003/2004 book, Languages of Belonging: Islam, Regional Identity, and the Making of Kashmir, an outgrowth of her Ph.D. dissertation.

“At that time there was almost no historical scholarship on Kashmir,” she said. “All you found was writing on the dispute between India and Pakistan and their competing claims on the region. There was very little understanding of the complexities of Kashmir’s past and how we got where we are at this point. (The book) really kind of opened up the field for other scholars to take up the mantle and explore multiple arenas of Kashmir’s past and contemporary situation.” 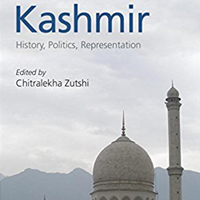 The burgeoning of scholarship on Kashmir in the decades since her first book, which was followed by a second, Kashmir's Contested Pasts: Narratives, Sacred Geographies, and the Histoprical Imagination in 2014, is evident in her latest effort. Kashmir: History, Politics, Representation is a compilation of essays by eminent as well as junior scholars that Zutshi commissioned, edited and to which she contributed a chapter.

“They had to be working on multiple different sub-regions of Kashmir and approach issues from an interdisciplinary lens,” she said. “Scholarly and popular understandings of Kashmir have been focused on the Kashmir Valley, which is the main arena of dispute, to the detriment of the other regions. These regions are just as much a part not only of the conflict, but the history of Kashmir as well.

“I also wanted to include scholarship that discusses Kashmir through the lens of poetry, everyday life, gender and all sorts of other issues that are usually not discussed. The scholarship, at the present moment, stands where I could include all of those themes into the volume.”

The volume “transcends the idea that Kashmir is exceptional,” she said, and explores its similarities and interconnections with other parts of South Asia and the world.

“Because Kashmir has been a conflict zone for such a long time, a narrative of exceptionality has grown around it, that it is an exceptional space, and that the conflict is unique,” she said. “All of these chapters really get us to think about how you can draw multiple lines of comparison with other places, and with a variety of themes, using multidisciplinary perspectives. Kashmir is not really unique. It is in fact the conflict that has produced a narrative of exceptionality around it.”

All the scholars included in the volume, Zutshi said, are active researchers who conduct intensive fieldwork in the region.

“They all work with objectivity, honesty and integrity on this region,” she explained. “They’ve spent years, decades — as have I — actually going into the field. We live there, work with all kinds of sources, and spend weeks, months at a time there. We don’t spend just a week to visit a few political leaders or a single library.”

Response to the book has been positive and gratifying. Publisher Cambridge University Press set up a panel discussion in Delhi that was “mobbed” with interested people. The book has also been reviewed by leading news outlets in South Asia.

“What this book is doing is bringing scholarship to the forefront of the way we talk about Kashmir,” she said. “And perhaps these perspectives will make it possible to resolve the conflict if we begin to think along these more complex lines about the region.”