Close to the time of an election, would texting facts about a politician’s performance, in a form that would not allow for countermanipulation, encourage voters in developing countries to make more informed choices?

William & Mary Associate Professor of Government Paula Pickering yearned to find out. When W&M’s AidData received a large grant from USAID, Pickering became part of a group of international scholars whose work focused on assessing and improving the quality of governance in developing countries. Along with four colleagues from this group, Pickering received a grant from Evidence in Governance and Politics’ Metaketa initiative to study the link between information and accountability. Pickering’s team published in mid-June an article on its research in Uganda in Proceedings of the National Academy of Sciences.

Uganda was a fertile testing ground for several reasons.

The country receives a substantial amount of aid from the international community, and it shows signs of improving governance. But, Pickering said, there’s frustration from those sources and citizens as the country also shows signs of public corruption and a lack of free information to citizens so they can make more informed decisions. As such, she said, it was representative of the challenges many developing countries in Africa face.

Pickering has experience on the subject because of her work in the Balkans, which also receives substantial international support and also is a post-conflict country. For the past seven years, she has sought to understand under what conditions international aid improves local governance.

“Through my work conducting interviews, collecting data with local colleagues in the Balkans, sitting through local government meetings, I became well aware of how much people value good governance at the district level,” where public services affect their daily lives, she said. “I became convinced that closer accountability was a positive mechanism in improving governance at this level.”

In cooperation with local partners from the East African nongovernmental organization Twaweza, Pickering joined forces with Mark Buntaine of Cal-Santa Barbara, Ryan Jablonski of the London School of Economics and Political Science and Dan Nielson of Brigham Young University. They sent 16,083 Ugandan voters 207,940 text messages in 11 languages immediately before the country’s 2016 district elections. The texts covered 762 villages dispersed among 27 districts.

The information covered how incumbent politicians handled their budgets. Did they comply with laws? Or were there irregularities?

It was a daunting, complicated project, although there was no mystery about the origin of the information Pickering’s group sent. All of it was available to the public via the Office of Auditor General, which annually audits different levels of government and publishes public reports.

But while theoretically accessible, the information often is contained in massive, multi-hundred-page reports with hard-to-read language that focused on whether governments at the district level are complying with legal practices around the budget. 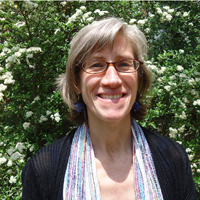 “We simplified and condensed that information in a way that prior experiments that emphasized the importance of information and educating the population found were helpful,” Pickering said. “In addition to clear information we also provided examples of mismanagement. A contractor who constructed one-third of an elementary school roof and then absconded with the rest of the money, for example.

“That kind of concrete example in a subsequent text message we felt would really make clear to people the consequences of budget mismanagement. We also compared a district’s portion of the budget that contained irregularities to the average portion of irregularities in the budgets of districts across Uganda. We wanted to convey that we were putting forth realistic standards, that they knew in other places there were governments that were managing taxpayer money better.”

The experiment was designed to drastically reduce the possibility of countercampaigns by providing the information directly to people’s phones, making it almost impossible for politicians to discredit the information as they had in the past when the information was shared at a town hall meeting. In addition, the texts were highly individualized.

However, the messages had “no observable effect” on votes for incumbent council chairs, despite the fact that district chairs have more control of budget issues than councilors. Pickering’s team theorized, in part, that voters place greater reliance on other sources of information for these higher profile elections.

“These mixed results suggest that text messages on budget corruption help voters hold some local politicians accountable even in settings where elections are not fully free and fair,” the report concluded.

The results were shared with the team’s local partner, Twaweza, a Ugandan nongovernmental organization working to improve grass-roots governance. While Twaweza’s focus has been on improving education, the organization was interested in how using SMS to inform the public might be more effective and cheaper than face-to-face contact.

Pickering said many social science research projects such as the one she was part of end with conclusions that are more “gray” than black and white. However, one conclusion seems solid: Many conditions must be met for the provision of information via SMS to improve electoral accountability. This conclusion was reinforced by other studies included in the larger Metaketa initiative, which found mixed or inconclusive results of the impact of information on electoral accountability. The conditions Pickering’s team found important include that factual information be salient, locally tailored and attributable to particular politicians about whose performance the public lacks sufficient information. All these conditions are unlikely to be found in U.S. politics.

“We all know in the United States we get lots of information on our phone, so much so that this information environment is flooded,” she said. “This is significantly so because of money and technology. That makes it tougher for factual information about politicians’ performance delivered by text messages in the U.S. to influence voters.”