Anne Rasmussen’s Tack Faculty Lecture presentation on Oct. 9, titled “Women Out Loud! The Gendered Landscape of Islamic Performance,” was her answer to a question she posed at the outset: “What is it we can learn through our ears?”

For more than two decades, Rasmussen, an enthnomusicologist and the William M. and Annie B. Bickers Professor of Middle Eastern Studies at William & Mary, has focused on the musical arts in Indonesia, beginning with Quranic recitation in both genders, and covering the vast area from the Arab Gulf to Southeast Asia.

Her lecture, sponsored for the 14th time by Martha ’78 and Carl Tack ’78, was divided into five parts: invitation, contextualization, collaboration, representation and emancipation. The presentation was based on years of interviews, lectures and performances with practitioners of Arab music in Indonesia. Some are famous, like Maria Ulfah, who has performed all over the world. Some are not. Ultimately, it has enabled her to do some “myth-busting,” she said.

For context, an Egyptian university professor named Sheik Abdallah Bayouni was shown on video describing women’s voices as a form of seduction, or “awra,” something that should be hidden from men and not be heard. Although not all Egyptians would agree with his position, the definition of the word also translates to “shameful, defective things, the genital area, parts of the body that must be concealed and women’s bodies.”

But when Rasmussen traveled to Indonesia, where 85 percent of the 270 million people are Muslim, people told her that they consider women’s voices “just regular.”

“The participation of women, with their bodies and voices, in the public expression of religion in Indonesia is notable, in part because of its alleged limitations in other Muslim-majority countries,” she said. “It’s not hard to find women, particularly young women, performing in a variety of configurations.” 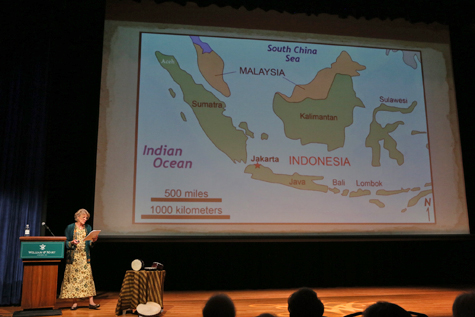 As examples, Rasmussen pointed to slides of a concert at a religious boarding school and other photos of a “Battle of the Bands,” where contestants sang songs made popular by Adele and The Cranberries and their rendition of Europe’s “The Final Countdown.”

The “invitation” portion of the lecture centered on a professor at a women’s college for Quranic Studies in South Jakarta who encouraged Rasmussen to attend the classes he taught on Quranic melodies in 1995. There, she met other faculty and students with whom she practiced, fueling her interest in the topic.

Beginning with her first visit to that professor’s class, she said, she discovered that because of her familiarity with Arab music and her ability to perform songs and improvisations, students and professors were as interested in her as she was in them. Over the years, that led to additional invitations, including one from a group called Kiai Kanjeng, which performs to audiences often numbering in the thousands under the direction of a musician, poet and political activist named Emha Ainun Nadjib. 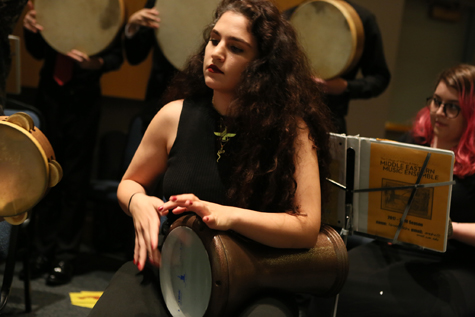 Rasmussen’s slides and a video clip gave the audience a flavor for her fieldwork with the group. While alternately playing with Kiai Kanjeng and filming the band and Nadjib during a concert in Semarang, the tables suddenly turned when she was handed a microphone for an impromptu question-and-answer session. The exchange delighted the audience and band members, who appreciate her interest in their work. It was one of many such experiences where the introduction of her work to audiences, sometimes numbering in the thousands, she said, ensures honesty and openness about her research in Indonesia.

Rasmussen said representing the people and communities with whom she works “is without a doubt the most important responsibility of the ethnographer.”

For her, one important element of that is giving presentations about her work “over and over.”

Rasmussen engaged with a broad range of consultants who took an interest in her work as both and academic and a musician. It was not uncommon that, during the course of an interview with someone from an organization or university, she would receive an invitation to present her work, and/or perform. When she returned, there would often be a couple of hundred people waiting to hear her. She said she was consistently amazed by the intellectual curiosity and openness of the people with whom she interacted and their “can-do-fast” way of operating. 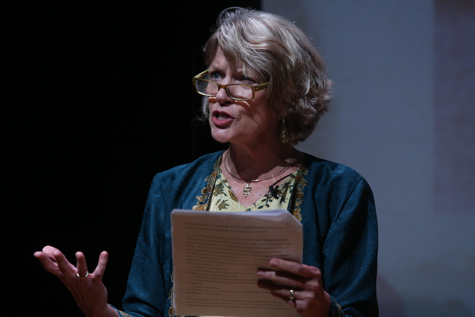 “It was quite remarkable for them to hear how I framed what they did, and also a source of great pride,” she said, “and it was wonderful for me because people would often come up, tell me about their worlds, even ask me for advice, send me e-mails with pictures and so on and so forth.’

Along that same line, Rasmussen has organized two U.S. tours, in 1999 and 2016, for her friend and colleague, Maria Ulfah, the world-renowned Quranic reciter and educator. Together, they have co-presented at Harvard, Brown, Boston College, Haverford, the University of Maryland and the Smithsonian Institution, among others. Next spring, while serving as a professor for the William & Mary in Washington semester, Rasmussen hopes to work with the Freer Sackler Museum to design a website of Ulfah’s U.S. presentations and performances.

These acts of people-to-people micro-diplomacy, she said, have led to “extraordinary” chances for collaborative knowledge and research that keeps her “honest and above board.”