During the summers and holidays she spent in Northern Virginia, Samantha Huge drank in all of the wisdom, hope and enthusiasm offered by her grandmother, Daniela Brabner-Smith.

“She always encouraged me to do my best, but also that no door was closed to me,” Huge recalled. “I could be and do whatever I wanted to be or do. I know that sounds trite and a lot of people say that, but it’s true.”

One of her career aspirations, she said, was to become director of athletics at William & Mary, a university and a location she knew well on several different levels. That goal officially became reality on Wednesday when she was introduced as the successor for retiring Athletics Director Terry Driscoll.

“I spent a lot of time with my grandmother; she was a spitfire who also had the ability to put people immediately at ease,” said Huge, whose grandmother passed away in 2012. “When I got the job, I honestly wanted to pick up the phone and call her; that’s how much she meant to my life.”

The rise of Huge — pronounced Hue-gee — to command of a $24 million department with a staff of 120 is a story of familial support, selfless love and a dogged determination to improve and grow.

And, perhaps, a touch of fate.

Huge’s mother died when she was just a child. Her father remarried, and his wife adopted the children from the first marriage.

“We are one big, beautiful blended family,” Huge said.

Athletics played a large part of the family fabric. Her father played basketball for Florida State. Her brother, Chris ’84, played football for the Tribe from 1981-83. Another brother ran track at Yale and a third, basketball at Illinois. Samantha played varsity basketball at Gordon College in Massachusetts. And, Huge said, although her mother never played competitive sports, she might be the best athlete in the family.

“She does Pilates three times a week, and puts us all to shame when we go skiing,” she said.

Keeping W&M close to the heart

The family traveled to Williamsburg frequently to watch Chris play, and that’s where the idea of a future relationship with William & Mary first crossed Huge’s mind. 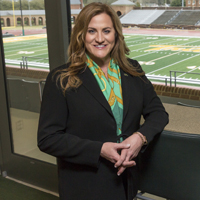 “I have these great memories as a little girl of sitting in the stands watching Chris and his teammates,” she said. “I have memories of the Cheese Shop. One of my fondest memories is riding the ferry across the James River. We stayed rustically; dad put a camper out there.

“I have these great memories of the pageantry of the games, fans that were so friendly and engaging. Those early memories really stuck with me. They, along with the strong academic reputation of the school, made Williamsburg a place that I circled. I knew that if the William & Mary [job] ever came open, it would be special.”

It didn’t take long for that feeling to be rekindled, even intensified, while she was on campus for a couple of days earlier this month.

“You feel the spirit that’s here and meet the people … There was such a level of familiarity, I really felt like I was at home — quickly," she said. "I have a sense of coming home … There’s a spirit and sense on campus that just felt right, felt comfortable.”

Her original plan was to practice law — her grandfather founded what is now the law school at George Mason University and her father and uncle are attorneys. She earned a law degree from Campbell University.

“I thought I really wanted to practice law, but I made some decisions to do something other than that — and I am the envy of my law school classmates, I can tell you that,” she said. “I got the degree and kind of fell into athletic compliance [with the Southern Conference].

“I’m a big believer that things happen for a reason, and I think it’s just beautifully orchestrated that it was this marriage between what I’ve been educated to do and a passion to work with young people and athletics.”

Patti Phillips, chief executive officer of Women Leaders in College Sports, who has worked with Huge for approximately six years, did not wait to be asked for a comment regarding her friend and colleague’s new position.

“Best hire ever!” she exclaimed. “She is a superstar.” 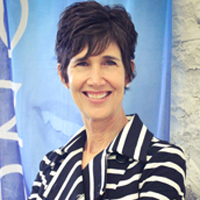 Phillips called Huge “very self-reflective, very collaborative, and has been focused on her personal and professional growth more than many people I’ve come across.” That included attending the executive institute offered by Women Leaders in College Sports (formerly NACWAA), which Phillips called the “highest-level program for administrators who want to be athletic directors or commissioners.”

“Back in the day there used to be a lot of coaches who transitioned to athletic directors,” she said. “They understood student-athletes, and are innately leaders on some level. Now, schools need people that understand the business of running these [departments]. You have to manage money, raise money and understand that you are running a business.

“Samantha went and got a lot more experience on big-budget type stuff. She’s just very well rounded in the industry. Honestly, she’s going to be phenomenal for you.”

Her resume could be viewed as a roadmap to success. From the Southern Conference, she moved to the University of Illinois then Michigan State, Wake Forest, Georgetown, Delaware and, most recently, Texas A&M.

“Every step of the way has prepared me for this,” Huge said. “The academic competitiveness of a place like Wake Forest and Georgetown certainly helps me understand the kind of academic rigor that our students will encounter, and the kind of smarts that it takes to be here. Obviously, there’s the affinity of working at a place like Delaware and knowing the Colonial Athletic Association.

“For the schools like Texas A&M and [Illinois and Michigan State], you see the size and scope of a big athletic program. You take the best of that. Someone asked me what does William & Mary have in common with Texas A&M and it’s actually an easy answer: The passion the fans have, the commitment the student-athlete has to his or her craft and classroom, the absolute fervor they have, whether it’s a fan or an alum. That’s what's alike, and that thread is woven through each of my stops.”

Admittedly uncomfortable that she may leave out someone deserving, Huge nonetheless rattles off the names of some of her biggest influences, family not included.

There’s Phillips, with whose organization she has served in a variety of capacities and who Phillips said “speaks for us a lot.”

There’s Ron Wellman, athletic director at Wake Forest, who Huge said “has always been an example to me of how this is done right, not to mention tremendously encouraging.” 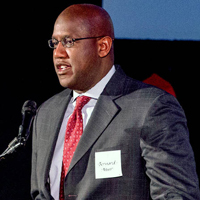 And there’s Bernard Muir, currently the athletic director at Stanford. Muir hired Huge at Georgetown to head the athletic compliance department then brought her with him to Delaware, where she was responsible for day-to-day operations, including fiscal management and capital projects.

“He really gave me the opportunity to lead, both coaches and other areas of the department,” Huge said. “And when we got to Delaware, he handed me the keys to the internal operation.”

Muir said he was only doing for Huge what had been done for him earlier in his career by Kevin White, now athletic director at Duke.

“It’s just giving people the opportunity to delve into various areas of the athletic department that they might not know or be accustomed to,” he said. “But you learn as you go. The opportunities I provided Samantha at Georgetown and Delaware gave her a chance to have a full understanding of some of the activities that occur during campus life. She’s well versed in all aspects of a department, and what she doesn’t know she’ll learn and continue to grow.”

Muir laughed when asked whether Huge had already inquired about William & Mary playing Stanford in football and basketball.

“Not yet, but I expect that call any time now,” he said. “And I’m sure she’s going to want a huge guarantee [for the Tribe to go play]. She’s a very tough negotiator.”

Asked what W&M is getting in Huge, Muir pointed to her “passion for the student-athlete experience.”

“She was a student-athlete herself, she’s been at high academic institutions, so she’s going to respect the balance that needs to be struck between academics and athletics, and making sure that athletics is part of a broader community, an academic community,” he said.

“She’s going to fit right in, and really get up to speed rather quickly to be fully ingrained in the William & Mary community.” 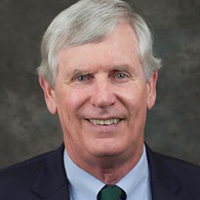 For that to happen, Huge said she will rely heavily on one other mentor, even if it’s in the short term: Driscoll, who she calls the “dean of CAA athletic directors.” Driscoll, who has served the university of 21 years, is retiring on June 30. Huge will begin in May to provide some time of transition and overlap between the two athletic directors.

“I’ve got a lot to learn about William & Mary, and I feel very lucky to have someone like Terry to help me make the transition,” she said. “I’m going to take all I can from him until he gets out of the building — and even then I’m going to call on him.”