On the surface, if anyone was prepared to handle marriage and family during her husband’s 12-month deployment to Afghanistan, it was Marna Ashburn.

Ashburn ’85 grew up in an Air Force family, served five years in the Army as a helicopter pilot, and was a military wife for 20 years.

“There is knowing it and there is living it,” said Ashburn, administrative coordinator at the Christopher Wren Association. “Those are often two separate things. Sometimes you just can’t prepare yourself for living it and going though it. You do the best you can but it doesn’t always turn out the way you want.”

In her new book, Marriage During Deployment: A Memoir of a Military Marriage, Ashburn opens the front door and welcomes us to witness the struggles her family endured – and the happy times as well – during her ex-husband Brad’s deployment.

This is not the first time Ashburn has taken pen to paper regarding this subject. Her previous books include Household Baggage: The Moving Life of a Military Wife and Household Baggage Handlers: 56 Stories from the Hearts and Lives of Military Wives.

Fellow author Terri Barnes, a columnist for Stars and Stripes, wrote that Ashburn’s latest book “could help other military couples to strengthen their own partnerships, not just for deployment but for all the challenges of military life.”

That was her intent, Ashburn said.

“I have processed a lot; this isn’t raw stuff in the book,” said Ashburn, who spent four years writing the book after combing through all of the emails and letters she and her former husband exchanged, as well as the journals she kept during their separation. “It’s processed, and I learned lot. I reflected a lot. We tried to maintain our marriage. It didn’t work out. In the process, we learned a lot and I tried to impart some of those lessons in the book.”

Ashburn has divided the book by themes, one of which is “How Deployment Affects a Family.” The couple had been subjected to two deployments and many shorter separations, and Ashburn wrote that she was under the impression that their two children were coping bravely with their father’s absence. That wasn’t necessarily the case.

When she told her 11-year-old son’s teacher of his father’s upcoming deployment, the teacher said she already knew. Joe had been in to see her with the news and had tears in his eyes.

“That blind-sided me,” she said. “He wasn’t showing his parents, probably trying to protect us.”

Her daughter, then 16 and independent, called Ashburn to her room one night and asked her to tuck her into bed.

“I really miss dad,” she said, breaking down. 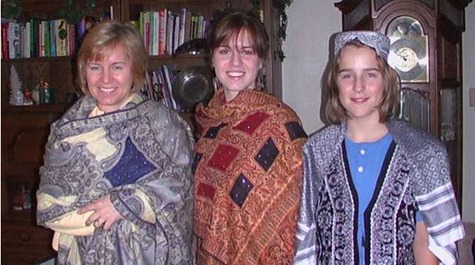 “I think the accumulation of unshared moments in a family and in a marriage really take a toll,” Ashburn said. “That, in particular, created a lot of sadness for me. How do you make up for all of the unshared moments? Anniversaries? Birthdays? Special events with the children?

The Ashburns kept a box on their dining room table, filling it with anything they thought their father would enjoy. They sent him frequent “care” packages. They did everything they could to communicate, but found themselves technologically overmatched.

“Email is its own discourse,” she said. “It’s very bulleted and pragmatic, making it hard to have any in-depth conversation. International telephone lines have a three- or four-second time lag, so it’s impossible to have a conversation that flows. You’re constantly stepping on each other’s thoughts. It was hard, very hard.

“And then when the service member gets home, you have a lot of healing that you have to do together as a couple and family. I think the family probably bounces back a little quicker; as a couple, you’ve got a lot of baggage.”

Ashburn is quick to say that she doesn’t blame the military for her divorce, but that it was “a crucible, a challenging time that accelerated a lot of the problems that already existed interpersonally between us. Our slights and cruelties to one another created the marriage that we had. We own it.”

Ashburn said that the military has made improvements in the way it handles marriage.

“When I was in the Army, we went to Central America for four months,” she said. “One guy’s wife had a baby while we were there, and they didn’t even let him go home to be with her. Now they are so much more generous with that, thinking of the families and their needs.

“But personally, anecdotally, there’s a lot of wreckage out there because of 15-plus years of war, to individuals, families, marriages, children. I don’t think those things have been explored enough. It’s a difficult conversation, but one we need to have as a nation.”