This year William & Mary’s Earl Gregg Swem Library marks its 50th anniversary. A half a century ago, the campus celebrated the opening of its new library building, named after Swem, who served as college librarian from 1920 to1944.

“I love that our library is named after a librarian who was instrumental in building the foundation of the amazing collections we have today,” said Dean of University Libraries Carrie Cooper. “It’s serendipitous that the things Earl Gregg Swem was passionate about during his tenure as university librarian – building library collections, improving access to those collections and increasing library instruction – are the same things we continue to focus on today.”

The library’s history stretches back much further than 50 years. William & Mary’s library is almost as old as the university itself, dating back to the late 1690s. The original library was located in the historic Wren Building and would remain there for more than 200 years. During those years, the library – and the Wren – were destroyed in three separate fires, in addition to suffering damage during the Revolutionary War.

“By the end of the Revolutionary War, the nearly 3,000 books in the college library made it the second largest of its kind in North America, after Harvard,” said University Archivist Kim Sims. “Back then, students had to pay 10 shillings a year for use of the library and could borrow one book at a time between the hours of 9 and 10 a.m. on Mondays and Fridays.”

In 1905, Andrew Carnegie pledged $20,000 for the construction of a new library on campus. The building was simply called The Library, and served as such from 1909 until 1966. That building is now known as Tucker Hall.

By the early 1950s concern mounted about the inadequacies of the library, and in 1961 the development of a new campus west of the existing one began. During Homecoming weekend in 1963, a groundbreaking ceremony prepared the way for the new library. The doors of the Earl Gregg Swem Library opened Jan. 4, 1966, and the building was dedicated on Charter Day, Feb. 12, 1966.

“Unfortunately, Earl Gregg Swem passed away the year before the library opened, but I like to think that if he could see the library today, he would be very impressed,” Cooper said.

Over the past five decades, Swem Library has continue to grow and change, undergoing renovations and additions. The most significant change was the 2003 renovation, in which every floor of the library was touched and the new 100,000-square-foot Warren Burger Special Collections wing was added.

“Thanks to the persistence and determination of our former library deans, Nancy Marshall, who planned the project, and Connie McCarthy, who executed it, we have the beautiful facility that we enjoy today,” Cooper said.

The library has remained central to the academic and social experience on campus, and now its services extend throughout the campus at seven branch and affiliated libraries. With its extensive print, electronic and special collections, Cooper said, the library is an essential resource for W&M’s intellectual community and a leader in defining the place of the academic library in a changing universe of knowledge. 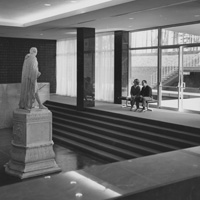 “Our priorities are built around a commitment to build strong collections so research and intellectual curiosity will flourish, and to develop new information services to help our community thrive,” said Cooper.

Swem Library is regularly ranked as one of the best university libraries nationwide by the Princeton Review. According to its 2015 rankings, Swem is the highest-rated academic library in the state of Virginia and one of the top 20 in the nation.

“I’m proud that Swem Library enjoys a national reputation. The Princeton Review ranking is the result of students being asked about their college experience. Our students see us as an important component to their success. Our facility, collections and librarians and staff all contribute to positive student perceptions of the library,” Cooper said.

The library of the 21st century, Cooper explained, has evolved from a passive role as a repository of knowledge to an active role as a place where learning and knowledge creation is possible. At a time when discovery can happen anywhere, students rely on the library to provide a place to be productive. The library continues to attract students and faculty to its collaborative work spaces, high-tech classrooms, multi-media production studios and quiet study areas. In fact, the number of visits to Swem Library has more than doubled over the past decade; in 2015 users visited Swem more than 800,000 times.

“Students and faculty need an inspiring place to connect – with peers, with world-class resources and with their own thoughts,” said Lisa Nickel, associate dean of research and public services.

Looking ahead, Cooper said, the next several years will be exciting as the library sets its sights on creating student assistantships, digitizing its unique materials to make them accessible to scholars worldwide and continuing to invest in library spaces.