Kim Sims became archivist at William & Mary almost two years ago. She studied the voluminous history of the university and thought she had a good grasp of what was – and what had been – housed at Earl Gregg Swem Library.

At least that’s what she thought. She is an admirer of Earl Gregg Swem, who served as the university’s librarian from 1920 to 1944. Under his direction, the library collection grew from 25,000 books and 20,000 manuscripts to more than 240,000 books and 400,000 manuscripts. In a practice almost unheard of at that time, Swem opened the stacks to students and the public.

“I knew that most of the early records were lost (to fire),” she said. “But I was surprised to see how much was here ... (Swem) was competing against collectors at the Virginia Historical Society, which had been collecting well before he did. He also went against other institutions ... He had so much passion.”

Sims carries that passion, too. Others may view university records – at any school – as boring. Sims said that her daily W&M experiences with letters written by George Washington, or Civil War letters, or 19th century travel guides, or Sir Isaac Newton's Principia, and a list of others that stretches as far as the eye can see, is "sexy." She has many favorite pieces of memorabilia and collections. Here, in no particular order, are six of them.

The desk shown is a 1960s reproduction of one of the original nine Supreme Court justices’ desks from 1935. Burger, 20th Chancellor of the university, used this desk when he moved into the ‘Retired Chief Justice’s Chambers’ in 1986. The red appointment book, dated 1994, has the following entry for Saturday, Feb. 5, 1994: “Charter Day [College of William & Mary] 10 a.m.; Robing 9 a.m.” On that day, Burger, who had been chancellor from 1986 to 1993, gave the welcome address for his successor Margaret, The Lady Thatcher on the occasion of her investiture.

With more than 10,000 items, the Chapin-Horowitz Collection of Cynogetica is the second largest collection of books about dogs in the United States. An evolving collection, it contains scholarly works in several languages dating back to 1537, as well as children's literature, breed guides and publications of the American Kennel Club. 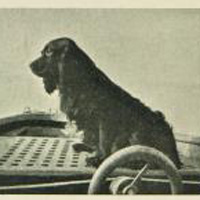 Communication between Swem and Rhode Island Historical Society librarian and dog book collector Howard M. Chapin in September 1937 led to the donation of more than 3,000 volumes and a modest endowment to establish the Peter Chapin Collection of Books on Dogs. The collection grew by more than 6,000 volumes in October 1988 with the donation of the Murray and Shirley G. Horowitz collection of books on dogs.

The Book of Mormon


Not the play, but a first edition of The Book of Mormon, a volume of holy scripture of the Church of Jesus Christ of Latter-Day Saints. Written by Joseph Smith, Jr., it was first published in March 1830 as The Book of Mormon: An Account Written by the Hand of Mormon upon Plates Taken from the Plates of Nephi by publisher E.B. Grandin of Palmyra, New York.

He lived but two years in Williamsburg, and died in 1770, but his legacy at the university where he served as Rector of the Board of Visitors will never fade. He is buried in the crypt under the chapel of the Wren Building. On July 20, 1771, the House of Burgesses of Virginia resolved “that an elegant Statue of his late Excellency the Right Honourable Norborne, Baron de Botetourt be erected in marble at the Public Expence.”

Richard Hayward, a well-known English sculptor, was commissioned to execute the statue under the direction of John Norton, a Virginia merchant in London. Using a wax medallion of Lord Botetourt as a model, the 2,000 pound figure arrived in Williamsburg in June of 1773 and was placed upon the piazza of the capitol. Some time after the Revolution the statue was mutilated; its head and right arm were broken off, and its nose was smashed. The head reportedly was preserved by the landlord of the Raleigh Tavern, Gabriel Maupin, who kept it in his desk.

In 1797, the president and professors of William & Mary purchased the statue for $100. It was brought to the College in 1801, partially repaired, and placed in front of the Sir Christopher Wren Building in the College Yard. There it remained for 157 years except for a brief period during the Civil War when it was placed for safekeeping on the grounds of Eastern State Hospital. The statue was again removed in 1958 and placed in storage as a protection against vandalism and weathering. It found a permanent home on display in the Botetourt Gallery of Swem Library, which held its official opening dedication in 1966. A replica of the statue was commissioned as part of William & Mary’s tercentenary celebration. Sculptor Gordon Kray ’73 created a new statue cast in bronze, which was returned to its position in front of the Wren Building on Oct. 23, 1993.


It is a map of Williamsburg dated May 11, 1782, and drafted by an unknown Frenchman probably stationed with Rochambeau's army. It has been called the "Bible of the Restoration of Williamsburg" because of the detail it gives of the original buildings. The map was given to W&M in 1909 by John D. Crimmins. When a descendant of Crimmins visited the Special Collections Research Center at Swem Library, he explained that his grandfather worked for or owned a firm which did underground excavation in New York City. His firm built the railroad tracks under Park Avenue. Crimmins often bought old New York maps so that his firm could determine where and where not to dig. He purchased a group of maps in Norfolk and upon return to New York, found the Williamsburg map tucked into the bound volume. The map was originally acquired in 1909, with a 2011 facsimile presented to William & Mary by the Colonial Williamsburg Foundation. 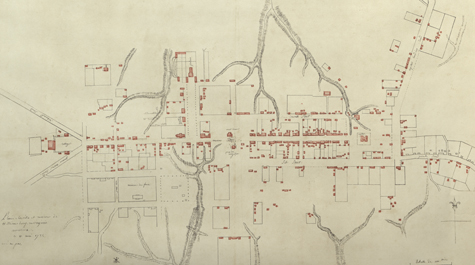 Bryan served as president of W&M from 1934 to 1942 and chancellor of the university from 1942 to 1944. A wealthy man with many influential friends – President Franklin D. Roosevelt attended Bryan’s inauguration, and the Rockefellers were more than occasional guests – Bryan loved pageantry. He started the Yule Log ceremony and Charter Day, beloved traditions.

He also used Phi Beta Kappa Hall (today known as Ewell Hall) to host a series of elaborate Christmas parties. The entire W&M community was invited. All were required to be in costume, the faculty in Colonial garb, the students in something more in keeping with their limited budget. Special Collections has examples of bits of Bryan's costumes, created by Colonial Williamsburg. It is thought that the original intent of the Yule Log ceremony, Charter Day and Christmas party was to boost morale at the university as the nation slowly worked its way through the Depression.