When W&M Theatre opens Aeschylus’ “Oresteia” on Thursday, Feb. 25, the behind-the-scenes story audiences won’t see is as interesting as what they will.

The play marks the final swan song for theatre professor and director Richard Palmer, who is retiring. But the choreographer for the show, Denise Damon Wade, was a student actor in Palmer’s first production at W&M, 36 years ago. And that, too, was a Greek tragedy.

Wade, now associate professor of dance, was a sophomore acting in the chorus in 1981, when W&M Theatre presented “Oedipus Rex.”

She’s come full circle in her journey with Palmer, choreographing “The Oresteia,” Aeschylus’ classic trilogy of Agamemnon, The Libation Bearers and The Eumenides.

She has also held onto a treasure trove of memorabilia from that performance of “Oedipus.” Photographs, fliers, rehearsal schedules, the program, a glossary, a character bio – she’s carefully stored all of it for more than 30 years.

“[Palmer] influenced me enough that I kept these things,” she says, spreading the items out. Among them is a ceramic likeness of Oedipus, handmade by Palmer as a keepsake for cast members all those years ago.

She also has the lyrics for the spoof the cast members created, the Palmer Alliance Theatre, which performed “For Thebans Who Have Considered Patricide When Apollo Ain’t Enough” at a cast party at Palmer’s house.

She remembers students then, too, had to make their own performance masks – sitting still with straws up their noses for the life mask – just as they are doing for “The Oresteia.”

“I have huge respect for him as a professor, for the way he teaches, his knowledge and watching him with the students,” said Wade, who has worked with Palmer on a number of musicals in the intervening years. “He cares so much, not only about the show, but about training them and giving them the tools they need. It’s not only about the play; he’s teaching them about how to be an actor, how to find the resonance of a theatre. They’re learning other skills at the same time they’re learning about this play. It’s going to be a loss for us, when he retires.” 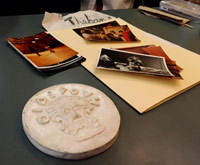 Palmer is the department’s “elder statesman” and a key figure of Williamsburg’s arts scene, retiring after 36 years at William & Mary and more than a half-century as a full-time teacher. He’s watched the theatre department bloom from just five faculty members in 1980 to the mature theatre, speech and dance department of today.

“It’s a different institution than it was 36 years ago, thankfully,” Palmer said. “More diverse – more open – in addition to being better.”

Theatre students today are “a little more swashbuckling” than they were in the 1980s, he said. “They were pretty Southern, pretty disciplined. I always had the nervous feeling that if I’d come in in the middle of the day and said, ‘It’s a beautiful night,’ they would have all written it down in their notebooks.”

Audiences have grown, but their character has remained constant: supportive, with the occasional walkout. They protested in the local press when W&M first started doing colorblind casting in the 1980s. And he was department chair when W&M Theatre put on “Angels in America: A Gay Fantasia on National Themes,” sparking more letters to the editor.

But on the whole, Palmer said, W&M Theatre’s audience has never been as conservative as students have believed. “They are an incredibly open and sophisticated audience, and we’ve always enjoyed a huge level of community support,” he said. “Yeah, they’ll get up and walk out, but they come back.

“One student described William & Mary Theatre as ‘weird theatre, really well done,’ and the audiences know that. It’s not going to always reinforce their values. They also understand that it’s an educational theatre, that it has obligations other than just entertainment.”

Over the years, with more than 75 directing, designing and acting performances to his credit, and never a repeat, Palmer has also published countless articles and five books, including his most recent, Theatre: A Visual History, an online, interactive textbook. He has served as department chair and general director of the Virginia Shakespeare Festival. He was twice awarded Best Director by Port Folio Weekly, and has been active with theatre companies Wedgewood Renaissance and Panglossian Productions. He’s never directed, designed or acted in any play twice.

Palmer noted that along with Wade, another former student, Jon Collins, is a scene designer for “The Oresteia.”

“Denise is part of a long tradition of William & Mary Theatre students coming back to W&M to teach because they understand our students and our values,” he said. “She is not only a wonderful dancer and choreographer, but was also a theatre major, so she knows how to use movement to serve the needs of characterization and plotting. I’m gratified … she came back to work on this production.”

“There were four professional productions last fall of this play,” he said. “You’ve got to ask, why now? Well, the play’s about violence and how we respond to violence. It’s a play about the establishment of a legal system to replace the old blood-for-blood, revenge motif.”

The final act resonates with Athena’s proclamation: “A precedent is being created here, I shall establish for all time a court of law.” Over the next five lines, the goddess sets in place the familiar elements of a trial court – the opportunity to present legal arguments and to call witnesses to present testimony, under oath, before a jury.

“We live in a world trying to deal with violence, just mindless violence,” Palmer said. “But it is violence that is not just arbitrary, despite our characterizations of it. It’s violence driven by a sense of recompense for wrongs done, by people who feel terribly marginalized or violated. So the question is, how do you respond to that? Do you respond in kind?

“This play is about breaking that cycle of violence. So how do you do it? You do it by somehow using the civil structure of a civil society. It’s an issue … good heavens! Look at the current election, in terms of the positions people are taking in response to their anxiety about violence.”