Tongue planted in cheek, Scott Nelson informed 300 or so members of his audience at Kimball Theatre on April 17 that the lecture they were about to hear was a “mea culpa” of sorts for the “mutant strain of scholarship” in which he had engaged and passed on to students at William & Mary.

Nelson, William & Mary’s Legum Professor of History, then proceeded to inform, regale and entertain that audience with tales of American financial panics and impacts that reached well beyond economics. “The World That Panics Made” was the fifth Tack Faculty Lecture, a series instituted in 2012 by virtue of a generous commitment from Martha ’78 and Carl Tack ’78, who created an endowment for the speakers and the series.

{{youtube:medium|FYwBj86F1Hs, Scott Nelson talks about one outcome of his work on financial crises}}

Nelson allowed that many people have tried to define “financial panic,” but that, in the context of the 20th century, it’s simply “when interest rates go up.”

“When the cost of our money goes up, that’s when you know panic times are here,” he said.

According to Nelson, financial panics greatly contributed to the rise of the Whig Party (1837), the election of Abraham Lincoln (1860) and the Civil War (1861), among other major events.

“A lot of the issues that motivated the party system are not the issues you think of – states rights, slavery, succession, for example,” he said. “They were, in fact, financial conflicts.”

One example from early American history that Nelson explored was the first party system. It’s a complicated issue involving government corruption and scandal that started when the 13 independent colonies had no way to pay the soldiers and sailors who had fought the British. 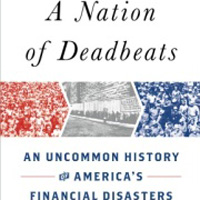 In response, Alexander Hamilton, John Jay and James Madison pushed for the formation of a United States Congress and a constitution that prohibited either states or the federal government from issuing paper money. Instead, after the constitution was ratified, they advocated for the formation of the First Bank of the United States, which would collect outstanding notes of debt and pay them off through money investors had put forward.

It was subsequently discovered that Hamilton’s assistant, William Duer, armed with knowledge of what was going to happen, bought up the notes for pennies on the dollar then cashed them in. As a result, Nelson said, he became America’s first millionaire.

Additionally, at least half of Congress – the people who voted for the formation of the bank – had been issued stock in it. Against the wishes of George Washington, who opposed a party system, Thomas Jefferson and Madison worked behind the scenes to form what became the Democratic Republican party, which ultimately destroyed the First Bank, took over Congress and thrust Jefferson into the presidency.

“That,” Nelson said, “is the beginning of a conflict that continues today over central financial matters in this country.”

So why does understanding financial crises matter? Nelson offered one explanation.

“When you put your 19th-century goggles on, and think about how the 19th century worked and American history in the context of financial pasts, it helps you see things differently,” he said. “It doesn’t help you predict the future, but your stomach turns at different times when you start to think about (how circumstances repeat themselves) ... Seeing that past actually helps you see the pattern that you're in and see it in a different way. That’s what history does.”