Adriano Marinazzo, scholar-in-residence at the Muscarelle Museum of Art at the College of William & Mary, has discovered what he believes to be Michelangelo’s first sketch of the Sistine Chapel. 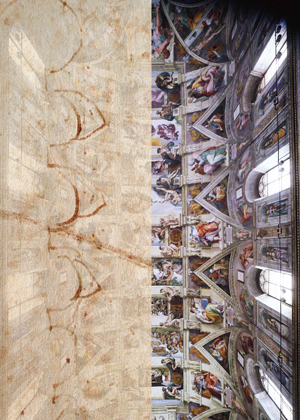 After conducting research of Michelangelo’s sketches on archival papers stored in the Buonarroti Archives in Florence, Italy – hometown of the famous Renaissance painter and sculpture – Marinazzo’s article detailing his discovery was published in Commentari d’arte, an Italian art journal.

In the November 2013 article, Marinazzo argued that the geometric drawings of triangles and crescents on the archival papers are actually the architectural structure of the vault of the Sistine Chapel, and that Michelangelo executed it during the preparatory stages of his fresco work, before the scaffolding had even been set up.

The mysterious sketch has stumped art scholars for years, and now Marinazzo’s research has the art world taking another look at the drawings and chapel ceiling. Marinazzo has received calls and letters from scholars all over the world following a national news article headlined “Found? Michelangelo’s Sistine Sketch” by Wall Street Journal reporter Kelly Crow.

Even the Vatican has commended his work. Several years ago, Antonio Paolucci, currently director of the Vatican Museums, noted the significance of Marinazzo’s work stating, “thanks to his versatile training as an artist, architect, and art historian, Adriano is the right person to continue the best traditions of Italian art, like Italian artists and scholars of the Renaissance have done.” More recently, Paolucci offered his congratulations to Marinazzo on his Sistine research and discovery.

Marinazzo believes the sketch, presumably dating from no earlier than the spring of 1508, may have served as a reminder and jotting for the artist when he was studying the surfaces to be painted and how to arrange the scaffolding. It’s a rare and precious document, said Marinazzo, quite possibly the oldest one of its kind.

“No other rendition of the architectural layout of the vault survives among Michelangelo’s preliminary drawings,” said Marinazzo. “It is almost impossible to find new documents on Michelangelo and especially on the Sistine Chapel.”

Aaron De Groft, director of the Muscarelle Museum of Art, said the discovery is astounding on its own, but even more special for the Muscarelle since the timing correlated with milestone anniversaries for the museum.

“Adriano made this discovery as he was preparing research for our landmark 30th anniversary exhibition Michelangelo: Sacred and Profane, Masterpiece Drawings from the Casa Buonarroti in 2013, a year that also marked five centuries from the inauguration of the Sistine ceiling frescoes,” said De Groft.

Before Marinazzo moved to the U.S., he worked as an architectural researcher at the University of Florence. He has published on the architecture of the Italian Renaissance, especially Michelangelo’s architecture and on the Palazzo Pitti, and has made notable discoveries on the Sala delle Nicchie and on the “casa vecchia” of the Pitti family.

His studies and exhibitions have been held at the Casa Buonarroti, the Salone dei Cinquecento in Palazzo Vecchio, Palazzo Pitti in Florence and Capitoline Museums in Rome.

Currently Marinazzo is developing an artistic multimedia project on the painted architecture of the Sistine ceiling and is doing research for a three-dimensional reconstruction project on the architectural history of the William & Mary campus.