John Spike can remember the day vividly.  It is 1995 in a warehouse in Paris.

Thousands of pieces of art engulf the storage facility. Five hundred Italian reliquaries no less. Sculptures made from stone and marble. He can barely walk through the labyrinth of objects.

There, leaning against a wall, in a stack of paintings, rests an image of St. Francis of Assisi. Spike, who specializes in Italian Old Masters, immediately recognizes the composition, palette and colors of a famous painter trained in Venice that are indicative of the 16th century. 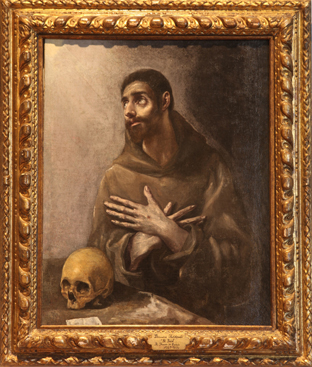 On Friday, April 13, the College of William & Mary’s Muscarelle Museum of Art displayed El Greco’s St. Francis during the opening exhibition of Curators at Work II.  It was the first time the painting had ever been shown in public. "Only three other versions of St. Francis are known in the world," said Spike. A signed version of the painting hung in the Doria Collection in Paris until 1960, said Spike, but its current whereabouts is unknown. "There are two unsigned repetitions in Spain, one of which is in the Lazaro Galdiano Museum in Madrid, and the other, whose whereabouts is also unknown," he said.

“This St. Francis has been lost and found a few times,” said Spike. He’s the chief curator and assistant director of the Muscarelle. “Now, it’s here at the College of William & Mary for our students to study and for the public to enjoy.”

The exact number of El Greco works is unknown, but believed to be around 500. The rare masterpiece is on loan to William & Mary through an old friendship Spike shares with Camilla (Coco) Blaffer Royall. The Blaffer family has been a major contributor to the Museum of Fine Arts in Houston, part of which carries the family name.

Blaffer's friend purchased the painting around 18 years ago at Drouot, the auction house in Paris filled with fine art and antiques. Blaffer had no idea her acquisition was so valuable until she phoned Spike and insisted he come to Paris to examine some artwork.

“I thought it was an ugly painting the first time I looked at it,” said Blaffer. “But when I took it to Spanish art expert [William Jordan] in Dallas, Texas, he confirmed it was an El Greco.”

Blaffer sent the painting to a restorer in London. When the painting was returned to her most of the signature had been wiped away. “Strange things can happen in restoration,” said Spike, “fortunately the painting is as good as ever.”

Domenicos Theotocopoulos – later called El Greco, the Greek, by the Spaniards – was born in Candia, on the island of Crete. Trained as icon-maker in a monastery, he went to Venice (soon after 1560), where Titian became his greatest mentor.

In 1570, El Greco went by way of Parma (where he appreciated Correggio) to Rome, where he met Michelangelo. He criticized his Last Judgment severely, and offered to produce a better composition. But on the whole Michelangelo and the Central Italian Mannerists stimulated him.

After learning about her newly discovered treasure, Blaffer traveled to Italy and purchased a 17th century frame for the painting. It hung in her apartment in New York before Spike called to ask a favor from an old friend.

This semester, he’s teaching a seminar course, Curating and Connoisseurship. Sixteen W&M students are learning what it takes to run a professional museum. He thought the El Greco would be a perfect piece for the students to study and conduct research on.

"Our Museum class has a unique opportunity to research a new discovery by one of the most important masters in Western art, the great El Greco," said Aaron De Groft, director of the Muscarelle. "One of the primary goals of the Muscarelle is to provide students with a laboratory of experiential learning."

The life-size above the waist representation of St. Francis in prayer shows the saint with hands crossed on chest, in front of a skull placed on a rock. One of the saint’s hands has the obvious marking of a stigmata - or a wound produced by a nail.

“The skull is significant because it consists of material matter contrasts visually with  the saint’s ascetic spirituality,” said Spike.  In Christian art, the skull symbolizes mortality and death. When represented with St Francis the skull represents the triumph of the spirit over death, he said.

Part of El Greco’s style is a dreamlike or visionary effect in which some passages seem to emerge from other passages that seem out of focus, said Spike. Tiny touches of light serve to enhance the sense of vitality and motion.  “El Greco uses smooth, long strokes, and then he pauses to put in these tiny accents," he explained.

On Friday, Blaffer toured the College and Colonial Williamsburg before attending the evening debut of the El Greco.  The painting will be displayed through Sunday, June 24.

“When Spike asked to see and use the painting, I said ‘of course,’ ” said Blaffer. “It’s always nice to share art with your friends.”

Now she and William & Mary are sharing it with the world.