A visitor walks into a museum gallery. Everything seems perfect: the paintings are grouped; the labels are carefully placed; the texts announce the significant themes; and the lighting entices. All of these aesthetics boast ‘here is something very special, come a little closer.’

To the untrained eye, it appears effortless.

However, to arrange the perfect room configuration, to create just the right synergy is a daunting task, even for the most seasoned curator.

Students in Dr. John T. Spike’s seminar course, Curating and Connoisseurship, had the opportunity to experience the process first-hand when they were given a behind-the-scenes chance to hang the Muscarelle Museum of Art’s latest exhibition, Grand Hallucination: Psychedelic Prints by William Walmsley and Friedensreich Hundertwasser. Students had already been introduced to the work of Walmsley and Hundertwasser in a lesson co-taught by Muscarelle Director Aaron De Groft and Spike.

The works of art are resting along the edge of a wall, awaiting their final position. Which works should be grouped together? How should these groups be placed to make sense in the room? Students begin to discuss possible layouts. 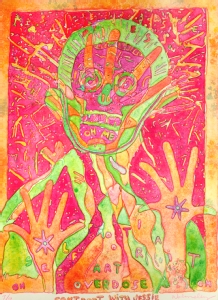 “It’s a dialogue,” explains Spike, “each work communicates to the viewer, each work interacts with its neighbor, and all the works communicate as a team. Our job is to sort and arrange these works in a way that the public, when it enters, is certain that that is the only possible way it could have been laid out.”

“What do you think of the spacing, Chelsea?” Spike calls on a student as he circles the group of learners. In addition to teaching in the Department of Art & Art History, he is also the assistant director of the Muscarelle and chief curator.

“I really don’t like that one where it is,” Chelsea Bell ’12 points to a playful and colorful seaman print by Hundertwasser.

“It’s not as lit up toward the corner and I feel that [the portrait] needs more light,” she says. Shimmering metallic colors such as gold, silver, bronze and aluminum are barely seen in their current position.

De Groft chimes in. “Now remember, the lighting hasn’t been set up, yet. So, you have to imagine as if we have the lights.”

How to space the works is a key question in exhibition installations. One way is to make the spacing perfectly even. Or, if there is a long wall as part of the floor plan, the works could be installed in the middle of the wall, leaving space on the ends, which helps focus attention on the concentrated group in the center.

“We have these long walls, and not so many works, so the idea is to create punctuation points so that visitors aren’t just zinging around,” De Groft tells the students.

Discussions turned to Hundertwasser’s signature piece, Irinaland Over the Balkans, 1971-1972. Hundertwasser (1928-2000), an Austrian artist once as famous as Picasso, is well known for infusing spirals and architectural designs into his silkscreen prints. “Do the features of a yellow cat-like face, embossed with metallic, make this print a candidate for the main wall?” Spike asks his students to ponder whether the piece should stand alone or be centered between the series of four seamen.

And so the afternoon went, piece by piece. Students took votes on where they thought each piece should be placed, and the museum’s art handlers shuffled the works from wall to wall. They ultimately decided upon the final position of the hanging, and learned that patterns of space, the psychology of color and the layout are central to a visitor’s experience in a museum. What is visible to the eye matters most. Every last detail counts.

“We have a philosophy that we don’t paint the walls white,” De Groft declares. “Ever. You make think these walls are white, but they’re not.” Students lean in closer to the wall – squinting – to see what De Groft is teaching the class.  They now see the subtle bluish green tone under the light.

For De Groft, the Walmsley (1923 – 2003) works are particularly revered. As a Ph.D. student at Florida State University, he met Walmsley, who had retired from teaching, but continued to work on his lithographs every day.

“My colleague Ph.D. student said to me, ‘Why are you hanging around with that old man?’” De Groft recollects as he walks over to one of Walmsley’s alter-ego prints, “Ding Dong Daddy,” the longest continued series of prints in the history of art. “And I said, ‘That old man will teach you more than any of your textbooks will.’”

There are 26 total works by Walmsley on display, including prints in Day-Glo metallic ink as well as fluorescent lithographs. The psychedelic movement of the Sixties is evident through the layers of bright colors such as magenta, orange and yellow, beaming back to the viewer.

Three color separation drawings of a “Ding Dong Daddy” print also are included in the exhibition, a private donation made by De Groft.  De Groft, then a pupil, asked Walmsley if he could have these proofs, which were normally thrown away after the printing process.

As the installation nears completion, Melissa Parris, registrar for the Muscarelle, gives the students a tutorial about the reproduction of artwork and the artists’ rights. Exhibitions must be promoted and advertised so visitors will see them, but copyright is a central issue in today’s tech-savvy world.

“Even if we purchase a work of art, or if it’s donated to us, we can own the physical art, but we do not own the copyright,” explains Parris. “The copyright remains with the artist, or the estate, foundation, or trust, after they die.” But that is another lesson.

“We called this exhibition the ‘Grand Hallucination,’ because it’s like the ‘Grand Illumination,” says De Groft.

And like the Grand Illumination, the Grand Hallucination exhibition is certainly spectacular.

The Grand Hallucination exhibition runs from now through March 15.  Tickets are $10.  Admission is free for Museum members, William & Mary faculty, staff and students, and children under 12.