Claude Monet’s majestic Houses of Parliament in the Fog is among the iconic masterpieces included in Seeing Colors: Secrets of the Impressionists, an exhibition on display at the College of William & Mary’s Muscarelle Museum of Art through Jan. 22.

The Muscarelle is the only mid-Atlantic venue for the exhibition Seeing Colors, which features paintings, drawings, and prints on loan from the High Museum of Art in Atlanta.

On display are more than 40 original works by leading Impressionists in Europe and the United States, including Monet, Camille Pissarro, Pierre-Auguste Renoir, Mary Cassatt, John Singer Sargent, Childe Hassam, William Merritt Chase, and John Henry Twachtman. House of Parliament in the Fog is making its debut in Virginia.

To top off the exhibition, Distinguished Scholar-in-Residence Professor John T. Spike is teaching a connoisseurship class at the museum, bringing a fresh approach to interpreting the secrets and techniques of the renowned artists. 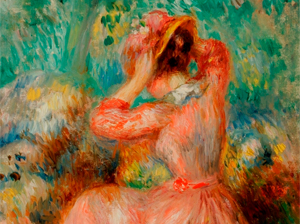 Paintings created outdoors with loose, staccato brushwork and light-filled colors hardly seem revolutionary in the twenty-first century.  But in the 1870s, they were not only radical but also ridiculed for their lack of “finish.” Seeing Colors explores the techniques – some visible, some not – that gave Impressionist paintings the look and feel of the modern world, marking a decisive break with the art of the past.  For example, new research into the optics and science of color enabled the Impressionists to achieve brighter tonalities on their canvases.

Unlike previous painters, the Impressionists chose their subjects to take advantage of these striking effects. Their style was developed by other modern painters, including their great contemporary Edgar Degas, and younger artists like Édouard Vuillard, and Émile Bernard, three artists also represented in the show. In Émile Bernard’s Still-Life with Orange, the artist plays the orange against a sea of blues, creating a vibrating, optical experience not previously seen on canvas.

The exhibition culminates in a special gallery of American Impressionists and modernists from Theodore Robinson and Julian Alden Weir to Mary Cassatt, Childe Hassam and Frederick Carl Frieseke.

Artists living abroad, such as John Singer Sargent and Mary Cassatt, were among the first American painters to embrace Impressionist techniques. Sargent’s Portrait of Ralph Curtis on the Beach at Scheveningen offers a prime example of the technique en plein air, meaning “in the open air” or painted on site rather than in the studio.  In the Sargent portrait, actual grains of sand are trapped within the dried pain on the canvas, visible both to the eye and beneath the surface of the canvas in x-rays. Many other discoveries of the secrets of Impressionism await visitors to Seeing Colors.

The Muscarelle Museum of Art is located on Jamestown Road on the campus of the College of William & Mary in Williamsburg, Va. The Museum is open from 10 a.m. until 5 p.m. Tuesday through Friday and noon until 4 p.m. on Saturday and Sunday. The Museum is closed on Mondays. Docent tours are available at 1 p.m. on Saturday, Sundays, and other times as announced. Admission is $5, and additional fees for special exhibits may apply. Admission is free for Museum members, William & Mary faculty, staff, and students, and children under twelve. For more information about this exhibit or the Museum in general, please call 757-221-2700 or visit www.wm.edu/muscarelle.