Inspiring speeches from an ambassador, a former ambassador, a university president and a designated fellow highlighted a joyous ceremony commemorating the closing of the first Young African Leaders Initiative on July 24 at William & Mary.

Since June 14, Presidential Precinct members had hosted 25 YALI fellows in a curriculum designed to create a network of young leaders, give them an opportunity to seek solutions to the challenges their countries face, learn the best practices in governance, public administration and social innovation and experience American history and culture, among other objectives. The group spent the last two weeks at W&M working with the AidData Center for Development Policy, the Institute for the Theory and Practice of International Relations and the Reves Center for International Studies.

Also in attendance at W&M’s iconic Wren Chapel on Thursday were representatives from AECOM, a global company with 45,000 employees that has become one of the largest providers of technical and management support services in the world. Through a partnership with the Presidential Precinct, AECOM has committed nearly $300,000 to support the Washington Fellowship program’s development and execution.

Her Excellency Dr. Tebelelo Mazile Seretse, ambassador of Botswana to the United States, told the fellows that they “the chosen few,” were selected to represent many others, some of whom may have been more qualified for the program.

“Therefore, you have been given a very high and onerous task, and you must take it like leaders are supposed to. Along the way, there are going to be stumbling blocks, you are going to fall. But a leader is one who falls, learns, gets up and moves on,” she said. “You must have the courage to fall, because there will be times when you don’t know everything you need to know … A leader must have the ability to listen, the tolerance to hear a point of view different from their own.”

The first woman ever to stand for the Chairmanship of her party, Seretse noted the tendency of Americans to think of Africa as one country, not 54 separate nations.

“It shows our unity,” she said, “but it also causes our achievements to fall by the wayside. When you achieve, you must always remember as you go up to have a hand behind you to catch somebody and make them come up, too.

“Leadership is never nice when you are alone. It becomes a party and becomes relevant when you are more than one ... You are challenged as youth, as leaders, to do your best to guide us, and to be inclusive in your regime. We should not be talking about democracy, but about participative democracy … Culture is not static. Our time will come, and we need to take our people along.”

Prior to the ambassador's speech, YALI fellow Rumbidzai Dube of Zimbabwe challenged her peers to have courage as they pursue the ideas they believe will make their countries better.

“We all face many challenges,” she said. “Our governments are not as receptive as we’d like them to be. The environment in which we operate can be dangerous, and our lives could be at stake. But we know that nation-building takes time. Building democracies is a hard and arduous job. It needs visionaries, intellectuals, practical implementers.”

But, she continued, African history is replete with many leaders who exhibited those traits, Nelson Mandela among them.

“Vision, intellect, action. That is what it takes to bring about change. That is the task we have today to go back home to make history. Remember to dream, because dreams turn into visions. Visions become plans. Plans can be turned into designs. Designs can be implemented and spring forth the change we want to see.”

Robert Fritts, former U.S. ambassador to Ghana and Rwanda and second vice president and member of the board of advisors for W&M’s Thomas Jefferson Program in Public Policy, declared that the YALI leaders had taught Americans four important lessons these last six weeks. He used an anecdote about Americans’ disdain for an African dish called fufu, frequently made from the cassava plant, as told to him by a friend. The friend relayed that Americans consider fufu primitive, yet eat “leaves,” which you call salad – “and no African eats leaves.”

“You’ve impressed Americans with your cultural diversities,” he said. “You’ve impressed my countrymen and won our admiration for your achievements and your youth. You’ve made us ashamed for our low voting turnout. And you’ve humbled us about our eating habits." 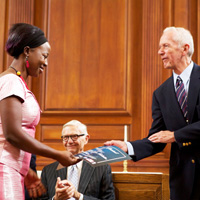 W&M President Taylor Reveley welcomed fellows and their supporters by reiterating the message he delivered to them six weeks earlier during the opening ceremony at the University of Virginia: leadership matters.

“For centuries, William & Mary has been a place where leaders are educated, trained, forged, encouraged,” Reveley said. “Each of you is well on your way to becoming a leader in your country and, I think, a leader not just in your country but for Africa as a whole. I imagine you will emerge from this fellowship experience with friends and colleagues from many countries in Africa with whom you will stay in touch and make common cause over the years.

“I really do believe you are destined to do great good and to make a significant difference for the better in your country – and beyond.”

At the end of the evening, after poems had been recited and songs sung and friendships forever cemented, Reveley invited the fellows to ring the ceremonial Wren bell – a tradition normally accorded seniors on the day they finish their last class at W&M.