Thousands of people – amateur writers – believe they can do a better job between the lines than Rowling, Gene Roddenberry and Arthur Conan Doyle, to name just a few.

Thus was born fan fiction, defined as “fiction, usually fantasy or science fiction, written by a fan rather than a professional author . . . based on already existing characters from a television series, book, film, etc.” Excluded from the definition is that their efforts, well-intentioned, often tongue-in-cheek and almost always fun, usually turn out badly.

Once upon a time, the product of such chutzpah fascinated William & Mary student Katherine Arcement. She couldn’t put it down. Much more recently, the phenomenon amused – and intrigued -- Arcement ’13.

Her reflective essay about fan fiction, which began as a classroom assignment for Visiting Assistant Professor of English Chelsey Johnson a year ago, so impressed the editors of the prestigious London Review of Books that they published a truncated version of it in their March 7 volume.

“It’s a remarkable achievement,” Johnson said. “The (London Review) is one of the most respected publications of its kind today, a top-tier intellectual periodical known for its focus on the literary and intellectual essay.”

The LRB has the largest circulation of any literary magazine in Europe, and its reputation is global, Johnson added.

“Publishing an article in the London Review of Books is a real coup for a college professor, much less an undergraduate creative writing student,” said Susan V. Donaldson, chair of the English department. “This is an accomplishment that underscores just how talented our students are and just how strong our creative writing program is.”

Arcement began reading "Harry Potter" at age 8, and plunged headlong into fan fiction at about 14. 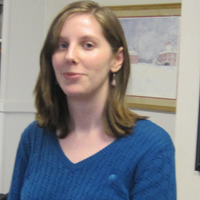 She wrote in the LRB: “I wanted to read more about characters I already knew. . . All writers imitate other writers, but only writers of fan fiction preface their stories with warnings: ‘I own not, you sue not’ or ‘If I owned Star Wars, Jar Jar Binks wouldn’t exist.’ (Others write the theft into their titles – ‘Pride and Prejudice and Zombies’.)

“I read fan fiction online in the nether regions of the web, but once you start looking you find it everywhere: Arthurian legends, fairytale adaptations, a ‘sequel’ by a different author, historical novels, RPF (Real Person Fiction). Geraldine Brooks’s March, a novel which sees the events of Little Women from the perspective of the girls’ father, and which won the Pulitzer Prize? Faaan fiction.”

“They cut from 4,100 words to 2,600; that’s a pretty good chunk,“ Arcement said recently. “But there was a lot of personal stuff that I’m glad didn’t get in…I’m pretty private, which is pretty funny that I’m publishing what some would call a ‘confessional’ piece. But I don’t think of it as confessional. I think I’m just being honest, and that’s not a hardship.”

Arcement said she was drawn to the London Review of Books after she read a story in it about online dating.

“I thought that was sort of in line with the fan-fiction piece,” she explained, “online-related. I thought they might like it. It was a lucky guess.”

Johnson doesn’t believe luck had anything to do with it.

“She is savvy, motivated and sharp,” Johnson said.

Arcement’s essay appeared in a section entitled “Diary.” Johnson points out that the essays that ran in the issues before and after Arcement’s were authored by Booker Prize-winning novelist Anne Enright, eminent poetry critic and Harvard professor Stephen Burt and highly decorated nonfiction science writer Rebecca Solnit. All are major names in their fields and in the literary world at large.

“It's exceedingly rare for an undergraduate student to publish at all in any nationally known literary journal, much less in one of this reputation and caliber,” Johnson said.

Arcement said that she’s only heard positive comments about the essay, though some readers made Twitter jokes about the fact that she’s 20, apparently a little young for the LRB.

Arcement now much prefers non-fiction to fan-fiction, reading authors such as Adrian Nicole LeBlanc. She plans to continue writing after graduation, and hopes to land a job with a magazine.

“Maybe be a fact checker, something like that,” she said. “I think that would be a lot of fun.”