Popp and Stronge were contracted to do this work by the Virginia General Assembly’s Commission on Youth. Their task is to identify positive educational policies and practices in top performing countries for further study to determine the feasibility of adoption by Virginia. This study originated from legislation introduced during the 2011 General Assembly Session by Senator Yvonne B. Miller (Senate Joint Resolution 320).

The study was approved at the Commission on Youth’s April 5, 2011, meeting. Drs. Popp and Stronge have completed the study activities in the Year 1 plan. With the assistance of Dr. Xianxuan Xu, Research Associate in the School of Education, and Auggy Kang, doctoral student, the international comparison report was developed based on findings from an extensive literature review.

This report highlights attributes of top educational systems around the world, including Canada, Finland, Singapore, Shanghai in China and South Korea.  Popp made a presentation on those findings to the Commission, which was broadcast on the American University Radio system in May. Her presentation identified features in the education systems of selected countries which rank among the highest on international assessments that explain and support academic success. 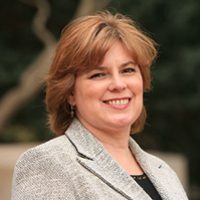 “They put lots of thought and resources into getting things going in the first place,” Popp told the Commission. “They gave programs and projects the time to really work.”
Popp also noted that one of the things holding back American education was the lack of high quality teachers.

“Typically in the United States, about 40 percent of the teachers graduated in the lowest third of their class,” she said.

The second year of the study plan calls for the creation of a diverse work group to explore the policies and practices identified in the report and develop recommendations for implementation of those attributes deemed most appropriate and meaningful for Virginia.

Popp and Stronge will continue the collaboration with the Virginia Commission on Youth for this second phase of the project. An advisory group, which consists of representatives from various stakeholder groups and members of the Virginia General Assembly, will be meeting for a roundtable discussion on June 26 at the Capitol to identify international/national best practices that can be adopted in Virginia.

Listen to the American University segment.