William & Mary’s 14th annual Graduate Research Symposium brought graduate students in Arts & Sciences together with their counterparts from 16 other colleges and universities.

Virginia Torczon is the Chancellor Professor of Computer Science as well as the dean of graduate studies and research in William & Mary’s College of Arts & Sciences. She said the symposium offers a venue for the students enrolled in the Arts & Sciences graduate programs to get together to share progress on their work.

“These graduate students never cease to amaze me with the passion they bring to their scholarship, the quality of their research and the strength of their accomplishments,” Torczon said. “They enrich the intellectual life of the university on a daily basis and are key participants in what makes William & Mary such a special place.”

In a message in the symposium program, Dowd and Carlson noted that for this year, the organizers of the event worked on “emphasizing the ‘&’ in Arts & Sciences” by organizing presenting researchers into groups thematically. They note that it’s a departure from the traditional disciplinary grouping and a move that has resulted in presentations such as Mediated Horizons, which includes talks on both science fact and science fiction.

A total of 158 graduate students participated in the oral presentations and poster sessions held at the Sadler Center. The symposium keeps with tradition in announcing a number of awards to William & Mary’s scholars and researchers as well as graduate students from visiting institutions.

Market Access International, Inc. Award for Excellence in Scholarship in the Humanities and Social Sciences

William & Mary Award for Excellence in the Humanities and Social Sciences 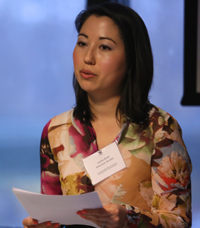 Visiting Scholar Award for Excellence in the Humanities and Social Sciences

William & Mary Award for Excellence in the Natural & Computational Sciences

Visiting Scholar Award for Excellence in the Natural & Computational Sciences