Sometimes, small things come together perfectly to change your life in the best possible way.

For Charles “Drew” Stephenson ’92, it was when his brother-in-law randomly gave him a homebrewing kit for Christmas, starting him on a brand-new career path in the brewing industry.

For Laura Papp ’18, it was when wearing a William & Mary sweatshirt to a yoga class in Stephenson’s brewery led her to a full-time job she loves. 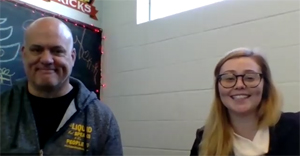 “At the risk of sounding dramatic, Drew Stephenson’s generosity and faith in me (and our mutual education), saved my life this year,” says Papp. “He not only was the reason my bills and student loans were paid but provided me with a small-business family who would ultimately support me throughout the toughest year of my life.”

Papp, who was a kinesiology and health sciences major, was working at a state park in February 2020 when a friend invited her to a yoga class at Pleasure House Brewing. Papp had been to the brewery before as a customer and decided to give the yoga class a try. Afterward, she introduced herself to Stephenson and inquired if he had some work in the brewery available to supplement her day job. She didn’t know he was an alumnus until he remarked on her William & Mary sweatshirt and they struck up a conversation.

Just a month later, Papp, like so many Americans, was laid off from her job due to the pandemic. Stephenson hired her full time.

“I knew a bit about craft beer, but there’s a whole side to the industry that I didn’t know all that much about, but he had a lot of faith in me that I could figure it out. I learned a lot along the way,” says Papp.

Pleasure House Brewing is fairly small, with just six full-time and a few part-time staff members, so Papp had a chance to do a little bit of everything.

“She was interested in selling beer behind the bar, but I had a theory that, coming from William & Mary, she was quite adaptable, intelligent, curious, and that’s proven true. She helps do everything from brewing beer to cleaning tanks, and she has a remarkable aptitude for social media and was able to take that over for us,” Stephenson says.

Papp joined at a particularly difficult time for Pleasure House Brewing. They had just moved into a new, larger space, not knowing that the pandemic was about to shut everything down. 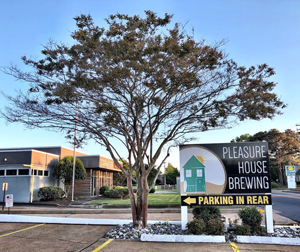 “It was a harrowing time period,” says Stephenson, “but it’s been really heartening to see people making a point to buy local, just to give us a chance to survive. We’re also quite fortunate because if we hadn’t left our previous space, we wouldn’t have been able to do the outdoor seating or food trucks we have now that allow us to stay open during the pandemic.”

Like Papp, Stephenson didn’t originally intend to work in the brewing industry. A history major at William & Mary, he took Russian and Chinese to prepare to work for the CIA. He lived in China for a year, but at the time, the Clinton administration reduced hiring into the Defense Department. He became a high school history teacher and taught in Virginia for 20 years, before deciding it was time for a change. He started Pleasure House Brewing in October 2014 and made his homebrewing hobby into his full-time work.

“Like I used to tell my students, the one thing I was always grateful for and impressed by at William & Mary was that everyone who went there and was successful was fascinated by learning, always thinking and trying to learn new things,” says Stevenson.

Pleasure House Brewing makes a wide variety of beers, 15 at a time, and usually only about three of them are hop-forward. In the past five years, they’ve made more than 260 distinct beers — their February 2021 selection included beers like Shark Tears (a kettle-soured Gose) and Day Pirate (a Belgian strong golden ale). They also sell locally roasted coffee, host a variety of (now socially distanced) events and are trying to create a pub-like atmosphere that’s locally focused.

“My goal from the get-go, and perhaps this comes from my being a history teacher, was to create a place where beer was a vehicle for community — the way that Colonial taverns were the center of social life and news,” he says. “Our regulars say it feels like home.”

While a student at William & Mary, Papp studied abroad in England, and she says Pleasure House Brewing’s community reminds her of the local pubs she visited there — but with a bright, laid-back Virginia Beach feeling.

“Craft beer can be intimidating, but Drew makes beer that you’ve never heard of or tried before really accessible,” she says.

At William & Mary, she found that “community pub” at the College Delly, or if she wanted a quieter place to talk with friends over cheese fries, the very back table of Paul’s — a place where Stephenson also spent time with his friends as a student 20 years prior, “and it hasn’t changed,” he says.

Papp came to William & Mary as a transfer student. She initially found the transition challenging and was grateful for the orientation experience that helped her find her fit at the university. She became an orientation leader to help others feel that sense of belonging at William & Mary as well — experiences that helped develop the people skills she uses at the brewery every day.

“Meeting other students who transferred, as well as those who started as freshmen, helped me see not only that I had made the right choice for myself, but that there was enough room at William & Mary for everybody, no matter their background,” she says. “I’ve tried to keep that open-mindedness as I go into adulthood. Already since graduation, my path has taken me in many directions, and I try to learn as much as I can and be along for the ride.”

Next, Papp and Stephenson are preparing for whatever the pandemic throws their way: They’re bottling as much as they can in case Virginia resumes to-go alcohol sales only, exploring small-scale delivery, developing a podcast and exploring the use of Facebook Live for beer tastings. At the moment, their beers are only available at the brewery.

“I can’t emphasize enough how much help Laura has been in taking what we’ve tried to do with our atmosphere and our community and spreading it on the internet to engage new people,” says Stephenson.

Both have found that the brewery has connected them with other alumni, sparking connections they didn’t expect.

“We were honored to be part of the alumni beer tent at Homecoming in 2019, and prior to that, I didn’t know just how many alumni are owners, brewers, distributors or otherwise in the industry,” said Stephenson.

“Just from working at the brewery and striking up conversations with people, I have met alumni I wouldn’t have otherwise. It’s been great to talk to people who went to school here from all over,” Papp says. “People have who have shared the traditions of William & Mary have an immediate bond.”