by Sarah Glaser, Visiting Assistant Professor of Biology and Marine Science |  May 1, 2013

I have wanted to work in Africa since I was a child. No other continent reflected my dreams like Africa. Maybe it was the majestic lions and spritely gazelles - and the mix of terror and awe I felt watching a hunt on Animal Kingdom.

Maybe it was the openness of the savannah punctuated by blooming acacias.

Maybe it was the books by Jane Goodall that described a woman I wanted so badly to be.

In the end, however, I suspect I was drawn to Africa by a force I could neither name nor recognize as a child: one needs to have a reason to go to Africa.

In graduate school at the Scripps Institution of Oceanography, a reason to go to Africa was planted as a zygote of a thought. I became aware of ongoing economic imperialism in African fisheries. Many African nations sell access to their fishing grounds to foreign, primarily European, industries. The selling nation earns payment but loses access to most of the fish.

I began to wonder, what impact does this arrangement have on the nutrition of Africans who had previously consumed the seafood now served in foreign markets? There are researchers studying this question, but the answers are not yet fully known.

The considerations are complex. Are fishing agreements rewarding African nations for fish they otherwise might not harvest? What happens to the money paid to African governments for this access? Are European fleets displacing African fishing vessels? Are the selling nations being fairly paid for their resources? Do foreign fleets displace local and subsistence fishers? Do these arrangements encourage unsustainable levels of fishing? To put a very fine point on it: are Western nations stealing food from Africa to support an expanding, and often superfluous, appetite for frutti di mare - the fruit of the sea?

To answer these questions, I needed to travel to Africa - finally, I had my reason! In 2011, after completing a postdoctoral research position at the University of Kansas, I set out with colleagues Cullen Hendrix and Idean Saleyhan, then from the University of North Texas, to study climate change and civil conflict in Uganda. My interest was in Lak 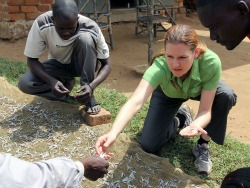 Lake Victoria, the world’s second largest lake, is surrounded by Uganda, Tanzania and Kenya, and it epitomizes the complex interactions of natural processes, like water chemistry and ecology, and human processes, like fishing and pollution.

Over 40 million people live in the Lake’s basin, and millions depend directly or indirectly on resources from the lake: water for irrigation, drinking and bathing; a means of transportation and waste disposal; and hundreds of thousands of tons of fish each year.

Sixty years ago, the primary fisheries in Lake Victoria were native cichlids, catfishes, and native tilapia. In 1954, however, Nile perch was introduced to the Lake. This species has since established itself as one of the dominant species, and it has won that spot by consuming the fishes that once supported artisanal fisheries. Economically speaking, the Nile perch fishery is second only to coffee as the largest export commodity in Uganda, and undoubtedly there are many people who owe their livelihoods to the capture of Nile perch.

However, dramatic changes in the ecosystem of the Lake combined with a rapidly growing human population make it unclear whether the fishery may also be undermining local food security. Almost all Nile perch is exported, primarily to Europe but also to the United States, the Middle East, and elsewhere in Africa.

Those exports constitute a source of protein to which people living in East Africa no longer have access. On the other hand, those exports generate revenue, and revenue can be used to buy grains, goats, and vegetables. Scientists who have studied this issue caution that while malnutrition and hunger around Lake Victoria is rampant, the causes are far more complex than the volume of fish exports from the Lake.

While in Uganda during 2011, Dr. Hendrix and I, now both at William & Mary, were invited to the National Fisheries Resources Research Institute (NaFIRRI) located at the headwaters of the Nile River in Jinja. They have been collecting extensive data about the Lake’s fisheries for decades, but they were looking for training in Geographic Information Systems (GIS) to analyze these data.

A research collaboration was born.

In 2012, Dr. Hendrix and I returned to NaFIRRI hauling with us computers, software, three William &Mary students and a GIS instructor and recent W&M law school graduate. Colleen Devlin ’13, Alyssa Luisi ’14 and Catherine Mahoney ’15 assisted John Holden in teaching GIS to 16 NaFIRRI scientists and students, themselves having just completed a one-week crash course at W&M’s Center for Geospatial Analysis.

In return, NaFIRRI took us to local fishing villages, provided us with translators, set up interviews, and shared with us data from the Lake. Our project had expanded to investigate the interactions between fishing, food security and conflict among Lake basin communities.

On that trip, our students learned more about the world than any single course could teach them.

They met people who simply did not believe that none of us had ever had malaria. They saw massive factories and aquaculture facilities, all Chinese-owned. They met eighty-year old taxi drivers who had Britney Spears ringtones and saw children carrying dirty jerry cans of water for miles for their families. They ate chapati, matoke (banana mash, a local staple), ground nuts and goat. They learned about circumcision ceremonies and the controversies surrounding modern-day polygamy. They danced with children at an AIDS orphanage. They saw for themselves both the promises and perils of globalization in developing countries.

The research we began last year continues, and we will return to Uganda this coming summer of 2013 with more students and more technology. Our research has been funded by the Reves Center for International Studies, the Institute for the Theory and Practice of International Relations, the Center for Geospatial Analysis and the Charles Center.

We recently were awarded a National Science Foundation grant to fund this project though 2014, and we plan to expand in years to come.

And while we bring much with us, we know we always will always return with so much more.

This article originally appeared in the Spring 2013 issue of World Minded magazine.