{{youtube:medium|UEj0l67x6Ss, Robison suggests that neurodiversity is the civil-rights issue of our day.}}
John Elder Robison’s individual trek to William & Mary as scholar-in-residence leading neurodiveristy initiatives may have started with his birth as an autistic some 50 years ago. The route taken connects across centuries.

Robison, an autistic self-advocate whose books are New York Times bestsellers and whose testimony informs international scientific and policy-making bodies, certainly came to William & Mary as an academic. However, he was drawn, he explained, by the chance to explore the place that had been so welcoming to his ancestors, Rowland and Orlando Jones. 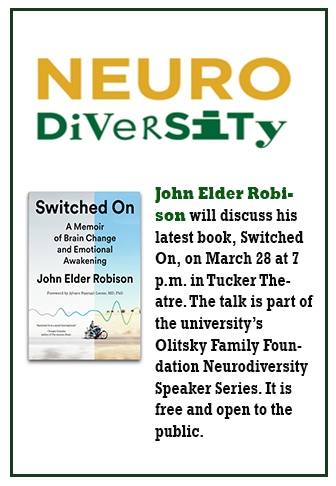 Robison was introduced to the Joneses during a childhood visit to Williamsburg with his grandmother. She explained that his ninth-grandfather, Rowland Jones, was the first minister to preach at the establishment of Bruton Parish Church; she showed him where he was buried at the church, Robison recalled. Jones’ son, Orlando, was an early student at William & Mary. He went on to represent Williamsburg in the House of Burgesses and to serve as usher of the grammar school at the College beginning in 1699, his grandmother said.

Given his knowledge of his family tree, Robison “assumes the likelihood is greater than chance” that either distant relative exhibited traits that today are associated with autism. That insight has led him to ponder: “These ancestors of mine were not just stars at William & Mary, they were leaders in the Virginia community,” he said. “Then you look at folks from my generation and from my son’s generation who are characterized as losers and failures — the assumption that we can’t even graduate from high school, let alone college. We have a whole generation of autistic people who were described as broken and disabled from childhood.

“So, what went wrong there? Did autistic people get dumber and less capable or did society change in ways that exclude us? I think the answer is that society has changed.”

As part of his inquiry, Robison is exploring the ways in which teaching evolved at institutions of higher education. By teaching “real things” in a “hands-on manner,” early universities were accessible to neurodiverse people, he speculated. Today universities, in an effort to teach a subject to be “everyone, everywhere,” rely on abstract presentations as featured in textbooks, he suggested.

“Many autistics, including myself, learn best by doing,” Robison said. “I can’t learn mathematics out of a textbook with abstract symbols, but if you say to me, ‘Let’s go outside and calculate the area of a playing field,’ I can do that very easily. I can embrace practical things even though I reject the abstract.”

He believes a reassessment of what he terms “organic education” in which students “educate themselves in the natural world” would help highly-functioning members of the autistic community access the university, he said.

At William & Mary, Robison hopes to help create a model that is welcoming to neurodiverse populations and that infuses others with a sense of the value of neurodiverse people. If successful, then William & Mary, a school from which a high percentage of graduates enter public service, “has the chance to make a really major contribution,” he said.