A competition is being launched today to solicit conceptual ideas for a Memorial to African-Americans Enslaved by William & Mary.

Anyone may submit ideas between today and 5 p.m. on Oct. 12. A jury of noted museum, arts and history professionals — including alumni, staff, faculty, as well as an undergraduate student — will select three ideas and submit them unranked to W&M President Katherine A. Rowe. Rowe will then review each and determine if one is ready to be shared with the William & Mary Board of Visitors during its February 2019 meeting.

The Board will have an opportunity to see the president’s recommendation and share its thoughts so that a design process can then begin. 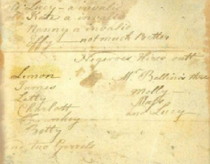 Started under former W&M President Taylor Reveley, the memorial project is part of a long-term and ongoing initiative at William & Mary to research its involvement in slavery and its ongoing relationship with the African-American community. In 2009, the Board of Visitors established the Lemon Project: A Journey of Reconciliation. Throughout the past nine years, the Lemon Project has uncovered much about the university’s enslaved men, women and children, and it has shared those findings through annual symposia, courses, special events and other programming.

“This memorial is such an important project for our community,” said Rowe. “African-Americans have been vital to William & Mary since its earliest days. Even as they suffered under slavery, African-Americans helped establish the university and subsequently maintained it.

“A physical memorial to the enslaved will be a critical addition to our campus landscape. It will allow us to continue to learn of their contributions and remember them — for all time coming. I am thankful for work by so many that has gotten us to this point and I look forward to seeing the submitted concepts.”

A course taught by Lemon Project Director Jody Allen and Ed Pease, instructor of art and art history, in 2014 asked students to develop proposals for a possible memorial to the enslaved. Students from that class later helped form the Lemon Project Committee on Memorialization, which continued exploring the idea and recommended the competition. Allen, Pease and Susan Kern, executive director of the Historic Campus, co-chaired the committee. Last academic year, the university announced its plans for a memorial.

"This is a very exciting time,” said Allen. “We've been working toward this moment, which started with a course, for several years. This is another step in carrying out the Student Assembly resolution which was passed in 2007 and called on William & Mary to research its history as it relates to slavery, make that history public and establish a memorial to the enslaved."

According to the competition proposal, the chosen concept will be a “physical memorial that establishes a new place of community and contemplation within or directly engaging with the setting of William & Mary's Historic Campus.”

“By virtue of its scale, location, materials and narrative content, the design will be a memorial that enriches its setting,” the call for submission says. “It must create a powerful and lasting tribute to the memory of the people who built and served the university, and it must be both conceptually noble and buildable.” 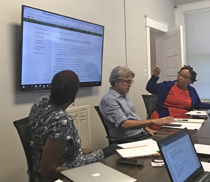 Participants are required to submit a plan as well as a 500-word description of the concept. Additional details on the submission requirements and the process for submission may be found on the competition’s website. Potential participants may ask questions via email or by calling (757) 221-1200. A list of frequently asked questions is also available on the competition’s website.

Phyllis Slade Martin, an independent historian and owner of Slade&Associates, LLC, has been hired as a professional advisor for the competition and will work with the jurors as they evaluate the proposals. Slade Martin served in higher education for many years, both in academics and student affairs, and became proficient at moving projects from conception to completion. A colleague of Allen, Slade Martin worked with the Lemon Project Committee on Memorialization on its competition proposal.

“The vision of the Lemon Project Committee on Memorialization is just very forward-thinking, and it allows for a wide variety of individuals to offer ideas and is structured in a way that allows for development of those ideas,” she said. “I just see it as such an inclusive project which really is very much in line with the reconciliation work that the Lemon Project has already done.”

Nine jurors were selected for both their professional expertise and their familiarity with the university. They are: Rex Ellis Ed.D. '89, associate director of curatorial affairs for the National Museum of African American History and Culture; Artisia Green ’00, director of Africana studies at W&M; Zena Howard, managing director of the North Carolina architectural firm Perkins+Will; Cassandra Newby-Alexander ’92, professor of history, dean of the College of Liberal Arts and director of the Joseph Jenkins Roberts Center for African Diaspora Studies at Norfolk State University;  Ivie S. Orobaton ’19, a history and anthropology major who is the student representative; Justin Reid ’09, director of Virginia Humanities' African-American programs; Judge John Charles Thomas, former member of the W&M Board of Visitors; Sibel Zandi-Sayek, associate professor of art and art history at W&M; and Luiza Newlin-Lukowicz, director of corporate and foundation relations at W&M.

They were selected earlier this year and asked to serve by Reveley.

The jurors will review all submissions and determine the top three and send them to the president unranked. The president will then consider the three and, if satisfied, will share her preference with the Board of Visitors. The creator of the concept shared with the Board will receive $1,000, and prizes of $750 and $500 will be awarded for the second- and third-place designs as determined by the president.

The Lemon Project Committee on Memorialization will keep the community informed about the progress of the competition.

For instance, she added, they will look to the community for ideas on how to make the memorial a living one.

“One that allows continuous engagement and builds on that idea of reconciliation and memory. … The idea is to have it as a place of reflection and a place where there can be continued dialogue and engagement,” she said.

The timeline for the implementation of the preferred concept will depend on what is chosen, what additional professional design or construction steps are needed through a request for proposal and when fundraising efforts are completed. The memorial will be funded with private gifts, and a group of former Rectors at W&M, led by Jeffrey B. Trammell ’73, is helping launch that fundraising process.

A specific location has not been identified for the memorial; however, the competition asks for a memorial that engages with the university’s Historic Campus, which includes all of the areas immediately surrounding the Wren Building, from College Corner to the pathway directly in front of the Sunken Garden.

“William & Mary’s Historic Campus is the appropriate site for the focus of this memorial, because it is the site of slavery on our campus,” said Kern. “The College — what we now call the Wren Building — was not only built using slave labor, but is also the original slave quarters, just as it is the original academic, residential, and administrative building. Men, women and children lived in bondage here as they served the housekeeping, maintenance and instructional needs of the students, faculty and administration. As the campus grew to include the Brafferton, President’s House, kitchens, gardens and other out buildings, enslaved men and women worked there, too.”

Spurred by recommendations from the Task Force on Race and Race Relations, William & Mary has made strides in recent years to honor African-Americans through physical structures on campus. In 2016, the first buildings named for African-Americans were dedicated at W&M. One of those was named for Lemon, a man enslaved by the university and namesake of the Lemon Project; the other was named for a longtime administrator and diversity pioneer at W&M, former Associate Vice President for Student Affairs Carroll F.S. Hardy, known as “Dean Hardy.”

In April 2018, a plaque honoring W&M’s first African-American residential students was mounted at the Wren Building as part of the university’s 50th anniversary commemoration of those students. That same month, the Board of Visitors issued a resolution apologizing for the university’s history of slavery and racial discrimination.