Look around your workplace.

Is there a copy machine?

Do you use a William & Mary-issued cellphone?

Sherrene Moore didn’t hold it up to your ear, but she put it in your hand.

Have you had any work done at the Copy Center?

It might not even be there if not for Sherrene Moore.

Since 1988, Moore has worked in Procurement Services, helping to provide the university community with many of the items that make its work a little smoother, a bit easier, a touch more convenient.

Moore didn’t have to negotiate with anyone to win the 2019 Charles and Virginia Duke Award, which recognizes "outstanding employees for exemplary individual accomplishments in their professional lives and service to the William & Mary community.”

Moore will officially be recognized at Commencement on May 11, an announcement that will delight those who provided her with ringing endorsements.

“She is deserving of the recognition of the university where she has dedicated so many long hours and made so many fantastic accomplishments,” wrote Georgie L. Donovan, associate dean of libraries, collections and content services.

Rita Metcalfe, former senior director of Human Resources Operations, added that “her exemplary, individual service has benefited the employees, students and overall community of William & Mary. … Ms. Moore works hard to accomplish the projects and maintains high standards for her work. Her current and previous achievements show how she exemplifies the best that William & Mary offers.”

Moore described the congratulatory phone call she received from President Katherine A. Rowe as “a complete surprise” and admitted to a little trepidation when Rowe’s name appeared on her caller ID. A few years ago, she put out a solicitation for a piano loan and an interested vendor made several calls to then-President Taylor Reveley regarding the matter. He ultimately phoned Moore to find out what was going on.

She recently put out another solicitation for a piano loan, and the same vendor is interested. 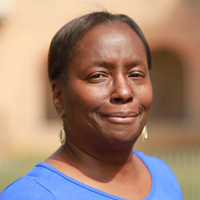 Moore called herself a “professional buyer,” but there’s much more to the job than that. Upon entering W&M in 1988 the buyers at her level didn’t negotiate contracts with vendors, but bought whatever item was needed at the best price they could find. That’s no longer the case, which leads to the question of how Moore knows when it’s time to stop negotiating and sign the contract.

“When you have at least gotten something out of the deal that you wanted in the beginning,” she said, “and they also have received something. Sometimes, you don’t get everything that you want but you get something, both sides do.”

One of the first contracts she negotiated for the university turned out to be the one she remembers most, because it was the most complex, drawn-out affair involving the university, W&M Law School and the Virginia Institute of Marine Science. The contract started with IKON Office Solutions and lasted five years. Then, about the time a renewal was done, IKON was bought by Ricoh. There was no W&M print shop at the time, and that was incorporated into the deal, with Ricoh renting out space at Swem Library.

Three years later, wanting something better for the university, Moore wound up doing a contract with Xerox.

Donovan said she gets a special joy at bringing Moore into a meeting at Swem’s Media Center “because the procurements involved in renovating that space were so cumbersome.”

“Her work, in a quiet and behind-the-scenes way that is often invisible to students and faculty, permits them to have more content in the collections, better spaces to study, wonderful speakers and trainers who visit and teach, and a strong program of outreach that brings people into the library for services and events.”

Outreach is among Moore’s passions. For the past five years, she has worked with the Food Bank in Newport News, the Avalon Center in Williamsburg, and participated in food-collection special events “Tastefully Yours” and “Bodacious Bazaar.”

As a single parent who raised two children into adulthood, has a special, close bond with a granddaughter and now celebrates being a great-grandmother, Moore can identify with the struggles of those in need.

“I’ve seen a lot of people who have been homeless or hungry,” she said. “As a young person, I know how difficult it is to feed children on a very small salary."

“William & Mary students are passionate about serving others,” she wrote. “They are dedicated to community service and put their talents to work on tough, real-world problems. … Sherrene models the life lessons that are at the core of the William & Mary community."