Alumnus Tom Shannon ’80, diplomat, former ambassador, former acting United States Secretary and Deputy Secretary of State, returned to his alma mater for three days recently that were instructive and informative for everyone he encountered, but hardly restful.

Shannon delivered an “Insider Insights” talk on the crisis in Venezuela, lectured in a course on policy tools in national security, participated in a dinner seminar led by Associate Government Professor Marcus Holmes and provided advice on student Diplomacy Lab projects. He also delivered a public talk titled “A World of Your Making: How to Think About the 21st Century and Your Role in It.”

Following another lecture, Shannon answered questions from attendees about globalization, authoritarianism and his 35 years in the foreign service. He first highlighted the many changes he has witnessed throughout his career, which spans from the Cold War era to the present and identified what he believes will be the greatest challenges younger generations may face. 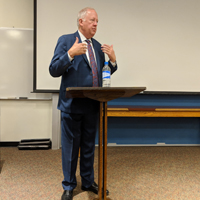 “I’ve realized I’ve experienced a world transformed,” he said. “And I’m thankful for it. I have played a small role in the realization of important national goals and the protection and advancement of goals of the United States.”

Shannon pointed to what he sees as the major drivers of change in the modern world, including the creation of the global economy, demographic changes and the transformation of power.

“I think as we’ve seen the creation of a global economy and the emergence of China and India, we’re seeing wealth being created and transferred from west to east,” he said. “There has also been a rise of a global middle class, which is becoming so diverse and embedded in the global economy that it is driving economic growth. It is a huge economic experiment with consequences for us and the world.”

Healthcare and expanding wealth have resulted in demographic changes in which the older age cohort is expanding and needs to be included in society.

“Then there are some chronically young societies, which has advantages and disadvantages,” he added. “With a young population that has access to a better economy, more opportunities and education, they have a big advantage. But sometimes these populations are vulnerable to non-state actors who can recruit them into conflicts. With a bigger and younger population, these conflicts are harder to end.

“When it comes to the transformation of power and the flattening of the world, the United States is the only remaining superpower. It has the ability to project its power anywhere at any time, but not everywhere at every time. So, we have to carefully think about engaging in different ways and make careful decisions about our involvement. This also means that regional powers rise with global ambitions and pursue their interests without the U.S. while considering how we’ll react.”

After sharing those views, Shannon answered questions from an engaged and eager audience. A William & Mary student asked about the future of globalization in the world.

“The globalization issue is never a binary issue,” Shannon said. “As we think through what its purpose in the world is, we have to think about how we want to structure it, since there’s no inevitability about the outcome. We’re in a period of retrenchment. For many Americans, the world has been about fighting someone else somewhere else, and watching jobs go elsewhere. That dynamic has to be changed in some way to allow Americans to understand what their push into the world is going to look like.” 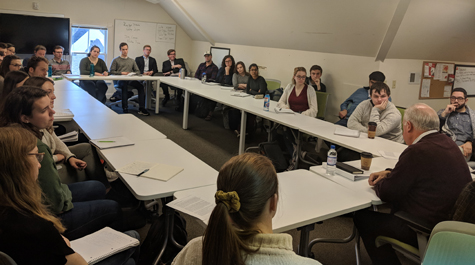 Asked about the rise of authoritarians, Shannon called it one response to demands being made of governments.

“But in many ways authoritarian leaders are almost as accountable as democratic leaders, because if they don’t respond to their public there will be consequences,” he said. “I think we have the capability to face authoritarianism down, and in the process, democracies will show that they have greater flexibility.”

He credited William & Mary with providing him with what he termed “the intellectual capability, emotion, and intelligence to understand opportunities,” but also “the confidence and purpose in life to take those opportunities as they are presented to me.”

“My generation was defined by duty and service,” Shannon said. “Your generation is (defined) by creativity and innovation. … Everybody does international relations today – every country, state, city and even every university. Increasingly, governments do not set global agendas; instead, they respond to new agenda items initiated by other actors. With that, you have an incredible ability to create and shape the world.”