“Why lavender?” William & Mary Board of Visitors member Doug Bunch asked an audience of about 150 at the university’s first-ever Lavender graduation ceremony last week at Trinkle Hall.

The answer probably stunned people unfamiliar with the LGBTQ community.

“It is a blend of the pink and black triangles that gays and lesbians, respectively, were forced to wear in Nazi concentration camps,” said Bunch ’02, J.D. ’06, the keynote speaker. “Historically it references stigma.

“But today we turn it on its head and wear it as a badge of honor,” he continued. “The color lavender memorializes the past – lest we forget it – but it also boldly blazes the path forward.”

Twenty-seven LGBTQ graduates, about three times the number anticipated when the event was announced, participated in a unique ceremony in which they were “donned” and awarded a commemorative pin by the family member, friend or supporter of their choosing.

“The fact that we had to move this event to a larger venue tells me that our students are part of a large community, a supportive community, and they want to be with that community on a day as important as this,” said Ginger Ambler ’88, Ph.D. ’06, vice-president for student affairs.

Roxie J. Patton, associate director of W&M’s Center for Student Diversity, joined the university about a year ago. She told the audience that she made it her “mission” to know the students she serves and to ”create a more welcoming space for LGBT students so they can thrive wholly and authentically.” In that vein, every aspect of the ceremony was crafted from student suggestions. 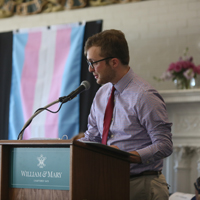 Patton sent an email several months ago announcing the event, and asking anyone who wished to speak to contact her.

“I wrote her an email with the first draft of my speech about a half hour after she sent it,” senior speaker John Hollander ’18, recalled, adding that he never thought such an occasion would be possible.

“You almost feel guilty you feel so good about it,” he continued, looking around the room. “We all shared experiences of finding out about ourselves, getting bullied by other people and working things out with our families, as in ‘we’re LGBT, we’re queer, what does that mean for us?’ One of the cool things is that we all put in the work at different parts of our lives and we’re all kind of reaping the benefits.”

In the presence of several other Board members, Bunch, who is gay, gave an extensive recounting of the university’s often-unpleasant history of dealing with its LGBTQ community.

“We acknowledge that there are LGBTQ people in this room who helped make this event possible who were not welcome on this campus when they arrived,” Bunch said. “We acknowledge that it took a gay faculty member to organize a support group for LGBTQ students in the basement of St. Bede Church in the early 1980s, that if it weren’t for his diligence in meeting with those students every Monday for 24 years -- bomb threats notwithstanding -- those students’ needs would not have been met.”

Bunch cited other discriminations, such as the struggle for the Gay and Lesbian Alumni Association to get the words “William & Mary” officially included as part of its name. He said that it’s only been in recent years that same-sex unions were allowed to take place in the Wren Chapel.

Bunch also pointed out that the environment at the university under President Taylor Reveley and others is markedly different today. Reveley appointed a task force on LGBTQ issues and led the call for domestic benefits in Virginia.

“Our former rector, Jeff Trammell ’73 – the first openly gay Board chair in the United States – joined him as did our current rector, Todd Stottlemyer ‘85,” Bunch said.