For McLaughlin, '20, it began when he was 16 and on a sailboat called The Brilliant headed from Mystic, Connecticut, to Newport, Rhode Island, for a tall ships festival. A 179-foot, three-mast tall ship passed by. McLaughlin was so impressed with the massive vessel that he started asking questions about it and following its exploits on Facebook.

Joining the crew of the Picton Castle became a goal of his.

“I’m 21 now, so I guess the Mystic sailing was a precursor in terms of the idea that sailing can have a purpose,” said McLaughlin, who majors in government and religious studies at William & Mary. “Sailing can be done as more than a recreational activity, can be more than the summer camp thing I did as a kid.”

Soon, McLaughlin will see the culmination of his five-year aspiration when he heads to Bermuda next week for a series of tall ships events in the Gulf of Mexico before officially beginning a 14-month voyage around the world. He will be part of a crew of 52 people, 12 professionals and up to 40 trainees. The crew is a mix of nationalities. One-third are Americans, one-third are Canadian and one-third come from various other countries.

{{youtube:medium|xegkKz8CGm0, Adventure on the high seas}}

According to a spokesperson with the Picton Castle, the ship will embark on its world voyage from New Orleans following the tall ships events. A blog by captain Daniel Moreland stated that the Picton Castle will sail about 30,000 sea-miles on its circumnavigation. It will cross the Caribbean Sea, the South Pacific Ocean, the Coral Sea, the Arafura Sea, the Timor Sea, the Southern Indian Ocean, round the Cape of Good Hope, cross over the South Atlantic Ocean, the Caribbean Sea and make a north bound passage the length of the North Atlantic Ocean.

Moreland wrote they expect to put into Panama, Galapagos Islands, Pitcairn Island, Mangareva, an Austral island, the Cook Islands of Rarotonga, Palmerston Atoll, Vava’u in Tonga, Viti Levu in Fiji, Espiritu Santo, Malekula, Pentecost, and Maewo in Vanuatu, Benoa in Bali, maybe Madagascar. They will sail around the Cape of Good Hope to Cape Town, South Africa, the Skeleton Coast of Namibia, Napoleon’s last refuge at St Helena and then ride the southeast tradewinds crossing the equator bound for the Eastern Caribbean. Islands like Grenada, Carriacou, Bequia, Martinique, Guadeloupe, Antigua, Anguilla are on the itinerary, before heading onward to Bermuda then back to its home port of Lunenburg, Nova Scotia. 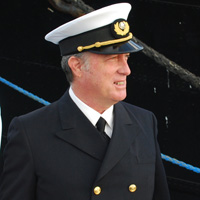 The ship, which is registered in the Cook Islands, and owned and operated by the Windward Isles Sailing Ship Company, Ltd., has three primary purposes: to promote maritime culture through long voyages, especially circumnavigations; to provide opportunities for cross-cultural immersion and interaction and engagement in the customs and festivals of the people they meet; and to distribute medical and school supplies.

“The last part is what I’m most interested in and what I think will have the greatest impact on me, everything from [distributing] textbooks to immunization treatments and clinics on various islands for five days a week,” he said. “There will be doctors on the ship but also some of the islands do have doctors or people who can provide medical knowledge but often lack the resources to do it. A lot of these islands don’t have highways or airstrips. They can only get one or two trade ships a year and most of them end up bringing food supplies, clothes, things seen as more immediate necessities than new textbooks or medical treatments.”

Not everyone gets selected to sail the Picton Castle. McLaughlin applied online, wrote essays and got letters of recommendation, all designed to display his sailing history.

A couple of months later he was summoned to Nova Scotia. He spent four days and three nights aboard the ship so the professional crew that works the vessel, one of whose missions is deep-ocean sail training and long distance education, could evaluate everything from whether or not he’d get claustrophobic to how he handled himself figuring out problems in the engine room. They showed him how to tie certain knots he hadn’t seen before and observed how long it took him to learn the methods. They tested his work ethic by having him paint bunks and do dishes, and watched him interact with the crew in order to evaluate his ability to get along with others.

Among his duties on board, McLaughlin will stand watch, take turns at the helm, raise the anchor, clean the ship, haul on lines, handle sails, scrub the decks, participate in daily ship maintenance, help in the galley and keep lookout, among other things. He is there strictly as a volunteer. There is no compensation, and he is earnng no academic credit. 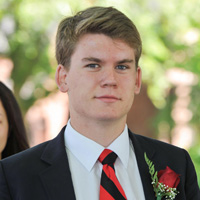 McLaughlin left Nova Scotia with a handbook and the admonition to become more physically fit.

“I’m trying to get more physically and mentally ready,” he said. “I’m doing a lot of physical exercise, using a modified version of what they told me to do and Google searches for overall body fitness.”

McLaughlin said that the ship, which has no refrigeration or laundry facilities, will spend three to five days on some of the smaller islands. They’ll extend those stays to about one week in places like Fiji, Panama City and Cape Town, South Africa, where they’ll take on supplies. Part of his job will be to help see that the cargo is stored in a way that keeps the ship balanced.

“Let me put it this way,” he said. “It’s not a vacation, but I could not be more excited.”