The Commonwealth of Virginia has long carried the stigma of “absence and erasure” when it comes to queer history, William & Mary Community Studies Professor of History and director of American Studies Leisa Meyer told those attending a recent conference on “Race, Memory, and the Digital Humanities” at the university. However, a research project she leads is helping to change that reputation.

The symposium included panels on “Colonial and Post-Colonial Digital Humanities”; “Trust, Memorialization and Community Participation”; “Race, Digital Humanities and the Region”; an artist’s talk and performance by Pamela Z and keynote speeches by Jessica Marie Johnson of Johns Hopkins and Gabrielle Foreman of the University of Delaware. It was funded in part by the Arts & Sciences Annual Fund.

Meyer spoke about the W&M LGBTIQ Research Project she is leading and its importance because, “Virginia’s work in queer activism has been really critical in terms of the national scene – and a lot of people have no idea.” 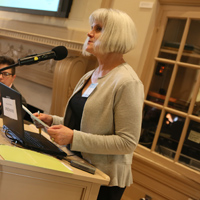 Twenty-five of Meyer’s students, nearly three-fourths of whom Meyer said were queer students of color, spent 2016 combing through archives located at Virginia Commonwealth University, the Virginia Historical Society, the Library of Virginia and the special collections at Swem Library, looking to “excavate and preserve knowledge related to LGBTIQ people and their experiences in our state.”

While often frustrated because the information found was focused almost exclusively on white gay men, the students uncovered a couple of significant, previously unheralded, accomplishments.

Five years later, students found, the William & Mary Gay and Lesbian Alumni Association was the key litigant in the trial that struck down one element of Virginia’s ABC laws, which prevented the serving of alcohol to “homosexuals, prostitutes, racial agitators, and felons,” among other groups. This federal court victory also had regional repercussions as many states used agencies like ABC boards to target individuals and groups who were deemed “unhealthy” or a “threat” to state citizens.

“One of the things you see in a lot of this is that there are parallels between the targeting of different groups at a time when massive resistance to desegregation is building in Virginia,” Meyer said. “There’s also a parallel focus on other kinds of deviants, other types of ‘threats’ to the state other than sexuality and race.”

This fall, undergraduate student researchers have begun collecting oral histories in conjunction with community partners such as Diversity Richmond (the former Gay Community Center of Richmond) and organizations such as Side by Side. Located in Richmond, Charlottesville and Petersburg, Side by Side staff work with LGBTIQ youth who are in various stages of exploring their sexuality or gender non-conformity and perhaps at issue with their parents.

The W&M LGBTIQ Research project has collected 38 oral histories through Diversity Richmond and an additional 16 with alumni of W&M.

“They were sort of shackled by what archives hold,” Meyer said, explaining the move to oral history. “Whose records get archived? Whose records get saved? Who agrees to put records in archives?

“We’ve focused on William & Mary and LGBTIQ alums of color. So we’ve tried to have those voices become primary and the lens through which LGBTIQ cultures, activisms, people, etc., are read.”

Meyer said that, in collaboration with community partners, the goal is to be “part of an effort to get out, to be part of a digital world and to get out a fingerprint in terms of LGBTIQ history in Virginia."