At the very beginning, they were hardly a couple anyone would guess would revolutionize the movie industry by creating a hero that epitomized everything Americans held dear.

John Wayne was a washed-up football player at the University of Southern California when his coach asked his friend and season-ticket holder, Western star Tom Mix, to get the kid a job. Director John Ford, a brilliant survivor from the Silent Film era, hired Wayne – then Marion Morrison -- as a prop boy and extra.

That began an often-touchy relationship lasting eight classic Westerns, including Stagecoach, The Man Who Shot Liberty Valance, Fort Apache, She Wore a Yellow Ribbon, Rio Grande and The Searchers. William & Mary Professor and Director of Creative Writing Nancy Schoenberger explored them in her latest book, “Wayne and Ford: The Films, the Friendships and the Forging of an American Hero.”

{{youtube:medium:center|L4RkZZ6Rhz0, How John Ford made John Wayne into a film icon}}

In addition to her own research, Schoenberger obtained insider knowledge from two film legends well versed in the relationship between the two men. She began by traveling to Ireland to interview Wayne’s favorite co-star, Maureen O’Hara, and also interviewed the director and film historian Peter Bogdanovich, who is something of a Ford acolyte.

According to a review by Pulitzer Prize-winning journalist Glenn Frankel, she succeeded in crafting a deep, thorough portrayal.

“Nancy Schoenberger analyzes and dissects the intricate blend of pride, dignity, courage, and violence that defines American masculinity as depicted in Ford’s films and embodied by Wayne’s characters,” wrote Frankel. “And she locates the hidden depths of vulnerability and self-doubt that help to explain and humanize these brilliant, troubled icons.” 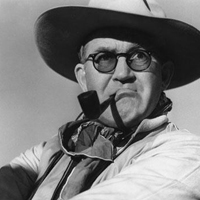 Schoenberger wrote about Wayne’s submissive nature towards Ford, whom he idolized, even when Ford often humiliated him during one of his frequent tirades.

“Ford was known to be a tough taskmaster on all of his sets, sometimes to the point of incredible cruelty,” said Schoenberger, noting that Ford once one of actor Harry Carey Jr.’s ribs. “And he picked on John Wayne the most. It went beyond tough love; oddly enough, John Wayne never faulted him for it. He felt that he was a newcomer who didn’t know anything about acting; Ford was the master.

“When Wayne was just starting out, he wasn’t even sure he wanted to be in the picture business. But he admired Ford, wanted to be like Ford. Wayne worked for him, was trained by him, so there was always an imbalance in their relationship.”

Under Ford’s sandpaper-coarse exterior, Schoenberger said, beat the heart of a sentimentalist at odds with his two selves.

“This was a tough guy who loved to be around tough men – the extras, stunt men, who were really cowboys who found a second life after leaving the rodeos – but in actuality he was very sentimental, cried easily, and was a little embarrassed about his artistic side,” she said. “He really had the visual heart and soul of an artist, though he was ashamed of it and tried to cover it up with his gruff, overcompensating manner.

“John Wayne was an interpretive artist, but John Ford really pulled these pictures out of his heart and soul.”

Ford also battled alcoholism, though not in the conventional sense of the word.

“He was an off-the-charts alcoholic, but he always made a point of not drinking when he made a movie, and he made 140 pictures,” Schoenberger said. “So that’s a lot of time sober. But when the films were over, he’d go on benders like you couldn’t believe.” 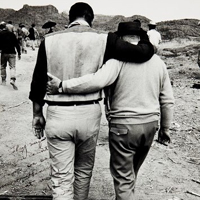 What’s the appeal in exploring their lives?

“What I look for is not a cradle-to-grave biography, but rather to find an interesting way in, either a partnership that has been somehow neglected – like just focusing on the Burton-Taylor movies, from the great to the ridiculous – and of course with Wayne and Ford,” she said. “I cover eight of the Westerns they made. It was that partnership that interested me.

“With Oscar Levant, I guess I’m drawn to eccentric outsider artists and geniuses. He’s still not very well remembered but he was an brilliant pianist and wit, well known for his interpretations of Gershwin’s music, and also known for his early prescription-drug abuse and struggles with bi-polar and obsessive compulsive disorders.

“You can’t say that John Wayne has been forgotten, but I am drawn to these larger than life figures.”

Schoenberger taught a class last semester on Westerns, and was surprised to discover that 13 of her 16 students had never seen one. That hurt, because the genre has been a staple of her life, and explored subjects that remain fresh with the public even today.

"So many television Westerns of the '60s and '70s dealt with issues of racism, mistreatment of immigrants and of women, and even gun safety," she said. "Marshall Dillon was forever taking guns away from miscreants in "Gunsmoke." "Bonanza," for example, often championed immigrants and their right to settle the land. As these were morality tales, it was clear who the good guys and the bad guys were."

“For my father and other World War II and Korean War veterans, the John Ford Westerns and, particularly, John Wayne, were the men to emulate," she said. "For my father, and many men, that was the model of right action, and that interested me. Ford and Wayne helped to create this ideal of the American hero.”

Yet, she acknowledged, getting into Wayne and Ford was far more personal than mere literary interest.

"When my father was ill and in a nursing home, dying, and couldn't do much of anything for himself, he got through the day just by watching John Ford and John Wayne Westerns," she said. "It meant so much to him. When I could, I'd watch them with him, ancf it meant just as much to me.