by Jim Ducibella |  June 29, 2017
Nine children, representing citizens in Montgomery, Alabama, in December of 1955, sat on the stage of Andrews Hall, pretending to ride a bus. There was an open seat at the front.

A 10th child, an African-American, entered and sat in the vacant space. The other riders turned in disbelief. They scowled. Hands waved at her to get to the back. She shook her head.

Moments later, 10 children lined up on stage as if in the starting blocks at a track meet. Then they took off in slow motion, pretending to run and jump.

And that’s how the students at this year’s Greater Williamsburg Women’s Association Cultural Arts Experience paid homage to Rosa Parks and Jesse Owens, the track-and-field star who was a four-time Olympic gold medalist at the 1936 Games in Germany, hosted by Adolf Hitler.

For the fifth consecutive year, the GWWA and William & Mary’s Muscarelle Museum of Art brought 30 middle-school students from James City County, Williamsburg and York County to campus for one week of education in African-American art, poetry, literature, dance and cultural heritage. The program, held June 19-23, initially was developed by Danielle Moretti-Langholtz, adjunct curator for Native American art at the Muscarelle in collaboration with the GWWA. Friday, June 23, was devoted to presenting parents and other interested parties with the work done over five intense days of study.

As the dancers executed their brief routines, Leah Glenn beamed with pride. Glenn, an associate professor of dance at W&M and a member of the GWWA, was their dance instructor. It was clear from the expression on her face that the lessons had gone well. 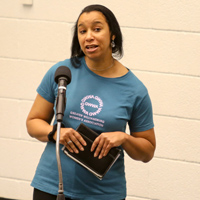 “I wanted to give them a brief introduction to contemporary dance technique, improvisation and the use of improvisation as a means of creating dances,” Glenn said. “In this program, they emulated and were inspired by historical African-American figures.

“We used improvisation as a choreographic tool, and they came up with some very unique and abstract movements.”

Literature and poetry instructors Charles and Barbara Bell titled their week of study “Hidden Figures,” after the film about a trio of African-American mathematicians whose behind-the-scenes work helped NASA successfully launch John Glenn into space in 1962.

Barbara Bell is the homeless education facilitator for WJCC public schools. Her husband is the lead math instructor for Newport News public schools and teaches at Crittendon Middle School.

“We wanted them to research African-American scientists and inventors, poets and musicians, people who were not so well known,” Charles Bell said. “I provided them some resources for lots of African-American inventors, patents, patent dates and even a list of women in science, technology, engineering and mathematics.

Each student created and delivered a 30-second PowerPoint presentation. 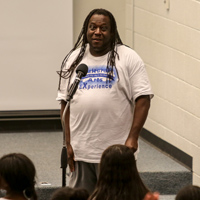 Student Kirstyn Davis, an eighth-grader at Berkeley Middle School, wrote about Ruby Bridges. In 1960, Bridges became the first African-American child to attend an all-white elementary school in Tylertown, Mississippi. Her first year, she was the only student in any of her classes because white parents refused to let their children sit with her. She ate lunch by herself, could not take part in recess and was driven to and from school.

“She had to deal with all the white people who yelled at her,” Davis said. “It made me feel proud that she did that just for us so that we could be put together and not segregated.”

Another student wrote on Alexander Miles, who created an automatic device to open and close elevator doors. He was awarded the first patent for an electric elevator.

Art instructor Steve Prince wanted to impart the idea that while they might be one individual, they are also part of what he called “a communal body.”

“I shared with them, for example, the story of six guys in Alexandria, Virginia, in 1939,” said Prince, who is assistant professor of art and black studies and artist-in-residence at Allegheny College in Pennsylvania. “They sat at the library when it was not lawful for them to do so. They were arrested. One of the kids’ fathers was a lawyer. He fought the case in court and won it. In 1940, public libraries were integrated. I said to them, ‘Look at the power of that collective.’” 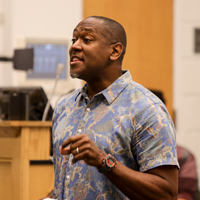 To build an immediate sense of trust, Prince paired each student with a stranger. Students covered their faces with Vaseline, after which their partner placed plaster strips over all but their nostrils, ultimately creating a mask that became part of the group’s final project.

“I want to really create a sense of bonding, a sense of community as quickly as possible,” Prince said.

In the end, each student incorporated their mask into art that reflected their sense of self-worth. The masks were then affixed to a huge triangle, which Prince described as “one of the strongest forms architecturally and physically within nature.”

Lanyia Williams, an eighth-grader at Queens Lake Middle School, said the mask represented her character, and she decorated hers with the sun, which to her stood for “unity.”

“It seemed hard, but as Mr. Prince broke it down it was much easier,” she said. “I put different elements of my personality on it to make it seem like it’s who you are and no one can change that.”

Samara Triggs, also an eighth-grader at Queens Lake, said that about a year ago she started teaching herself art when she came across artwork from Blue Ocean and Jerry Ham Sandwich on her cellphone. 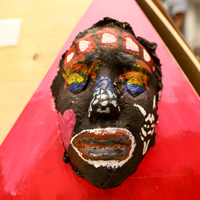 She returned to the Cultural Arts Experience for a third, and final, time to learn more about the process of creating works of art.

She decorated her mask in African colors: orange, olive green and many others.

“I thought it would be cool to show people my creativity with something,” she said.

GWWA President Marilyn Taylor opened the program by thanking the parents in the audience for allowing their children to attend.

“Your children have been exceptional during these five days,” she said. “You have entrusted them to our care. Their behavior has been exemplary. Every one of them has participated and stayed engaged.”