Maybe it is their wedding photo. Maybe it was taken after they became engaged. Maybe they were on their way to their honeymoon and she was getting ready to toss the bouquet.

Who are these people?

On either the night of July 31 or early the morning of Aug. 1, someone slipped a photocopied picture of a smiling couple under the west doors of William & Mary’s Wren Chapel, the ones that face the Sunken Garden. Robert Watkins ’18 was assigned to open the chapel that day. The west doors are supposed to remain locked at all times, but when he has proctor duty Watkins checks them just to make sure. This day, laying face down, was the backside of an 8.5 by 11 piece of paper on which was scrawled “Married Here in 1947.”

“The age of the couple was the first thing that astonished me,” Watkins said. “Also, this seems like a very deliberate action. Whoever slipped the paper under the door had planned to leave it for us, since they had to print out the picture and bring it with them. It seems to me that maybe the couple — or their children — came to celebrate their 70th wedding anniversary.” 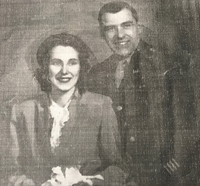 Could the couple still be alive 70 years later? They don’t look like “youngsters” in the picture. Perhaps Watkins is right. Perhaps it was one of their children. Maybe it was a grandchild.

No one knows. Well, someone knows. They just aren’t sharing the details.

The Wren Chapel hosts between 60 and 80 weddings a year, said Kimberly Renner, who has worked in the historic campus for nine years. She added that she has never experienced “anything like this waiting for us in the chapel.”

The gentleman is wearing an Army dress uniform but the photocopy left at the chapel is much too dark to tell what rank he has achieved. According to W&M’s military science department, the insignia on his lapel would indicate that he was an engineer, and the four stripes on his sleeve indicates that he had served four combat tours of one year each.

She’s not wearing a wedding gown, but Renner said that’s not that unusual for the times.

“My grandma got married in 1938 and did not wear a wedding gown but rather a royal blue velvet dress,” she said. “In most family and historical pictures I’ve seen from that time period and before, women wore dresses that were not what we would describe as traditional wedding dresses. That tradition is just starting to kick off in the post-war period when this couple would’ve been married.

“So they may have chosen not to participate in the new wedding dress trend, or the picture could be her going-away dress following the ceremony. And they also could’ve gotten married without a lot of advance notice.”

After finding the photocopy, Watkins showed it to Samantha Nussbaum ’18, a Spotswood Society member who began working as a proctor — opening and closing the building — at the start of the summer.

While the photocopy mystery is a unique occurrence for the Wren, Nussbaum said that the scene it likely represents frequently plays out in the flesh.

“Older couples come into the Wren all the time and tell me about each other — falling in love, and getting married in the chapel,” she said. “Earlier this summer, a couple came in, and the husband told me that his wife’s memory is beginning to fade so he wanted to take her to all of the places that were important to them to try and keep her memories from failing entirely.

“It was so sweet seeing them standing where they got married so many years ago and still be in love.”

Whoever slipped the picture under the Wren Chapel door doubtless would agree.