In Casey Schmitt’s mind, something doesn’t make sense. The Andrew W. Mellon Foundation and the American Council of Learned Societies recently offered her the tools to prove it.

Schmitt, a Ph.d. candidate in History at William & Mary, is one of only 65 scholars to receive a 2017 Mellon/ACLS Dissertation Completion Fellowship. Chosen from a pool of more than 1,000 applicants, Schmitt will receive $30,000 and up to $8,000 in research funds and university fees to help with her final year of dissertation writing.

The 11-year-old program, which is made possible by a grant from The Mellon Foundation, also includes a faculty-led academic job market seminar, hosted by ACLS, to further prepare fellows for their postgraduate careers.

Schmitt, who earned her undergraduate degree at Arizona State University and her master’s at the University of Utah, said she came to William & Mary in part because of its “amazing early American history program. The Omohundro Institute gets scholars in all the time. It’s an incredible environment.”

As for her research, Schmitt said that traditional accounts of the Caribbean in the 17th century portray it as either lawless and infested with pirates, or settled by distinct empires. Schmitt had issues with both portrayals.

In the 17th century, many Caribbean islands were shared by people from different parts of Europe, whether French, British or Spanish. St. Kitts, for example, was French and English. This meant that many places developed local understandings about the legality of slavery and servitude.

In fact, it wasn’t until near the end of the 17th century that these empires began exerting substantially more influence over their colonies than before. This meant drafting formalized laws for issues such as slavery, which superseded earlier ways of managing labor.

“In the Caribbean in the early 17th century, people on the ground weren’t lawyers referring back to legal statutes in Europe,” said Schmitt. “They were working things out on the ground. I’m arguing that there’s actually a group of people who had a way of doing things and then empires told them not to, and that makes it look illegal by the time you get to the 18th century.”﻿ 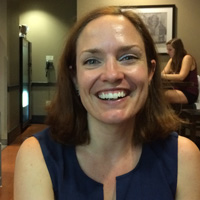 Schmitt felt so passionately about her theory that she decided to write her dissertation on the subject. Then the issue became how to prove her argument.

She traveled to England, looking for material from before the 1660s. She found very little. She traveled to France, with the same result. Documents from that period housed in Caribbean archives generally hadn’t survived because of the excessive humidity.

“I went through almost an entire year of ‘I don’t know what I’m doing, don’t know if I’m going to be able to write this project,’” she said.

But Schmitt also reads Spanish, and on a whim journeyed to Seville last spring. There she found what she called “this huge trove of documents.”

“What would happen is that English and French mariners who were populating the islands would be captured because they were pirates as far as the Spanish were concerned,” she said. “They’d be interrogated, and these interrogations are 20 pages long, describing what the islands looked like, what kind of laws were in place, what the populace was like, information on fortifications, the things the Spanish of the day are concerned with.

“For me, this is a rare window into what this early period looks like.”

Schmitt will soon be traveling to The National Archives in England and the Archives Nacional d’Outre Mer in France to compare what she found in Spain to a few additional collections there.

Should all go well, Schmitt will finish her dissertation within a year.

“I’ve been really lucky to work with great people, like my advisors Brett Rushforth and Paul Mapp,” she said. “Both have really helped me develop this project.”