The subject of his dissertation, if not the work itself, seemed cut and dried to James Padilioni.

He would connect jazz to plantation music, starting with music produced by slaves on the plantations of Tidewater, how it evolved and was flavored by the influx of people of color from New Orleans and other cultures until it became its own genre.

And then he heard about the jazz icon who taped a prayer card of a saint to the front door of her Manhattan apartment in the 1980s.

Nothing about his academic endeavor has been the same since. 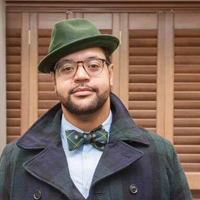 Padilioni is a doctoral candidate in American studies at William & Mary, and has been involved with a graduate affiliate program in Africana studies. He left recently for Lewis & Clark College in Oregon, which offered him a Consortium for Faculty Diversity fellowship to teach African-American history from 1863 to the present this fall.

“One of the nice things about the William & Mary American Studies Program is that we’re able, through advising, to work out a way to position our research within three or four different disciplinary frameworks,” he said. “I describe my research as drawing from the methodologies of history, ethnography and cultural studies.”

Although he also will be on the Lewis & Clark campus during the spring semester, Padilioni will primarily be free to work on his dissertation in residence, putting him back on the winding path to places and characters he never envisioned.

The cabaret star and Brother Broom

The woman with the prayer card on her door was Ada “Bricktop” Smith, who owned and performed at a series of trendy nightclubs in Paris starting in the 1920s. Among her many famous regulars was Cole Porter, who hired her to perform at parties at Chez Bricktop, and once asked her to teach his guests how to dance the Charleston.

The more Padilioni researched jazz periods such as the Harlem Renaissance, the more he was struck by how many of the performers were Catholic, Smith among them. She, and many others, had an especially deep devotion to a saint whose name Padilioni, raised a Catholic, never heard before: Martin de Porres. 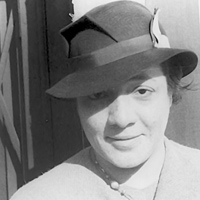 As his research evolved, so did the title and thrust of his dissertation, to what he now refers to as “Black Ecstacies: Remembering the Diaspora Through St. Martin de Porres.”

Born in 1579 in Peru, de Porres was the illegitimate son of a Spanish nobleman and a freed African slave from Panama. He spent part of his youth in servitude to a surgeon/barber, where he learned some basic medicine.

At age 11, he wanted to join a Dominican priory, but was rejected because descendants of Africans were barred from becoming full members of religious orders. Instead, he took work as a “donado,” or lay brother, at the priory, performing janitorial services for the right to wear the Dominican habit. He spent so many hours sweeping the priory that he was derisively dubbed “Brother Broom.”

But de Porres also continued to practice medicine, welcoming poor and enslaved Africans into the priory – where they were forbidden to be – to feed and heal them.

“So now, all of a sudden, I had an interesting jazz story, and an interesting saint story,” Padilioni said. “He’s doing janitorial work, but he’s also in the infirmary because of his skills. He’s turning the place into a hospital.”

At the age of 34, de Porres was permanently assigned to the infirmary, although he spent as much time as possible on the streets of Lima, tending to the poor. That choice made him unpopular at the priory; some of the Dominicans referred to him as the “mulatto dog.”

“He was always in trouble for healing people,” Padilioni said, “and he was frequently told not to do it.”

Stories soon surfaced from people who said they witnessed de Porres levitating, of being seen in two places at once, of literally holding conversations with animals, even of convincing the mice in the priory to stop eating the grain in the kitchen.

When an epidemic broke out at the priory, 60 friars fell ill and were locked in their rooms. According to legend, De Porres tended to them all, passing through locked doors to stand beside their bed to heal them. 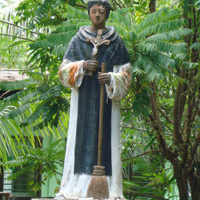 In the 1850s, the son of a woman who was half-Indian, half-African, told the story of de Porres coming upon someone who was falling to the ground after losing his balance on a rooftop. The storyteller said that de Porres froze the person in mid-air, ran to the priory and asked the prior for permission to save the person.

His request granted, de Porres raced back to the scene of the accident and brought the person slowly back to earth unharmed.

“The church wants you to think that he was this very humble, dutiful servant with a broom, but these and other stories show that people of color wanted his magical power to be this challenge of authority.”

Padilioni said while de Porres may have been a Peruvian legend, when other black people in the Americas found out about de Porres they created their own legends about him.

And that led Padilioni to perhaps the story’s strangest twist.

Brother Broom as a cultural icon

From 1935 to 1940 in and around Harlem, Padilioni said, de Porres’s presence was practically everywhere one looked.

He has seen photos of people dressed like de Porres attending costume parties. There was an official Martin de Porres Guild. There was an off-Broadway play about his life. There was a halfway house connected to a church where strung-out jazz musicians went and in the process of drying out learned about de Porres. Street vendors sold statues of de Porres.

“They like the fact that this black person might become a saint in the biggest and maybe oldest institution in the world,” Padilioni said. “You have the factor of the ‘saintly American negro,’ as they were describing him. These are not Catholic people; he has appeal outside of the church.”

He was even popular in the Harlem gay subculture.

“By this point, the Catholic Church clearly wanted him to become a saint, and was putting out its own stories,” Padilioni said, adding with a laugh, “but the queer Harlem angle certainly wasn’t the direction the Vatican wanted to go.”

Our Lady of Lourdes Catholic Church was founded in Atlanta in 1912. Abutting the property is Ebenezer Baptist Church, where Martin Luther King, Sr., and Martin Luther King, Jr., were co-pastors, and where the civil rights leader was baptized as a child. 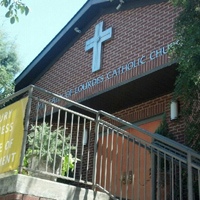 In the 1950s, Padilioni said, Our Lady of Lourdes housed a seven-foot tall statue of de Porres on its grounds. In the 1960s, the St. Martin’s Human Relations Council held meetings at the church, and its members participated in the marches that King and his father planned right across the street.

“The two Martins kind of merge,” Padilioni said. “You have the ministry of Martin de Porres, and the charism of social justice and poverty absorbed into the Martin Luther King civil rights movement. You’ve even got Catholic nuns down there picketing against police brutality.”

By 1962, de Porres had passed the three stages required for sainthood in the Catholic Church, including miracles attributed to him from 1948 and 1956, more than 300 years after his death. On May 6 of that year, Pope John XXIII canonized him and named him the patron saint of people of mixed race, innkeepers, barbers and public health workers. 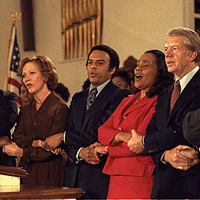 In 1964, King was invited to the Vatican to meet Pope Paul VI. Among the places King stopped in Rome was the home of Ada “Bricktop” Smith, who at age 67 had closed her club and retired. She later moved back to the U.S.

Five years ago, Our Lady of Lourdes in Atlanta produced a 100th anniversary commemorative album. The background music to the church’s litany of saints was black gospel genre. Only African saints were mentioned, de Porres chief among them.

But King and wife Coretta Scott King also were included, an honor that technically couldn’t happen because neither was Catholic.

“It’s the mixing of what’s orthodox and what’s not,” Padilioni said. “Martin Luther King is kind of a saint the way we think about him. A lot of the practices of cultural memory that made Martin de Porres a saint have gone into making Martin Luther King a folk saint, too. There’s this amazing connection between the two.”