Photo - of -
by Jim Ducibella |  February 13, 2014
Leaving Germany for the United States in 1939 literally allowed Werner Weingartner, then a Jewish child, to have a life. He used a good portion of it to teach high school mathematics in New York.

Now long retired and living in Williamsburg, he wants to leave something significant behind, and he wants to employ William & Mary to unite students from all around the world in an effort to make the future brighter for generations to come.

In that spirit, W&M hosted the first Weingartner Digital Citizenship Forum at the Mason School of Business on Tuesday. Presented by dotDemocracy, the forum gathered technology experts from across the country to discuss how the Internet can affect government and political culture.

DotDemocracy and the Digital Citizenship Forum were made possible by the generosity of Weingartner and the Weingartner Global Initiative, administered by the Roy R. Charles Center for Academic Excellence at W&M. DotDemocracy is a nonpartisan organization founded by eight students who were selected as Weingartner Policy Fellows in December 2012.
Months ago, the following Weingartner Digital Citizenship Challenge was issued to high school and college students in the United States and its territories who were born on or after March 1, 1987: Propose a “creative new idea to help make the Internet, including all forms of social media, a better tool for strengthening democracy.” Proposals didn’t have to be technical, just realistic and forward-looking.
Hundreds responded with ideas. 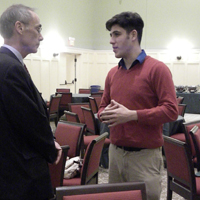 Imagine creating an app dedicated to providing citizens with information on government and private services around them, something that would be a solution to the problem of citizens being uninformed about what is available to them in their area.

Sammer Zeglam of the University of Texas-Arlington imagined it, and was declared the 2014 Challenge winner by a distinguished panel that was assembled by Nicco Mele ‘99, founder of Echo Ditto and adjunct lecturer at the Harvard Kennedy School of Government.

The panel: Adam Conner from Facebook; Sam Novey from TurboVote; Max Novendstern from Our Common Place; Anthea Watson Strong from Google and former director of voter services for Barack Obama; and Laurenellen McCann, executive producer of “The Good Fight” with Ben Wikler and former National Policy Manager at the Sunlight Foundation, a nonprofit organization that champions increasing government accountability.

In a video presentation, Zeglam said, “This app will display all services in a user’s area and even direct them using their already built-in GPS app to where they can receive such services. By creating a more informed citizenry, this app would serve as a way of aiding people in their navigation of the many resources available to them in their area.”

“At the end of the day, even though I work for a tech company, I’m basically a community organizer at my core,” he said. “I think that this idea has an amazing variety of organizing applications ... If you made it possible for civic organizations to be the gateway to those government services, I think that could be a very exciting possibility.”

William & Mary student Michael Payne ’15 finished second. He proposed a participantory budgetary website that would allow citizens to become directly involved in the process of proposing and editing budgets at the local level.

“It’s an idea I’ve had for a while,” he said. “I got it from reading articles in The New Republic and various other publications about participatory budgeting programs happening in South America and some American cities.

“It just seemed like a really interesting way to give control over the government back to citizens rather than just elected representatives or business interests that might control the budgeting process more than citizens. It seemed like a good way of empowering citizens.”

In voicing her support, McCann offered several examples of where models akin to Payne’s are already in use.

“The last few years it’s been used in New York City, and most recently in San Diego,” she said. “It in itself is a form of civic engagement. There’s a rising tide of people who are submitting (their ideas for) budgeting online, and we’d love to see more opportunities to contribute to the dialogue. There’s still a need to do it well.”

Weingartner explained that his initiative actually followed a script penned by Emery Reves, for whom W&M’s Emery and Wendy Reves Center for International Studies is named.

“If we could (only) unify students here at W&M, the home of Thomas Jefferson and other very influential people, to give attention to global problems. I also want them to reach out to other domestic colleges -- Harvard, Yale and so on -- and try and unify students ... see them branch out to other schools to form a coalition of students who can use their influence to observe and handle global problems.”

Earlier, the panelists opened the evening by discussing the potential for the Internet to enhance several aspects of the United States’ democracy -- civic engagement, civil discourse, an informed citizenry and delivery of government services, among others. Later, panelists continued conversations with students over dinner.