Photo - of -
by Tribe Athletics |  July 2, 2014
Andrew Strait '14 was voted the Colonial Athletic Association's male scholar-athlete of the year on Wednesday, adding to an already historic list of accomplishments. The male and female scholar-athletes are voted by the league's schools from among the winners in each sport throughout the year (10 men, 12 women).

Strait is the sixth Tribe man to win the award in its 12-year history, and the third in the last four years.

Only six athletes in the CAA have ever won three consecutive scholar-athlete awards in their sport.  W&M now has 54 total scholar-athletes of the year, 21 more than any other school, and six year-end scholar-athletes of the year, twice as many as the next-closest school.  Strait wrapped up his stellar Tribe career with a brilliant week at the CAA Championships in February, taking home six gold medals and leading W&M to second place in the closest-ever meet in conference history. He won all three of his individual events, the 200 IM, 100 breast and 200 breast, for the second year in a row, and also claimed gold on the 800 free relay, 200 medley relay and 400 medley relay while taking silver in the 200 free relay. 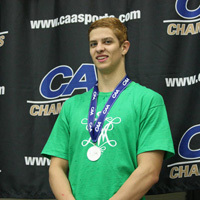 Strait finished his career with six individual conference championships, four relay championships and 10 total gold medals, all school records. In 2013-14, he led the Tribe with 22 victories and ranked second with 377.5 points, and was named the CAA Swimmer of the Championships for the second year in a row.
Strait graduated holding W&M's records in the 100 breast, 200 IM, 400 IM, 200 free relay, 800 free relay, 200 medley relay and 400 medley relay. He totaled 1,300.5 points in his four years, second-most ever, and his 77 career victories ranked third all-time. Strait swam at the 2012 U.S. Olympic Trials in three events.

Strait was named to the CoSIDA/Capital One Academic All-District first team in 2013 and 2014, and to the CSCAA honorable mention all-academic list. At W&M's athletics award banquet in 2013, he won the Bruce Davidson Memorial Award, given to the top rising senior men's athlete in the entire department.